I have attended many concerts by tribute bands in SL, but this was my first visit to a tribute sim.   Created by MICHAELjackson Follet, NeverLand Valley is devoted to honoring, remembering, and celebrating the best of Michael Jackson’s life.   It is located at NeverLand  (247,250,25).  This isn’t a new site, but it was new to me.

The site is amazingly true to the RL Neverland Ranch that existed in Los Olivos, California from 1988, when Michael Jackson purchased it, until 2005.   During those years, the 2500 acre Neverland Ranch was Jackson’s home as well as a wonderland for visiting children.  There was a petting zoo, amusement park, two trains, and other attractions.


In the SL version MICHAELjackson Follet has recreated the amusement park, zoo, a train, a large home filled with Jackson memorabilia, and beautiful gardens.     Make sure your music is enabled when you visit.   While I was there I heard  "We are the World", "Things I Do for You", "Another Part of Me", "Bad", “You are My Lovely One”, “Dancing Machine”, and others. 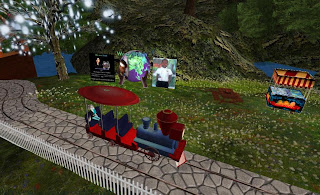 There are reminders when you enter that this is a unique, memorial site.     A note states, “Neverland is my Home...I created Neverland as a home for me and sharing with others. (MJJ).   Respect each other and you are the most welcome.  Feel free to go around, play, enjoy or simply relax.  It's all for love.”    There is a reminder that visiting residents may experience different emotions when recalling Jackson’s memory, and visitors are urged to respect their privacy.  There were other residents there on the three occasions that I visited, but no one was chatting.   We each seemed to be content with remembering this special and talented man.


When you enter the gates you can pick up a free Smart Car to drive or you can walk on the stone walkway to the house.   The two-story house is huge, with a library, multiple sitting rooms, pianos, and many portraits of Michael Jackson on display.   Upstairs there is a bedroom with Shirley Temple photos and other children’s items.  In one of the offices there is a framed copy of a RL legal document relating to the Ranch hanging on the wall.    My only criticism is that I wish there had been a few notecards describing some of the items.   Everything is very interesting, but I left wanting to know more. 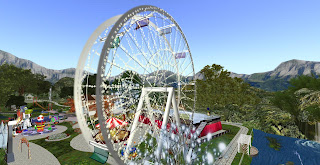 The gardens surrounding the house and open areas are beautiful.   There are bridges to cross and ducks and swans to watch.   Benches are available, too.


In the amusement park, MICHAELjackson Follet provides SL residents with many of the same type of rides that Michael Jackson owned.     There’s a Galleon swinging ride, the kind that always makes me sick in RL, a huge Ferris wheel, Merry-go-Round, Lollipop carousel, and a few more.   I rode these rides, and they are great.


Nearby there is a theatre, too.   In the entry are images of toys and characters from favorite children’s stories such as Snow White and the 7 Dwarfs, ET, and Pinocchio.     In the theatre section there are plenty of comfortable seats.  Unfortunately I couldn’t get the video to play, which I’m sure was caused by my system limitations. 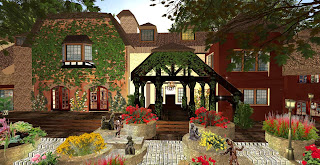 I was able to view many videos created by MICHAELjackson Follet on his website, http://mjfollet.com/Neverland.html.   My favorite video is the one located on this first page.  Entitled “Forever Neverland”, it shows images of both the SL site and RL photos of Michael Jackson.   While the images are shown, Michael Jackson sings “Have you Seen My Childhood?” and “Smile”.   Although I only know a little about the abuse and loneliness he experienced as a child performer, I found the video to be very moving.


Next to the amusement park is the zoo, found at NeverLand (52, 96, 22).  As you walk toward it, moneys wave and birds fly by.  Be sure to approach the animals slowly so that they have time to become animated.   Touch them to hear their sounds.     Michael Jackson would have loved the SL version of his zoo.  There are no cages, and while the lions and tigers growl, they don't bite.


Another amazing thing about NeverLand is that everything here is free.   There are no tip jars and almost nothing is sold here.   Inside a building located in the amusement park there are a few children’s items that appeared to be for sale, but they are discretely hidden away.      All of the rides, cotton candy, and other items are free.


The site and its members do support a RL charity in Haiti.   Tucked against one side of the sim, at NeverLand (142,247,26),  is a display where donations for “Haiti’s Children” are accepted.   There is a picture of Mideau Pierre, a child that is being supported by Neverland Friends and donations from other SL residents.    They have been supporting him since 2010.   At the time of my visit, they had collected  $44,169L in the donation box located there.


SL NeverLand Valley is a unique site that honors and celebrates the life of one of the most talented musicians of our time.
Grey Lupindo
Editor's Note: Following the death of Michael Jackson, a number of tributes were created in his honor, one of which was featured in Second Life Newsepaper. Neverland might have been among them, but most of the others are gone. As for the real life Neverland Ranch, it was sold in 2008 due to Michael Jackson being deep in debt, and fell into disrepair following his death. Recently there was a partial restoration with what was left of the amusement park rides replaced with a zen garden.
Posted by Bixyl Shuftan at 6:00 AM