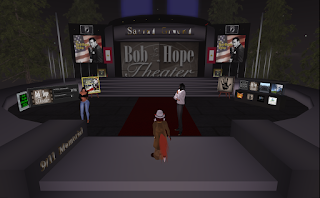 The Bob Hope Theater has made the news a couple times recently, doing shows in honor of veterans. I recently had a talk with the owner and builder of the place, Paul Woodrunner, who runs it with the help of his partner Morganna1Wulfsong Resident. We met in front of the theater stage, which had it's curtains closed and the seating wasn't placed. "The chairs are not in the theater," Paul explained, "I only put them down before the show."

To younger residents who might not remember, Bob Hope was an entertainer whom performed many acts for American troops for several decades from World War Two to the Gulf War. "Bob Hope brought entertainment to the troops around the world. His shows gave a part of the world back to them. He was a bit of sunshine in their lives, something they never forgot. Troops at war, and there was Hope.  The Medal of Honor Society made an award, the Spirit of Hope, to honor his bravery and courage for so many years." 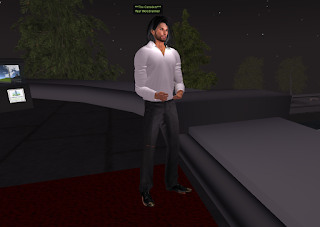 When I asked how long the theater had been around, Morganna answered, "Oh gosh, well, it traveled to different veterans sims but came back here to stay in what, August?" Paul added he set up the theater at it's current location, "after July 4th. I chose to not go on the road anymore. The Outsiders are about vets and bringing about an awareness of veterans, and sometimes their needs. It is about heroes mainly. The Outsiders are the dance troupe that calls Bob Hope Theater home. We are all about first responders  veterans active duty military. ... so many things I need to do to prepare for this show. It has to be part educational as well as entertaining."

The theater has several events a year, "We try to do six shows a year. We do mostly military or US holidays like Veterans Day, Memorial Day,  9/11 Patriot Day,  we do a welcome home Vietnam vet day show, we do a 4th of July show." 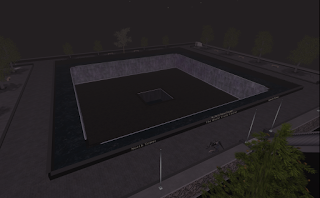 Just behind the theater is a memorial to the fallen at the World Trade Center on September 11, 2001, "The Ground Zero Memorial is a true tribute to those lost in 9/11." It was a build of the North Tower pool at the September 11 Memorial in New York City, a huge black marble square, with water running down the walls of the inside, going to a smaller square in the center. "I'm most proud of it," he went on to say, "I hope it lasts a long time."

Paul stated he had one other 9/11 Memorial, this one located elsewhere in the sim, the Flight 93 Memorial, also called The Tower of Voices." Tping to the location, we were on a square with an eagle picture in the center with a National Park Service sign, "Flight 93 Memorial," and a trail leading on. "Let us walk the path to the tower," Paul spoke as he and Morganna led me down, the route winding around and taking me to the tower. 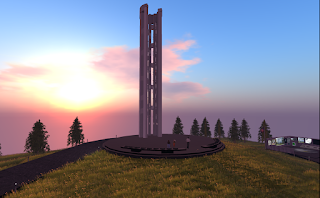 In real life, the memorial is still unfinished. But here it is. The Second Life memorial is a 93 foot metal structure with 40 wind chimes. "It is now open but still under lite construction. The tower is a musical instrument, with 40 chimes all different in sound to represent the 40 passengers and crew who died on flight 93. It is a place for honor, this is sacred ground." Morganna told me, "If you have the music down, you can hear the voices coming from the tower, representing all those lost who fought." "When you get closer you will hear it, if your media is on. Photos at sunrise and set are awesome."

Paul also owns and runs the Empire Room, a venue located elsewhere on the sim.

Paul had to leave to take care of some business. Morganna would say, "He really is very modest. I really just think that what Paul has built comes from the heart. He sees something that touches the hearts of people, and he tries to create the same here so that no one is forgotten. When the dance troupe performs at the Bob hope it is with that same spirit, and this really is a fabulous sim overall." 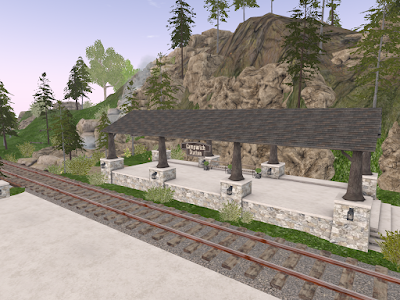 I seem to have gotten into tour mode starting at the holiday time, visiting all the Christmas places, then the bus tour. Right now I am checking out some of the  “faux “ business places you can find in the regions of the Bellisseria continent. Instead of making homes here some owners have created open places for all to visit. There is no commercialism in Bellisseria so that is why they are fake. 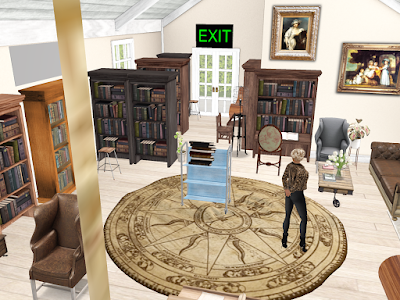 What a great public library Karmagrl Nesbith (Karmagrl Resident) has set up in a San Jocoso house . There is a large adult section with catalogs,  study areas, and comfortable seating. 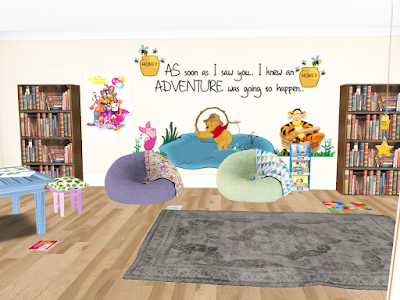 And on the upper floor a sweet little children’s section all set for reading and fun. Good place to sit when you need some quiet time. 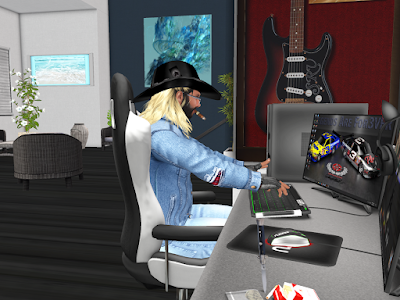 Johnny Chardin was at his Radio Station at his houseboat in Gaim when I arrived. It is a true radio station and also a hangout for any visitors. It is interactive so you can have try out being a DJ or producer while you are there or sit and have a cup of coffee and read a magazine and enjoy. Johnny says “Come by and see the works from some of the best creators in Second Life!Also: Everything in the HouseBoat comes fully animated! All vending machines work too! Make yourself at home :) My Stream is : http://streams.turbodj.com:8250 “ The stream is great. I installed it on my  houseboat.

I stopped over  at Twofer region where Morena Tully has a setup that will lend you a horse to take a ride around the region . This is one of the camping regions in Bellisseria where there is more open land for a horse ride. It is a good way to check out some of the camping areas the are on Bellisseria. 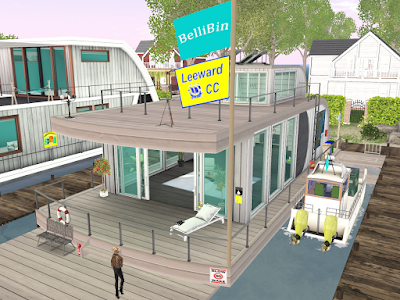 There is a role play going on in  Bellisseria. It is called Bellibin It is the idea of Diamond Marchant who is well known for various fishing aids for 7seas fishing. It is billed as, “BelliBin is a free waste management roleplaying game for citizens of Bellisseria in Second Life. You fill your BelliBin with trash, debris, and recycling. Other people find and empty your BelliBins using a HUD. “ the headquarters is located at the Diamond Outpost in Riva . The hud also works for travel around to various locations in Bellisseria to find bins but also where you can set down and look around.  There are great things happening on this new continent which is still growing!

I also went to check out the new location of the SS Galaxy and it looks great. It is still missing the soul but maybe more will start using it for weddings and parties.

If you would like a copy of a list of all the faux businesses you might like to visit in the regions of Bellisseria you can contact Iseult Ní Urquhart (PrudenceAnton Resident)  , or me. I have some other lists too that will help you get around , and a Bellibin map! 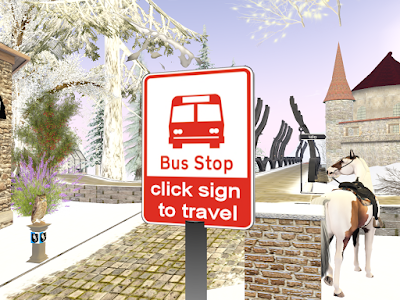 Have you ever gone on a mystery tour in real life? I never did. I have fun once in a while in sl when I have time and come across the sign that says, “Take the bus to the unknown.“  You will see them at some sites when you are shopping or visiting a region. All you have to do is click and you are off on an adventure. It can be sublime. or ridiculous. Just to give you an idea of the type of places you may land I decided to take a tour and write about a few of places I landed. 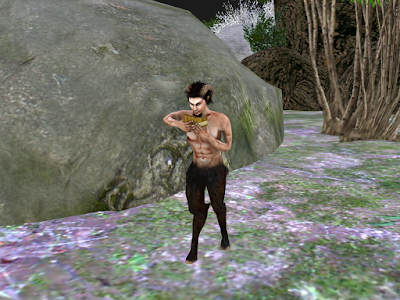 One trip took me to The Magical Forest of Dreams, a lovely forest where it was just fun to walk about and see what interesting sights I came across, animals, statuary. My next stop dropped me at the side of the road where there was, at present, “a work in progress” which was not too evident. 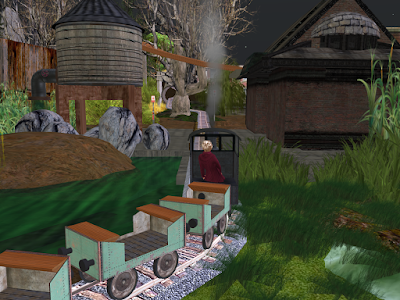 LABBIT LESOLT  R and R. I landed at the side of a cute little railroad where I took a ride to see the woods and surrounding area. I did not stay to visit all of the regions but it is billed as,”Beautiful beach to Chill and relax with friends. NO COMBAT, SEX OR weapons  PLS.We like to keep it relaxed.If you like to explore the 3 sims  then use the door near the gazebo. Have fun.” I plan to go back to see some more and check out those other regions. 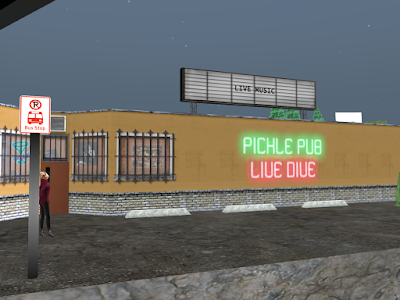 The next stop on my bus tour took me to The Pickle Pub Live Dive. It looks like an old fashioned gathering place for parties just off of the road. It has a bar, posters of show of the past , darts, and an awesome set of drums to play. The stop after that took me to a hot air balloon, two little boats all of which offered tours. 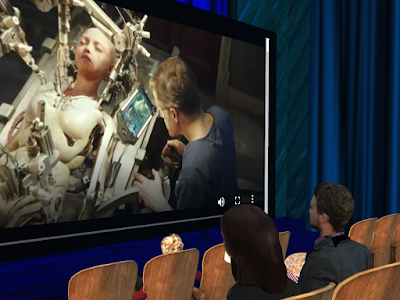 Then I landed at the Apollo Theater that shows free movies! I did stop there for a few minutes. “If it's happening anywhere, it's happening at the Apollo, and I wash my hands of the whole affair --A whimsical little retro theater.  Free access to XControl Menu. From the designer of Chilbo's Haunted House&Chapel, where horror never takes a day off.” That is the billing  and the movie that was playing confirmed it. They actually have a doorman who opens the door. 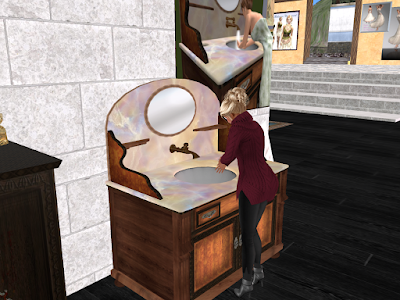 The bus stopped at The Bohemian Underground. a most impressive looking place that offers arts and music and fashion shows and more. I stopped here to freshen up  and wash my hands and face before moving on.There is also a very elegant clothing shop. Since it is wintertime in the north I thought you could start your own bus trip here at the Common Lands in Friedsee . See new places you never would have thought of going to and have a great time!