On Tuesday May 4, the University of Texas officially opened its Alamo exhibit in Second Life. The unveiling began with a Grand Opening event on the exhibit grounds, with live music and some dancing. Following that, the creator of the build, Lora Chadborne, offered tours. 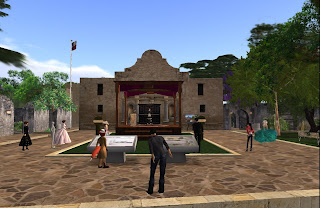 The exhibit was open at 2:30 PM SL time. Getting there, it took a little time for everything and everyone to rezz. And there was an unusual “bounce” effect on the avatars, feel sinking into the ground for a split second then being shoved hack up. Group chatter had a few reports of glitches elsewhere, so it seemed a few of the gremlins showed up at the opening event as well. At about 3 PM, a patio with a piano appeared in front of the Alamo. A musician, Brookston Holiday then sat down and began playing and singing. Most people just listened, but some were dancing.

At 4 PM, the music was over. And Brookston wished everyone well and left. But Lora Chadborne stepped by the entrance and offered tours of the Alamo. Lora was the woman whom had built the Alamo exhibit. She had recreated historical settings in Second Life before, notably the Mayflower and Plymouth and the Apollo 11 moon landing area.

Near the entrance was a sign that explained the shortage of pictures from inside the real Alamo: they were prohibited. But Lora told be she had no problem: the sign was there because the real-life Alamo had one. 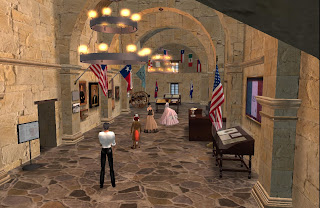 The inside had the same fine detail as the outside, or as Rocket Sellers put it, “this Alamo is unforgettable. Touching parts of the exhibit often gave you a notecard explaining the event. The baptistery and confessional near the entrance converted to powder magazines. The main room had photos of the real Alamo through history, portraits of Jim Bowie, Davy Crockett, and William Travis, a plaque of Travis’ last letter to Sam Houston, as well as a number of flags. Others included one with a flintlock on display, the Sacristy where the women and children hid during the final siege, which had a painting of Santa Anna ordering the bodies of the defenders burned in a mass funeral pyre.

In the back of the main hall was an 18 pounder cannon, the largest of those the Alamo had, a case with a newspaper account of the battle written 18 days later, and another comparing the fight to the Battle of Thermopylae of Ancient Greece. Nearby was the “Pop Culture” corner, with a movie poster and a kid’s toy Alamo set, “from the Davy Crockett craze of the 1950s.”

Nearby, Lora showed a recreation of the Alamo's well. In a nearby building, there was an art gallery, including photographic pictures of the actors playing the roles of David Crockett, Jim Bowie, and others. The building also had a gift shop. Lora gave me a coonskin cap for free as a souvenir. 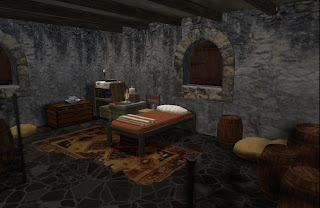 A notecard gave this brief history of the “Mission San Antonio de Valero: Erected in 1718 by Franciscan missionaries bringing the Christian faith to Tejas (Texas), this mission served for decades before being abandoned and secularized. In 1803, the decaying site was used as barracks by the Spanish army, who renamed it 'the Alamo' after the Spanish word for 'cottonwood tree.' When the merciless Santa Anna discarded the Mexican Constitution of 1824 and became a dictator, American (and Mexican) settlers in Texas rebelled. Those of the nearby town of San Antonio de Bexar moved into the Alamo fortress, where they stood against the advancing army of Santa Anna -- outnumbered twenty to one.”

After 13 days, the 189 defenders, Texans and Mexicans opposed to Santa Anna, were overrun and all killed but the women and children, whom were let go.

More info on the Alamo exhibit can be found on it’s webpage: http://www.uta.edu/secondlife/alamo/