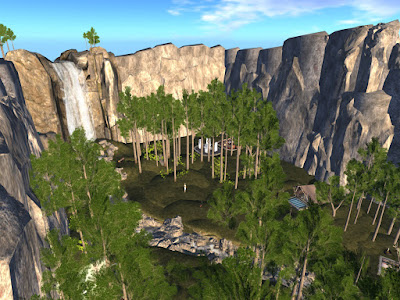 When Jadyn Firehawk sorted all the free items she set out for comfort in her popup store (story link), she realized that more than 200 members of the Yosemite Group had remained steady all this time since the regions were taken down last year. I guess this brought back so many wonderful memories of the old  Little Yosemite . 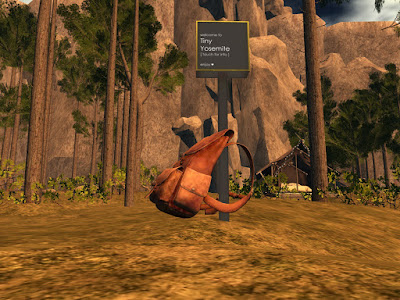 Nostalgia brought into being her latest endeavor and she sent out this notice, “Hi Everyone! I'm SOOOO excited to announce that Yosemite is back! It's a new and different incarnation ... It's Tiny Yosemite! You'll find that it captures the look and feel of the real Yosemite National Park. Come and see for yourself. It's the biggest little place in SL. See you in Yosemite!” 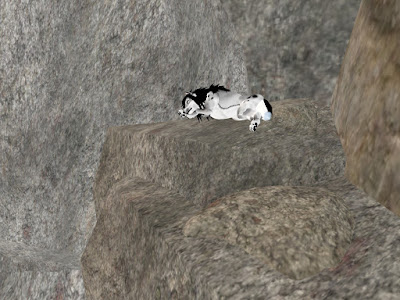 Fleegle Mumblewood was relaxing on a rock ledge by the beautiful falls when I arrived. As you come in look all around at the wonderful tall mountains and trees.The glistening falls bring rushing water over the rocks below that is so clear and lovely. Pick up the knapsack by the sign so you will have all the goodies you will need for a comfortable stay. 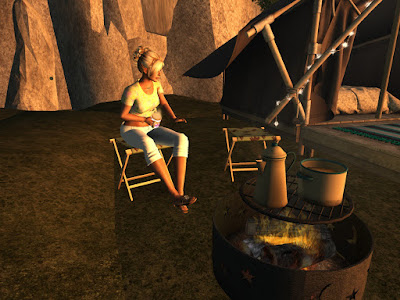 There are several camping sites for daily rental and they were all filled up at a very inexpensive price. I sat down by the fire at one of them and had a cup of coffee since it was available. 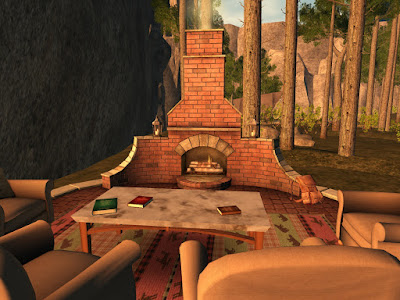 Jadyn has placed a lovely fireplace with comfy chairs and books by Muir on table . Near  by is a lovely dining area all set for a party. It is a great place to invite guests to join you at the table. 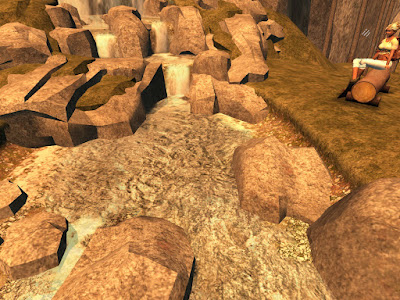 Behind the OWL Camp site you will find a rock climbing area that takes you up to the top of the mountains. Take a walk around the perimeter .. it is fun to look down over the whole site. It may be tiny but the memories and spirit  of the old Little Yosemite are there and it is a relaxing place to visit especially in this time of stress in the world. I know all the members of the group are thrilled and bringing friends to visit too. 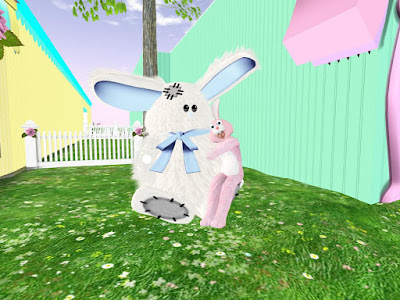 This Easter, Gemma Cleanslate went once again to a favorite place of hers this time of year: Laura Liberty's Easter Town in the Townies sim. 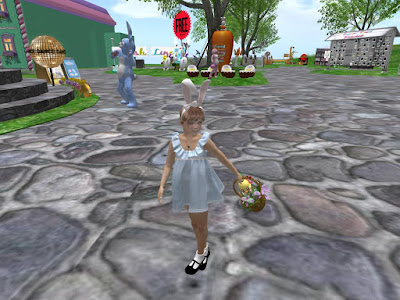 The place was mostly like what she saw last year when she did an article then. What was different was mostly the people, young and old. 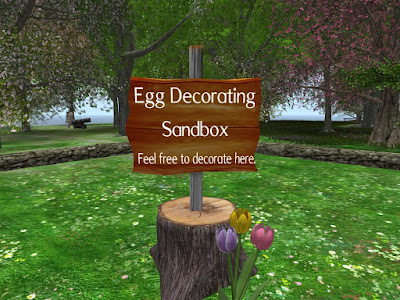 So instead of a whole new article, she sent a number of pictures. 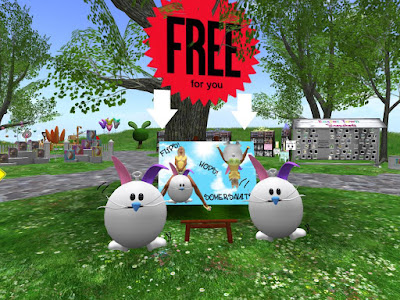 There were freebies available, such as bunny outfits and bouncy balls. 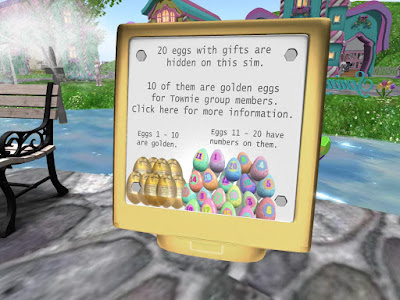 The place had it's own Easter egg hunt, with colored and golden eggs. 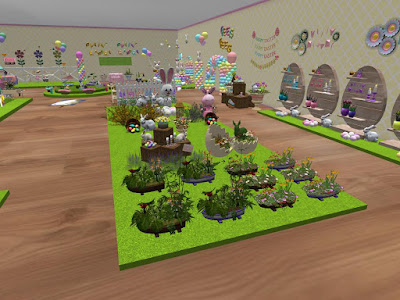 As before, there's much in the stores to buy. 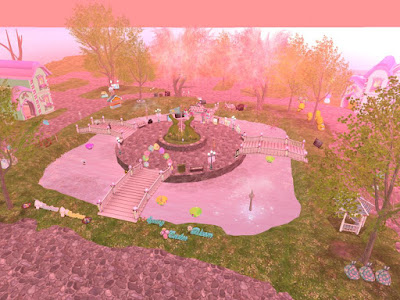 At dusk and dawn, the place can take a pretty shade of pink. 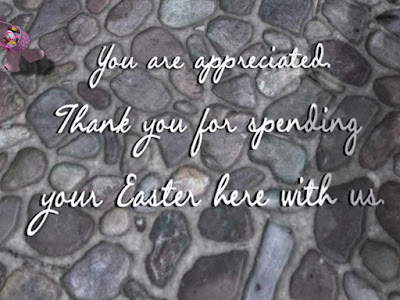 And Laura's appreciative of the visits people give.

Easter Town will likely be up for a few more days. Then the place will be closed until another holiday.

Posted by Bixyl Shuftan at 11:00 AM No comments:


What a day on the Bellisseria continent!  First of all ,I arrived at my houseboat just to change outfits and check all my notices . I really planned to leave after that to get to real-life work. However!! Immediately the Citizens chat erupted with exclamations!

“That Cloud is very dark”
“ snowing!! woohoo”
“THUNDERSTRUCK”
“there is rolling something over the street Oo
“TWISTER IS HERE!!!!!!”
““weather is so crazy I don't know what to wear >”


I stepped outside my houseboat and looked at the beautiful clouds drifting over and noticed the sound of wind.Sure enough those lovely clouds were spawning twisters. Weather has arrived on Bellisseria in all the regions. I quickly closed my sliding doors to the porch . 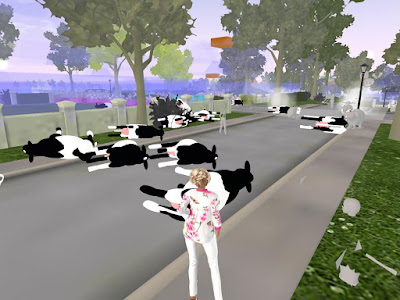 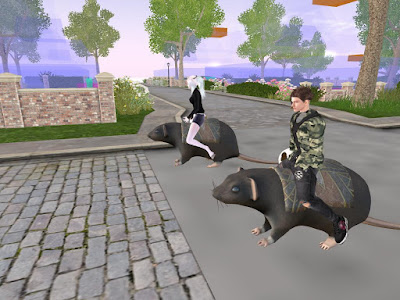 I flew over the the land regions to see how it was there. Sure enough weather changing constantly everywhere . And then.I saw a crowd gathering and  the usually busy quiet working Moles began to act up. They were riding giant rats down some streets causing chaos, throwing cows around, lighting people on fire. It turned into a riot. Suddenly they all disappeared one yelling out, “come find us.” 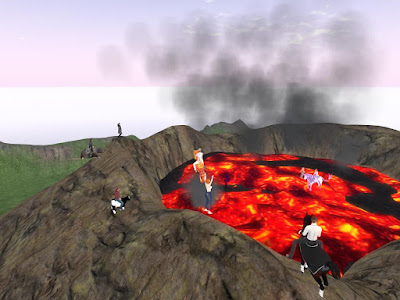 I did find them hanging around the base of a tall mountain in a region devoid of homes. As we stood there I saw that this is a volcano. This became the playground for the moles and more and more residents showed up to join in the fun. Lots of moles!  Adora, Alotta, Chronos, Sleepy, Frost, Lulabell, Moonstruck, Maximus , Ancient, and a new one to me, Glowing Mole all having a terrific April Fool's Day. Well, eruptions of volcanoes can be fun. I saw one brave protester, Rachel,  standing at the rim of the volcano holding a sign, looking for log homes. Avatars settled on the surface of the lava  when it was not erupting and the joviality went on for quite a long time. 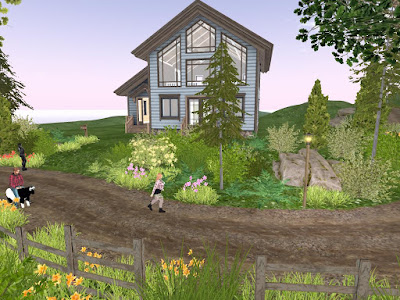 Suddenly the chat erupted again. Patch issued a message that finally the log cabins were ready for release. All those who had abandoned their homes and were waiting for release it was a near riot. Many of us followed Squeaky Mole over to the edge of a region with emptiness before us Then a new region appeared and we ran across it with her to the next region where we found the new Log homes in exquisite landscaping. It was a thrill to finally see them not as a demo but available in huge numbers to those waiting for them. I brought out my horse and took a ride on the dirt roads that wind through the regions . The are perfect for horse back riding. I took out my golf cart and it was good to take a spin not putting grooves in the manicured lawns of the Victorians. There is a great choice of homes to chose from.

It was a fun and exhausting day on April 1 on Bellisseria. Today the weather has calmed down and peace has returned .. until next time.