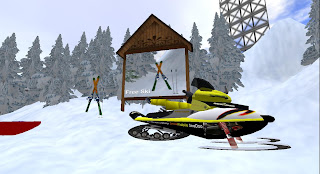 It has been such a busy season getting lovely Christmas items in the advent calendar and all the hunts I have been negligent finding the winter sports for you! But, winter is just beginning and there will be lots of time to participate. You already have a list of slurls to visit for skating.

How about skiing? There are some great places where you can go skiing, sledding, skateboarding and the sports gear is provided for you. One of my very favorites is at Wolf Mountain. That is on the skating list but you walk over to the tram and take it to the top of the mountain and there you will find everything you need. A spectacular view and a wonderful ski run. You can bring your own and not use the pose balls to flash down the mountain. http://slurl.com/secondlife/Wolf%20Creek/248/44/35. You will love it! You can warm up in the Lodge after your last downhill trek. 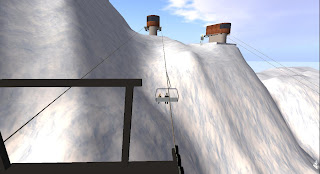 Now, if you love cross country skiing, one of my other favorites is the place to go. Aero Pines has 8 sims open for you with skis, poles, and auto cross country poses all set up! http://slurl.com/secondlife/Equus/18/180/22. That makes it easy to view the sims too. There is so much to do in both these sims. We have been going to both places for 4 years now.

Another place we have frequented for a couple of years is Chamonix City where you will find so many winter activities to either participate in or watch.They have a terrific ski jump! If you want to learn to play hockey this is the place to go. Freebies and information are available at http://slurl.com/secondlife/Cross%20Check/146/99/62. 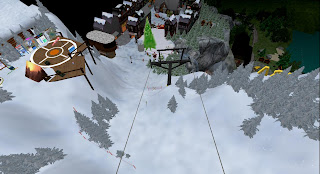 In Wengen there are great ski runs off the ONSR Railway, one of the private rails off of the SL Railway. . There is a ski lift right across the tracks from the station. This will take you on a memorable ride up the mountain to the runs. Enjoy the view! http://slurl.com/secondlife/Wengen/71/204/92 .

One more for you to take a look at is the French Ski Resort in Jura .It has a nice steep downhill and for a change, try the Snowmobile ! Wow! http://slurl.com/secondlife/Jura/238/96/116. That is a good start for skiing.

I will be looking for more fun places for you and I know they are there!

I'm in the mood for something out of the ordinary, something historically captured and exceptional in detail.

My selection is made in Second Life’s destination guide. I arrive in a unique architecturally designed island with steampunk, fairy, antique and Roman influences. It is whimsical and stunning as the guide states. The textures are elegant and its main store is called The Curious Prim. 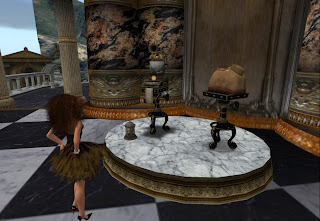 Walking up to the first exhibit on a marble floored display is Uncle Irvin Chatbot. The 41 prim stationary bot is so clever in his appearance. Grey Kurka needs to be recognized for his steampunk creativity. Uncle Irvin 's brain is encased in a covered tank floating in water, electrical-like pulses generating. His blinking eyes on each side of the square tank appear to look right at you. His body is formed from a steampunk typewriter with scrolled paper. It appears an adjustment knob is on the side of his propped up body. His legs are a three-legged tripod with wood grain. To the right is an old canvas bag and matching fedora. Nothing less than enchanting.

Off to the next exhibit I find "The Night Palace," a 230 prim, copy-modify build. You can teleport to the building to explore its multi-use structure. Grey's notecard informs me that it can be used as a residence, store or exhibition space. Its footprint is 50x50. All unique textures and sculpties are used throughout. It can be used for a role-play environment or an attention getter. Across from it is a Luxury Store which is designed as an elegant space to be used as a store or exhibition hall. It includes ceiling lights, urns with acanthus plants and a sculpty Venus statue. Only 138 prims with a 40x40 footprint. Front and center is a magnificent reproduction, the image of elegance, perfect for a musical recital. The white Harpsichord Princess has a French look to it. It is exhibited with a smaller model. Propped up in the center, you'll find the sheet music. Casting light to read the sheet music is a tall candelabrum. Love it. 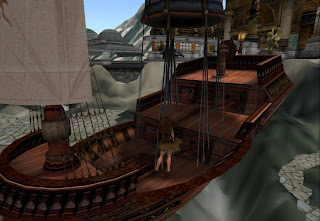 I could not resist the lure of an air ship close by. A short flight and I touched down on its deck to cast my gaze across the sim.

Returning a day later I found more wonderful creations. A Green upholstered Regency couch and chair set, a dark wood gothic table with lighter wood top and benches, an ornate gilt mirror and portraits, a leather covered trunk. Everything is rich in textures, unique and beautiful. The content creator deserves an award in creativity.

I had to touch base with this man who has somehow reached into my dreams and created the fantasy world I desire. Grey Kurka is The Curious Prim's creator. The first incarnation of his store was at a charming corner lot in the Rue Dantibes shopping district. It was nestled next to Barnesworth Anubis and Cory Edo, two talented early Second Life creators. The store opened early in 2008 and after a year or two it was expanded to a larger parcel in the Otherland Continent which is now gone. 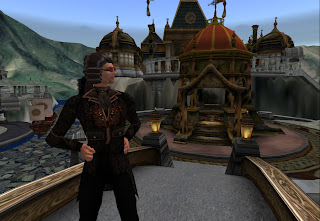 "I settled here in Mythopoeia in July of 2010, so all told I have been in business with the Curious Prim for nearly four years. I also started using the SL Marketplace from the beginning and that has been a great help," he told me.

Kurka didn't choose to work on any specific genre. He merely let his inspiration and sense of whimsy be his guide. His love of fantasy illustration led to his creation of "Fairypunk."

"That term sums up my love of fantasy and Techno-Baroque funk," Kurka explains. "Because Second Life tends to be composed of different role play communities it is easier for them to identify work that fits an intended environment. However as a designer, I feel free to let my imagination roam at will."

Kurka's ideas are generated from real life objects. He tries to avoid looking at how other 3D artists have solved a certain design question and prefers to study as many actual artifacts as possible. Then he lets his imagination and ability with technology work to their best advantage.

“My Manor House, for example, was inspired by a boathouse designed by an architect named Julia Morgan, but it was greatly modified,” he explained. “Most of my stuff has some antecedent in real life to give it a context, but is then made personal through reinterpretation.”

In terms of how long does it take from prim to texture to fine tuning, Kurka said that if his drawings are sound, and he has gathered decent reference photos, the actual construction phase moves along fairly quickly. For example, a chair takes two three hour sessions. He’ll make three prototypes for every final.

“However, the research, design, and animation creation can easily take three times as long, not to mention scripting and all the preparation for sales in world and on the web,” he mentioned. “So, from idea to actual display, a week or more.”

Kurka does not enter contests. He finds it’s a difficult fit for designers that create for commercial venues. He said the designers that role-play as fine artists in Second Life tend to have a culture of “monastic abstinence when it comes to selling their work, perhaps perceiving that it compromises the purity of intention.” However, real life galleries work on the assumption that the artist expects remuneration, and the average income of any designer in Second Life is basically on a token level as far real economies are concerned.

“To be fair, we are all illustrators in here, creating visual equivalents for our own fantasies and dreams,” he said. “When I first started working in Second Life, I used to visit a sim called Dreams. They have speed-builds and building contests. I had a lot of fun working with a talented group of creators and teachers, a great way to learn. I would suggest everybody should visit and get creating or just support their wonderful efforts.”

What does he find most rewarding?

“For me the true reward of finishing a new design is knowing that it enhances the immersive experience for someone and adds some visual interest into their play. It is the use of an object in a role that completes the intention and gives context to the work.”

Asked what he would love to create, he replied that he would like to see a feature where the hand of the artist could be used directly in Second Life. Having a simple set of "paint" tools, a brush, pencil, paintbucket, etc. would bring the studio into the grid in real time. Surface textures could be added to objects or artists could work directly creating 2D work on a virtual easel.

“For me the experience of doing a landscape painting from within Second Life would be so much fun.”

Netera Landar
Posted by Bixyl Shuftan at 6:00 AM No comments:

Yes, it is the winter sport season. Second Life has many wonderful places to participate in more than one sport. My favorite has always been ice skating. Skiing is fun too, and sledding.

I took a tour of the quite a few sims that already have skating ponds and rinks set up for you. At most you will find free skates, male, female and unisex available. At some you will also find some couples skating poses, and also snowball throwing prims to pick up. I sat on a reindeer at one.

Some of these slurls will take you directly to the skating area, but there are a few that you will have to search around a bit. That is ok too since the sims have other interesting things going on besides skating.

I will have some more for you as we get further into the season. It will be a long winter in Second Life so take advantage of it, (with apologies to our Aussie friends). I will also keep an eye out for some cheap vacations to tropical islands.

Snow falls Island- have to tp from entrance, look on the board
http://slurl.com/secondlife/Requiem/40/139/22

Have a great time! See you somewhere!