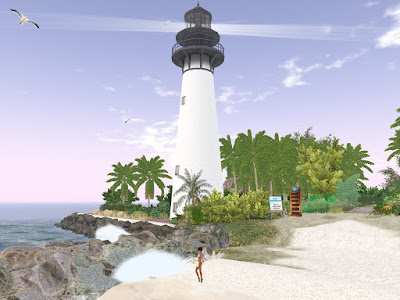 After all my winter visits to snowy cold places, I needed a short vacation in Second Life in a warm site. I was lucky enough to find a perfect region. This sim is the replica of a place I would enjoy seeing in real life right about now, Cape Florida State Park. In real life it offers all the enjoyment of beach and tropical foliage with boardwalks and trails to traverse. 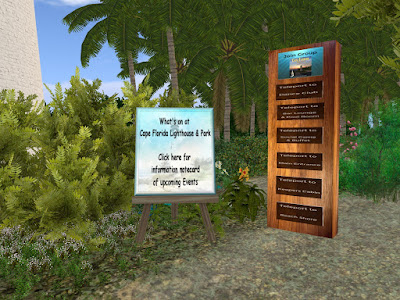 As soon as I landed at the SL Cape Florida I felt the lushness of the region. The beautiful vibrant flowers and palms everywhere relaxed me immediately. Right at the entrance, there is a teleport column giving you venues to visit. Since the famed Lighthouse was right there I climbed the spiral stairs to the top to get a view of the whole region. 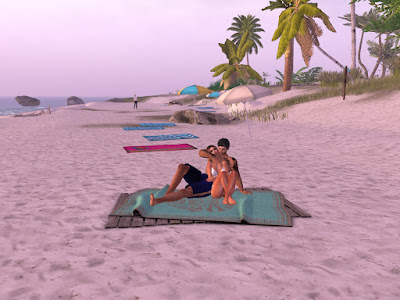 Then I decided to visit the nearby beach where there are mats and towels . There were several people enjoying the sand and water. I found a nice shower to get off all the salt before I went to explore more. I stopped at an ice cream truck for a sweet treat. As I walked back into the palms along the boardwalk I saw several gazebos, pergolas , picnic areas with food on the table and dance balls for  couples  to visit , dance and talk. 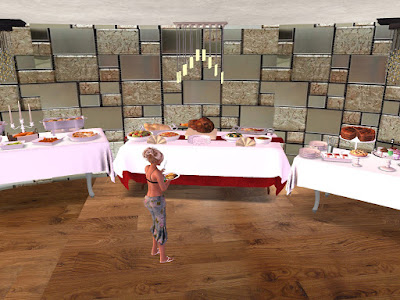 I arrived at the impressive Club House. The ground floor has a welcome desk with a group inviter, a small lounge area and a shop, Apotheosis. I sat on a couch which was over a glass aquarium with numerous species of fish to observe.  Then I climbed the stairs where I found several areas: a bar , a lounge with an enormous TV and a great pool table ,and, in the final room a lavish buffet . I definitely stopped there to check out the food. In spite of the ice cream I was hungry after the time at the beach. Huge choice! 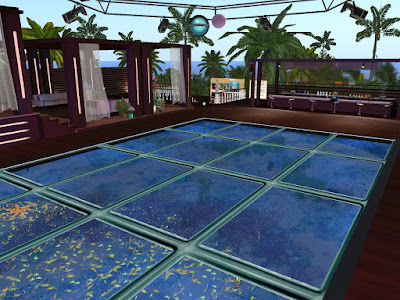 The next floor had another bar and a club atmosphere where events are often held according to the board. This floor has a large glassed floor with another aquarium below.The shows here include live singers, djs, tribute acts and more to come. I know they are looking for more acts and hosts. You can contact Chloe (ChloeElizabethGrace Resident), or Jackstir Resident, co-managers of the Club.

I asked the owner Teren Silverheart (Terenglen Resident), who is a Floridian, how long he had this region. “ this sim has been here since around September of last year. Previously I had a full sim I leased but  found it too restrictive and it did not allow me to have the landscaping I wanted. We allow people to rez here within reason if they are a group member and we hold concerts on the beach. The whole point of this is to have created a place that others can enjoy . “  Set aside a day to take a trip to this enjoyable site. 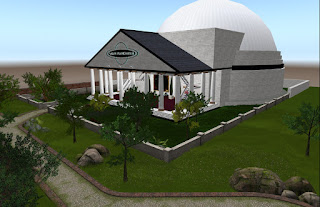 Probably the best known astronomy-themed place in Second Life is the International Space Museum. But there are others. One notable place to learn a little more about the planets and stars is the Sagan Planetarium, high above the Aspen sim. The location is named for Carl Sagan, a 20th Century astronomer and author best known for co-writing and narrating the 1980 TV series "Cosmos."

The first room people see is the gift shop. One can grab one of a few t-shirts, a model Hubble Telescope or V-2 rocket, or a small or large orrey (a mechanical model of the Solar System). There's also a donation meter one can chip into to help keep the place going. Upstairs is where things start to get more interesting. There are models of three historical craft, Germany's V-2 rocket, the first man-made object to technically make it into space, Russia's Sputnik, the first artificial satellite, and the Hubble Telescope from the United States. Under each is a panel with some information about the historic objects. 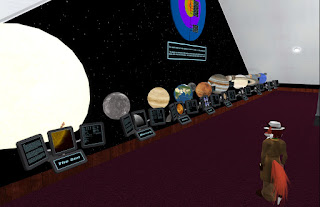 Also on the second floor is a display of the sun and the eight planets, from Mercury to Neptune, and some of their moons. Each has panels of information in front of them. Clicking on one of the planets, one sees a cross-section. Each of the planets is unique in some way from Venus' runaway greenhouse effect to Saturn's large rings to Uranus' odd axial tilt.

There's also a panel explaining how the definition of a planet has changed. For thousands of years, humanity has known five planets other than Earth. Then with better telescopes, two more were discovered. For decades after it's discovery, Pluto was considered a ninth planet. But with the discovery of a larger body beyond it's orbit, astronomers met to agree on an official definition, and Pluto was "demoted" to being one of several "dwarf planets." This was not a definition everyone agreed with, and some still consider Pluto a planet. 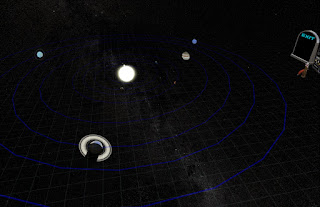 The main room of the planetarium shows a model of the solar system, the planets orbiting the Sun. It's not quite to scale so the worlds can be more easily seen. One can also get the room to change from the model and play one of three shows, "Tour of the Planets," "Apollo on the Moon," and "The Moons of the Solar System."

Outside the planetarium, is a small park area. The main feature is a huge outdoor orrey that shows not only the eight planets, but also the dwarf planets Ceres and Pluto and many of the planets' moons. The planetarium is not the only place on this large platform above the sim. Beside the park area it sits in, there's a laser tag arena.

For space fans, a place worth visiting. 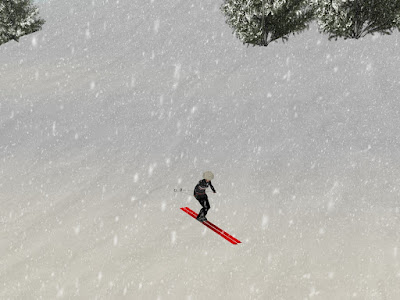 Now that things have settled down after the rush of the holidays and Christmas markets and sims have closed for another year I still have my skates and skies and winter outfits out . I went looking for regions that are still with falling snow and frozen ponds and lakes to use. There are some really nice ones to explore and experience the beauty of winter. 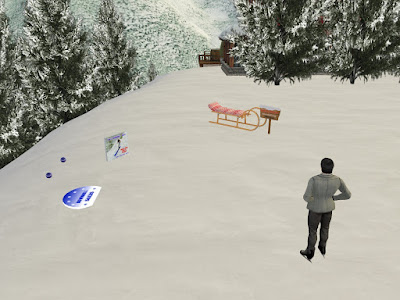 A visit to the Crystal ski resort in the Alps has opportunities for great skiing. I  loved the ski lift that allows an overview of the snow covered sim . At the top there are free skis  and ski balls if you need them. I brought my own but tried the downhill run on the ski ball to take my time and not fall off the mountain. If you prefer, rezz a comfy sled for the run. It is a  nice soft cushioned sled to hang onto. The owner, Rick (Reece Maloney), assured me that it is always winter in the Alps here so skiing is available all the time. 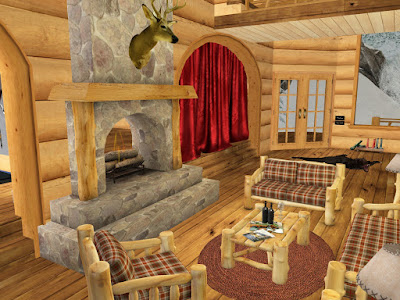 Everywhere there are little corners to relax and share a hot chocolate  or something stronger. By the lovely waterfall there are dance balls for friends or lovers. The lodge is welcoming with a fire to warm you after your skiing. Or drop into the Loft Cinema and enjoy a video of your choice from the lengthy list on the screen. 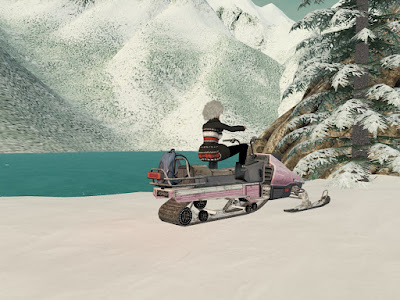 I am  not too competent on a ski mobile but did pretty well on  the one I rezzed there . Try it. All in all this region offers lots of fun activities and one can rent a lodge and stay for a few days if you like. There is a shop with some really fancy ski outfits for both male and female. I met the designer,  Almut Brunswick, wandering around in one of her suits! I always take my horse for a ride in the snow too. Have fun. 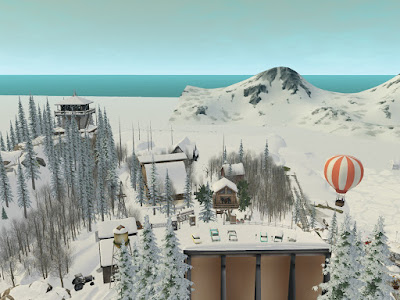 My next trip took me into Zimminyville.  This is another lovely winter sim with roads to roam and an extensive lake for ice skating. The first thing I did there was to hop into the hot air balloon that does a narrated tour of the region from  above and points out the various hot spots not to miss when back on the ground.

There are rentals here also but loads of public places to visit and enjoy. The owner, Curfax Zimminy, told me it would stay in winter garb until about April. I took my horse for a ride on the snowy roads to view the buildings . 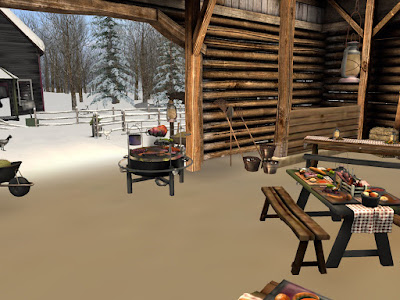 Stop in at the barn by the side of the road . It looks like someone is getting ready to host a great picnic. 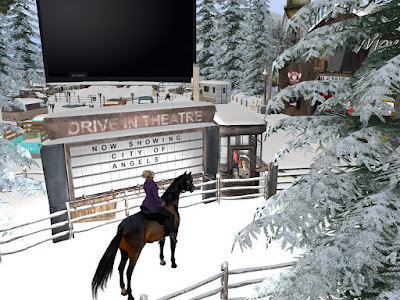 I stopped into the drive in  movie theater which is showing "City of Angels" and picked up some popcorn at the refreshment stand. Perhaps when the movie is over they go to the barn for eats. There are many opportunities for photos all around this region. The railroad area is amazing. The hike up to the Ranger Station is a long one but the well worth it. A lovely view overlooking the sim awaits you at the top. 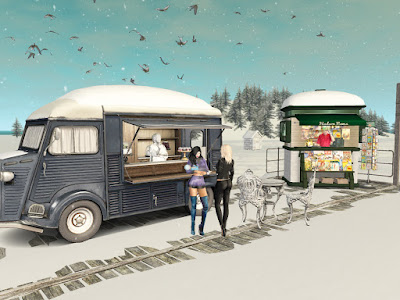 I think I will definitely revisit in spring when the sim comes into bloom.