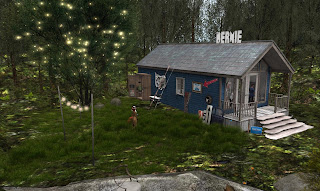 Besides the Bernie Sanders Headquarters in Caspoli, recently a new location for the candadate for the US Presidency has sprung up. Finding out about the location when my viewer's built-in Destination Guide brought up the place, I decided to check it out, and headed over. Instead of a shiny new building like the Trump HQ, or the classic Greco-Roman Forum look of the Sanders HQ, the place was a seasoned-looking wooden building that looked much like a house in the countryside that had been converted into a hangout. There was an old-looking wood cabinet with it's door wide open, as well as signs propped up and leading against the side. And of course were the "Bernie for President" campaign signs next to the porch, and the letters "B E R N I E" on top of the roof. 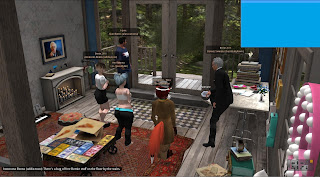 Getting closer, I was spotted, "We have paparazzi outside!" I chuckled and greeted them. A woman named Addie Tozz invited me in, "You can come inside and take your picture with Bernie, well, with a younger version of Bernie." She giggled and pointed to an avatar named "Bernie Sanders (Bernbabybern)," which bore a strong resemblance to the candidate, minus the wrinkles, having the familiar spectacles and unkept grayish-white hair. Addie also pointed out, "There's a bag of free Bernie stuff on the floor by the stairs." Looking around, there was a bit of clutter, with a "peace sign" light plugged into a wall outlet, pizza boxes on a table full of papers, lots of Sanders-themed pictures on the wall, and American flag hung behind a couch, and more.

When asked, Addie stated she was the one who built the place, "I volunteer for Bernie by canvassing and phone banking RL. I thought we needed something like this in here, maybe I could raise some money in donations to give to Bernie." And she had raised some, "About 5k total. Others have donated tier, their time, or even money to make the Bernie avatar." When asked how many people were involved, she did say it was, "mostly just myself and my friend Billy. Billy made Bernie and helped with the trees and landscape outside. ... I got the land April 2nd. It's still not completed in my opinion because I keep thinking of new things to add. Like we just added Bernie, so you can take your selfie with (him)." 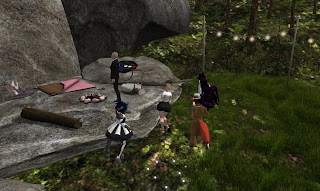 With a number of people inside the small building, it was decided to move the conversation outside. There, a "Greedy" game was set into some rock, which also had logs and smaller rocks to sit on, and a plate of smores. I asked how many were in the group for the location. "We just broke 60," Addie told me, "We have 62.  We average about 100 new visitors a day since we were put on the spotlight editor's pick." One of the visitors there stated she had found the place in the Destination Guide. 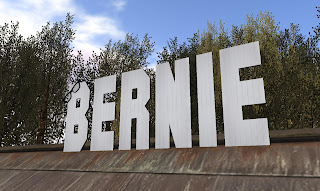 I asked if there were any events planned, "We would like to plan some events. We were discussing that earlier, ideas for events. We also are planning on making a video, possibly (laughter). ... we had a music dancer made for the song 'Disco Inferno' and we want to make a video of everyone dancing to it. Wait one sec and I will show you." She passed something around, "Everyone attach that. ... Okay ready?" Then the group started dancing to the song, "Burnin' burnin.' " Addie brought up, " don't know if you've seen it, but there's been flash mobs of Bernie supporters dancing to this song. That was the idea for the video." She hinted that a flash mob outside the Trump HQ as a kind of payback for the Trump Wall outside the Bernie HQ was not out of the question.

Of the future of the location, "I've thought about looking into a live music event possibly." She hadn't talked to any musicians, though, "I volunteer in real life so this takes a bit of a back seat sometimes. ... I don't have any real plans, just going to see where it goes. This is my personal land, I live here as well. So as long as people come and enjoy it, I will keep it going."

It was about then that Addie and I parted ways. Since then the "Berners" and supporters of Clinton have continued to be at odds. While the majority of pundits consider Sanders' chances of getting the nomination are remote, the night before this article was published he won the West Virginia primary by a landslide. A sign that "Feel the Bern" will be active for a while