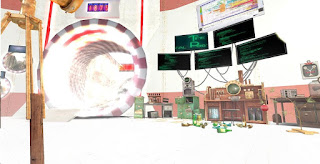 Frau Jo Yardley, creator of the famous Berlin Project has a new location for lovers of time travel. I visited the hub and was thrilled to experience several of her new sites that are completed and open to the public. There are more to come and under construction. France is next I believe.  The name of the ‘hub’ is “Time Portal Community for time travelers and virtual history”. Landing there for the first time is a an experience in itself. There are three spinning portals now to walk through in this scientific looking center. Three more portals have a sign saying Opening soon. 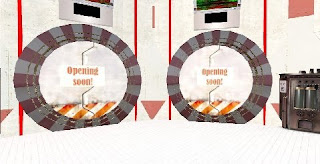 Also on the wall there are some tiny spinning portals that will take you to destinations off site to other historical builds owned by other creators. It makes it so convenient while on exploration of the grid to just click and go. The era portrayed in these sims is also indicated in case you want to go looking like a citizen of that time and perhaps find a new role play community. On another wall is the Information board so you can keep in touch with information about the Portals and events. This region is right next to Berlin so you may wonder over there from one of the streets. 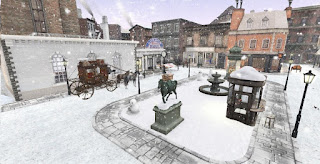 My first trip was through the portal of the Victorian era where I stepped into the years around 1890‘s. I went through the seedy part of town to the town square.  I found horses and carriages along the streets outside the shops as I wandered along peering into the buildings . I stopped into a shop called “The Curious Seamstress" featuring clothing of the period for ladies of fashion and farther down the street I found a gentlemens shop. I stopped in at the London Hall where I found a magic lantern show set up and waiting for customers. This area is certainly a delightful reminder of historical setting the stories of Marley and Scrooge, whose shop I passed. 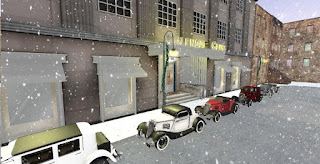 Walking through the next portal I entered the years of the 20-30‘s 40‘s. Here along the street I found elegant autos lined up in front of “The Calendar Club”. Numerous shows were advertised on posters in the windows and on the walls of buildings. The change of the style of the art deco buildings and furnishings showed how much  modernization had taken place between these years and the Victorian age. Shops with vintage clothing for this era. In one shop I found furniture and decor from the 1920s and next to that a vintage hat shop with stylish cloches for sale. I came across “The Curious Seamstress” again but up to date fashions in this shop.I almost bought an antique auto but controlled myself! I stopped in at the old well known Delmonico’s Restaurant known here a Clarrington’s Delmonico, bar, restaurant and shopping. Across the street I found some great gotchas. Just stepping into all the buildings is a study of history . 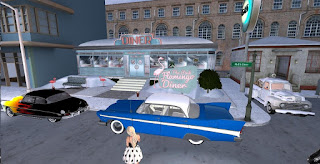 Stepping into the next portal was more familiar since many remnants of the 50-60‘s still remain as part of the environment to this day in many cities.The Pink Flamingo Diner in its pastel colors ,with long cabriolets in front, is the first building your eyes are drawn to . Another eye catching build is the Cinema with posters of Jimmy Dean on the front. Again I was so tempted to buy the era car. I did stop at the pizza shop! How interesting to see the changes in the offerings of food and vendors over the decades from the Victorian era. 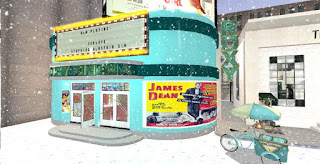 There is much to see and experience in these three open portals. I would take a look now so you will be ready to visit the portals under construction when they open. It is a fun region to visit and offers opportunities for getting a look at sims off site too. I used to enjoy visiting the ports of call from the ship Galaxy. This is a similar opportunity I hope you like!  So far I have taken an out trip to Rocco Sorrentina 1784 Italy, in the baby portals on the wall. There are five more! My next trip is to Ancient Rome.   Here is your entrance.

Commentary: Three Sims That Deserve Being Brought Back


As the ashes of yet another year crumble to dust, we can take a moment to reflect on everything that has passed us by and derive both wisdom and pleasure from the last 365 days. This is a tradition of mine, where I will sit down in a comfy chair with a little wine and a little music and look back in an attempt to derive a useful maxim for the future based upon these fading experiences. After giving it some thought and not a little consideration, I offer my maxim for 2016:
Let us not do that again. 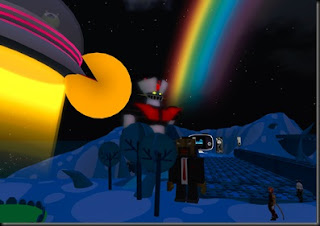 Now with that particular hurdle out of the way, we can take stock of all the possibilities that the New Year ahead might bring- and as far as Second Life is included, that means the possibility of seeing some flashes from the past.
Now, of course, at this time we don't know if there is much momentum behind the preservation and restoration of historical sims, but surely most of you can name at least one location of your past that you would like to see returned to its former primmy glory. Therefore, to salute the beginning of a new year, I would like to propose my top three picks for my wish list:

Linden light, linden bright
First Linden that rezzed tonight
I wish I may, I wish I might
Relive this sim I envision tonight... 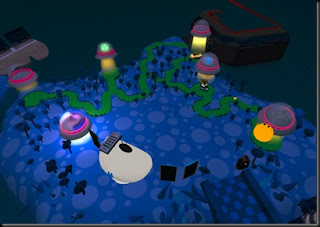 This stunning sim was around in 2010, and setting foot on its shores was like getting a technicolor pie to the face, thrown by the Cheshire Cat.
I admit I never really knew much about this enchanting place, making it one of my go-to places to relax and visit the 1980s- for surely this was where the decade retired. Wherever you looked you would find evidence of your childhood (if you grew up in the 80s, that is) bridges made of legos, the towering shapes of Mazinger Z and Pacman staring at you, Atari monitors, giant synthesizer keyboards (alas, no keytars) and the ever-present palette of the era raging between neon brights and the cobalt/cerulean combination that was ubiquitous during the era.
After the passing of a year that seemed obsessed with taking away a large chunk of icons from the ‘80s, maybe we could get some of it back in digital format.
2.- 109 Prim Circus 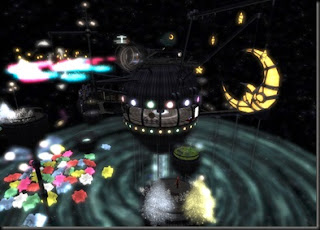 Perhaps one of the most beautiful places in Second Life when it was around, this sidereal carousel rewarded visitors with a cosmic vista the likes of which one was likely to see in dreams only.
While it had merchandise for sale, it was tastefully presented in such a way as to not shatter the atmosphere of the delicate plateau suspended in the inky, starry void.
The main attraction consisted of a chariot ride that was exquisitely planned through a literal ‘field’ of stars and constellation dolphins. Finally, if you needed a break from the phosphrescent spectacle, you could stroll and dance on stardust with your partner.
1.- DePaul University 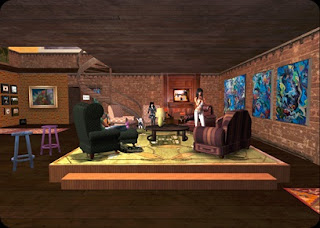 Roughly seven years ago, you could throw a stone and have a fifty percent change of hitting a university sim in Second Life. A large number of institutions great and small felt their interests piqued over our little virtual experiment and decided to run their own experiments: extending their curriculum online.
One of the more adventurous sims belonged to DePaul University’s School of Computing and Digital Media. Managed by second life denized Andres Kleene, whose secret identity was that of a professor of Game Development for te University, the sim giddily embraced most of the Second Life culture. Professor Kleene saw an explosion in the number of tinies visiting the sim, and he obligingly made them a whole village on the west side of the sim’s mountain. The Silly Goose and the Cup Of Goodness were intricately-detailed gathering spots where one could often find students or other curious visitors with whom to converse.
Professor Kleene was very interested in the possibilities of Second Life as an educational tool, but he was also very conscious of the obstacles such places faced. In a conversation back in 2010, he said to me:
“The real stumbling block is the learning curve (...) A professor in English literature studies doesn't think twice about posting a lecture on the web or giving web references, that's because he/she knows that those are accepted technologies: people are comfortable with that. Until 3D worlds are as natural to people as opening a PowerPoint presentation, we won't have the liberty to really explore this tool. We're still trailblazers, I'm afraid.”
Back in 2010, Professor Kleene felt that the dean of the college was fully behind the university’s experiment and felt no pressure from funding. Sadly, the experiment came to an end, and all that is left of the University’s sim is this user’s flythrough ( https://www.youtube.com/watch?v=s2upjzcCrrA ), which does a good job of recording the cozy and charming atmosphere cultivated by its builder.
<iframe width="560" height="315" src="https://www.youtube.com/embed/s2upjzcCrrA" frameborder="0" allowfullscreen></iframe>
Of course, of the sims in my list, it is unlikely that the Lindens might resurrect this one- after all, it was created and belonged to an existing institution... but for its sheer atmosphere, hospitality, and spirit of experimentation, the DePaul sim will always be number one on my list.
Kain Scalia
Posted by Bixyl Shuftan at 6:00 AM No comments: