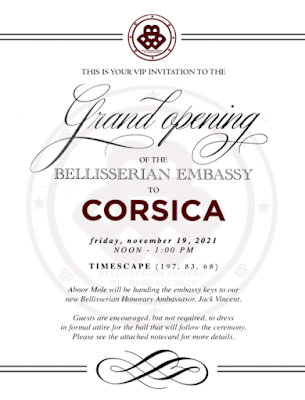 The long awaited Bellisserian Embassies are starting to open. The first one is located on the Trendone Road in Timescape on the continent of Corsica . Many gathered for the formal opening.

BÓÒ (Boo Rojyo) of the Bellisserian Bureau of Bureaucracy  acted as the Master of Cremony and greeted everyone present. He introduced Abnor Mole who spoke about the continent of Corsica and the hopes for all becoming more connected to each other and the Bellisserians. “"Your world. Your imagination." is a dream and a spirit that has always been shared within the Second Life community.” 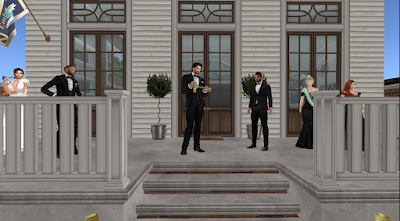 Abnor Mole handed the key to Jack Vincent, the first Ambassador ,on Friday the 19th of November and many witnessed .He gave his acceptance speech.

ᴊᴀᴄᴋ ᴠɪɴᴄᴇɴᴛ: "I'd like to take this opportunity to thank Abnor Mole for taking time out of his busy schedule to present me with this key.

"Thank you all for joining us to celebrate this important first step in that endeavor.

And we did with dancing in the Embassy. 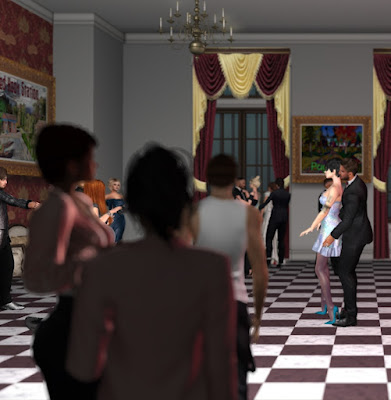 The Embassy  is located on the Trendone Road in Timescape on the continent of Corsica so passersby will see it and perhaps stop in. The neighborhood has a rezz zone nearby .

I spoke with the new ambassador who says he has some wonderful activities planned for the visitors .  Jack said “: I've working on possible travel HUDs and tours. I'd definitely like to do in person tours and if possible HUD tours. I'd also like to have music events and dances at the Embassy's event room. That is going to be a big even in January of 2022 for the 2nd anniversary of the BBB but things are still in development.”

I can’t wait to see what goes on. When you visit the office touch the pictures on the wall for information.  http://maps.secondlife.com/secondlife/Timescape/197/83/68 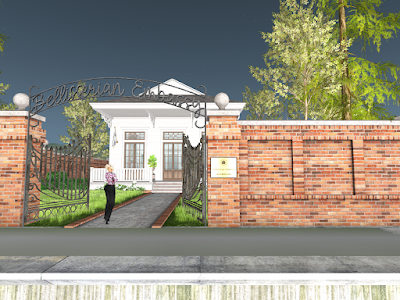 The next embassy that will open will be on the continent of Heterocera. The date is not set yet but I went to see it and visit with the appointed Ambassador. The building layout is similar and it is located on the railway in Tersa. All the Embassies will be similar so they are recognizable . 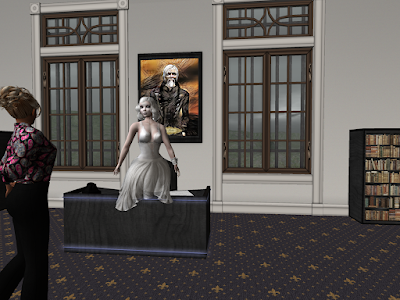 The Ghost (TheGhostOfGhost) will be Ambassador when she accepts the key soon. There will be a reception as at Corsica. We talked about the future in the Embassy office . Over her desk she has a portrait of Oz Linden who she hopes will guide her in her new position.

She has some ideas for her new position . All the future Ambassadors will be hosting events at their Embassies . The Bureau of Bureaucracies of Bellisseria in concert with the Lab  is sponsoring this whole activity across all the continents to create more connections with the residents of second life. 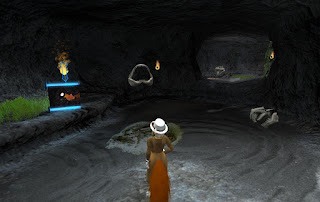 I recently heard about a Jurassic Park themed place here in Second Life. Probably most everyone in Second Life, at least among English speakers, has heard of the 1993 movie by Steven Spielberg in which a genetics company has accomplished the once impossible: bringing dinosaurs back from extinction. The owner decides to make a theme park on an island far from the mainland, and invites a group of people on a tour before the planned opening. But unfortunately, things go wrong, and the dinosaurs end up out of control and the people in danger from them. 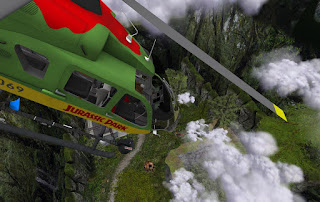 The SURL takes you to a cavern full of dinosaur bones, in which you're told you're a palentologist whom has just been invited to take a trip by helicopter to "see what your fossil findings have brought to life." You can pick up a flashlight and a backpack at a couple places. Leaving the caves, your next step is to click on the helicopter pad and hop on the helicopter. 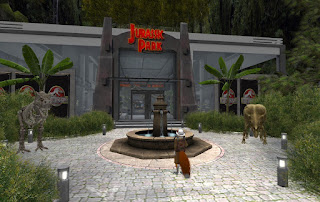 You go through some sky and clouds, and eventually land in front of what looks like a museum, with the sign Jurassic Park. Going inside, at first you see bones, but going further you see an incubator with eggs, and an animation showing a scientist getting DNA from a mosquito. 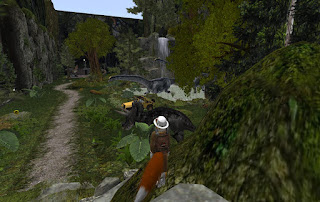 Going through the door, you hop on a car and go on a tour, seeing the live dinosaurs for the first time, "Welcome to Jurassic Park." But eventually, something goes wrong and the vehicles stop. You then have to continue on foot, glad the carnivores are safely in their cages ... or are they? 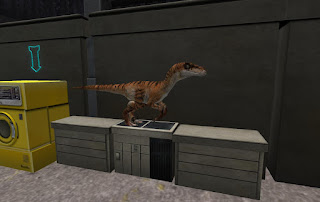 Those familiar with the movie (and novel) can guess what happens next. There are scenes of the fences holding the more dangerous dinos now down, and making your way through jungle to the buildings, which are now overrun with raptors. You'll be going through them, as well as some explosions, then wreckage as you make your way to safety. At one point, there's a T-Rex chase. 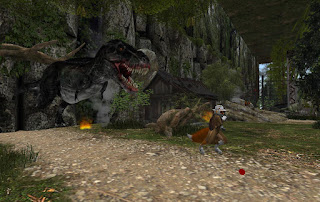 There are a few spots with some humor, such as the giant pile of poo in the triceratops area. And there are a few rides, such as the rideable pterodactyls. At the end of the experience is a small store in which you can pick up a souvenir, such as an Australian slouch hat.

A great place to explore, especially for fans of dinosaurs.

Posted by Bixyl Shuftan at 8:50 AM No comments: 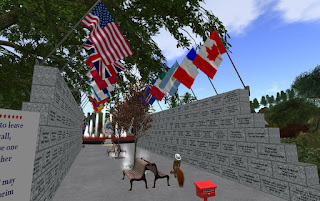 Besides Thanksgiving, November is also known for Veterans Day in the United States. And every November, a group of volunteers set up the Veterans Tribute in honor of American vets, as well as veterans from other countries. The location varries year to year, and in 2021 it's at the Rainbow Dream sim. This year marks the fifteenth the Tribute has been around in Second Life.

The tribute will be open from November 1st through November 15th! 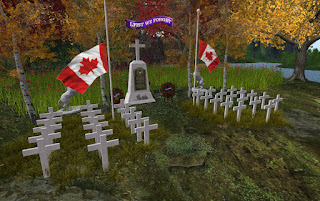 The Tribute itself is non-political and serves one purpose and one purpose only and that is to honor all the men and women that have given willing of their time to protect the lives we enjoy today.

The goal of the Tribute is to provide a non-political, content filled, educational, interactive SIM inside Second Life where men and women of all walks of life can visit and provide remembrance and honor to those who have served in the Armed Services.

The tribute operates on a zero dollar budget and is non-profit; the entire tribute is built, funded, organized and executed on a purely volunteer basis. We have an organized group on SL called the “SL Veteran’s Tribute” if you would like to look it up.  This group will be used as the basis of our planning and scheduling for the Tribute.

Getting a notecard from Wildroses Pevensey, it had the following:

We will be hosting events daily (its not to late if you are still interested in donating some of your time to entertain us) Or if you would just like to come by and see the wall or submit a name to the wall. We continue to ad names to the wall and watch it grow. It is for past present and currently serving military Veterans around the world. I would try to describe the sim but i just can't it is something you have to see for yourself! 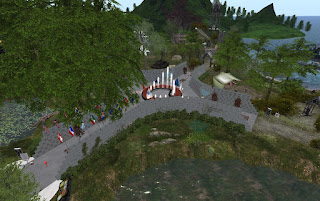 The SURL provided takes you to a small building that offers you a notecard explaining about the tribute. There's also a sign with some quick teleports to some of the different areas, such as the main stage. There's a sign next to the building showing what events are going on that day, or what went on the last day there were events. Walking straight ahead is the Tomb of the Unknown Soldier.

Straight ahead from there is the Memorial Wall in the center of the sim, sometimes just called "The Wall." I found a couple whom are known to history, WW1 aces Billy Bishop of Canada and Manfred von Ricthofen of Germany (the only German I saw on the memorial). Most are known only to friends and family, a mix of deceased veterans and some still alive, both retired and still serving. These are not just names on stones, but have stories behind them. The Newser reported on a few of them, Jacob Bolton/Lothi Aeon and the story of several US Marines from the same fire team who died in action or of wounds as described by a brother in arms, the one in the team who made it home.

The front section of The Wall has a number of flags overhead, with the United States and Canada in front. All the flags represent democratic republics. In the middle of the sections of wall is a fountain. It is surrounded by poppies and the flags and emblems of the six branches of the American military, the Army, Navy, Air Force, Marines, Coast Guard, and the newest one, the Space Force. 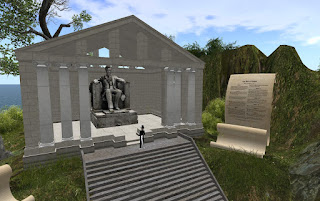 Surrounding The Wall are smaller displays, such as the Canadian Memorial, the September 11 Memorial, and the P.O.W. Memorial. There are two stages, the main stage and a smaller stage, for events. There are also displays of tanks and other ground vehicles, and a few planes in the air. There's also a couple ships, a battleship and a destroyer, on display in the water. There is something new this year. Previously, there was just a picture of the Lincoln Memorial. Now, it's an actually three-dimensional build, Lincoln Statue and all. 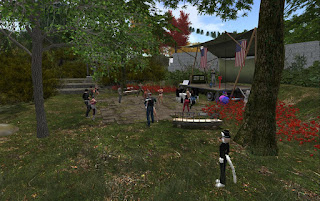 Monday November 1 was the opening of the Tribute, and that afternoon and evening there was an eight hour party at the smaller stage to celebrate with four DJs playing for four two-hour sets. I dropped in while Flattop Ewing was DJing, and it seems he hadn't played in a while, one lady saying, "Soooooooo great to hear you DJ again, after (over) ten years." Flattop laughed, "Right Dena? After (over) ten years, I think I might have lost a step or two?" There was more talking and joking. Eventually they told me that earlier, Ekim Linden had dropped by in a pinata avatar, showing me a picture. 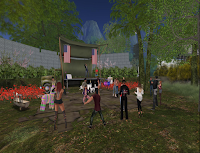 Flattop and I would talk a little after the part. Of the Memorial Wall, "A lot of those names up there, I have heard some amazing stories over the years. Some will make ya cry, and then some will make ya cry laughing. ... Met a lady two years ago here. She lost her husband in Vietnam, she lost both her sons in Desert Storm, she lost her grandson in Afghanistan." He looked back at how long the Tribute has gone on, "Fifteen years now, absolutely incredible.  I think it showed that Second Life actually NEEDED a Veterans Tribute like this. I never even dreamed it would go this long." He appreciated the attention the Newser had given the tribute over time, "I love hearing the stories, so we never forget."

The Veterans Tribute is scheduled to be up until November 15. After that, it will soon fade away for another year.