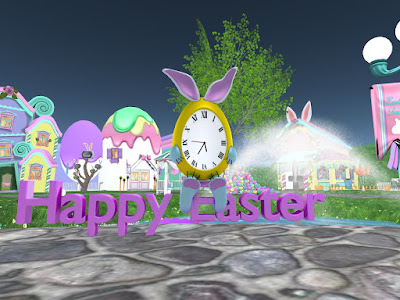 Laura Liberty does it again! Easter Town is ready for kids and grownups, people, animals, furries  to roam and have fun. Decor and outfits for Easter are in the cute shops circling the town. 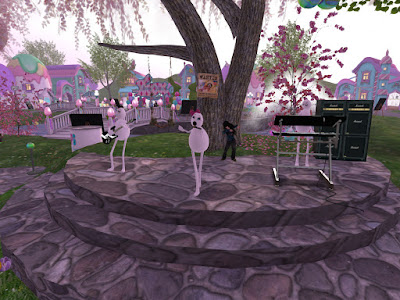 I love the band that is entertaining just across the bridge from the entrance. The carrot car is a fun way to travel the roadway but be careful! There are other ways to travel that you will discover . I enjoyed the bubble ride .The balloon ride is always  a good look from above to check out all the possibilities. 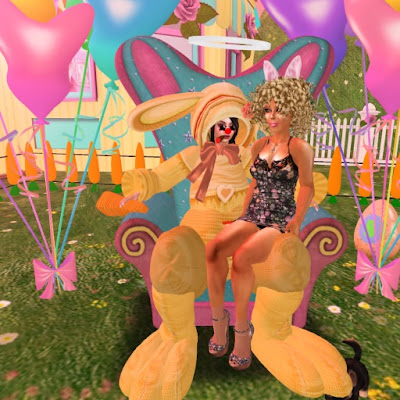 I like to walk the roadway because there is a multitude of activities between the shops. tina (tanyja Resident) is sitting in the bunny chair where you can  take a picture with a bunny, and she is a strange bunny as usual. Here is my friend , Dally(Dallas Russell).  posing on her lap. 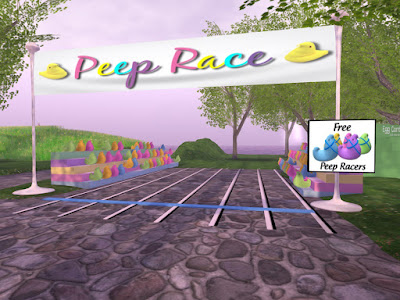 Absolutely do not miss the Peep Race.. If you don't really want to race at least go around the track to experience the sights along the way. I liked the peep papparazi I met on my tour. The track is not as easy as it looks at the start. 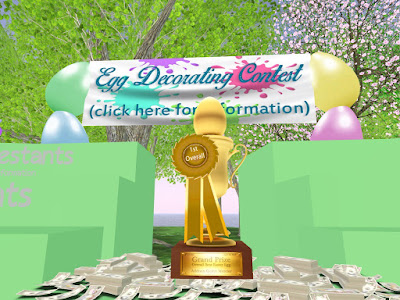 When you land pick up the information for the egg hunt. Lots of nice goodies in those eggs and number 1 is right there. The rest will not be that visible. Have fun! For those with talent in texturing there is an egg painting contest with a prize of  7000 overall. Check the decorating area for the notecard explaining all the rules to follow to qualify and all the prizes! Good luck to those who enter! 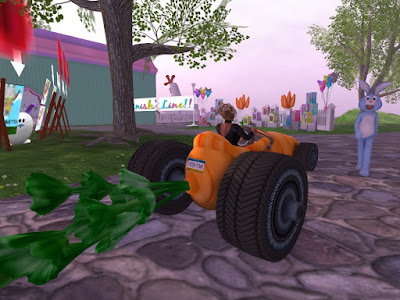 There is much more to explore and experience in the sim and fun adds to collect and wear . Make sure you get there this coming week before Easter. I could go on and on but want you to find your own amusements . However look for the freebie Bunny-hoppy Ball and others!!

Gemma Cleanslate
Posted by Bixyl Shuftan at 8:00 AM No comments: 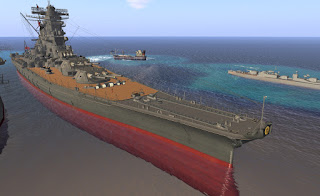 Although the age of the battleship has passed in naval history, they still have quite an impact on people. For Japan, the battleship that is the most symbolic to them is the Yamato. It (along with it's sister ship the Musashi), was the largest and most heavily armed battleship in history. In April 1945, with the war going badly for Imperial Japan and islands near Japan threatened with invasion, the ship was sent on what was essentially a suicide mission to stop the American offensive, or at last cause as much damage as possible. But the ship was spotted before it could make it's way to it's target area, and after repeated bombs and torpedoes hit, the ship finally sunk, taking with it all but 280 of it's crew of about 3300. The Imperial Navy would never again launch another major operation. After the war, the ship's loss was remembered as a brave but futile act by sailors trying to defend their homeland. As the name "Yamato" is sometimes used as a poetic word for Japan, the sinking of the ship was seen by some as a symbolic end for the Japanese Empire. The ship remains part of Japanese culture, appearing in film, anime, and magna, such as in "Space Battleship Yamato" or "Star Blazers," when the Yamato is rebuilt as a spaceship. 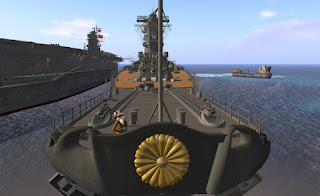 The ship was written about in Second Life Newspaper in March 2009. Maddy Gynoid would later state that the ship was built in 2007, entirely with "classic" prims. But by March 2012, the ship was gone. But on September 2013, it was back. That would be the last the Newser would hear about it for a while. Recently, the Newser was alerted to a story in the "Real Virtual" blog by Maddy Gynoid that the ship was returning after it was apparently gone for a year. So I decided to stop by. 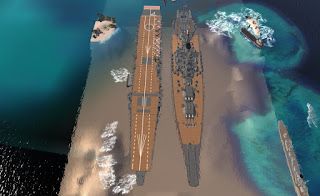 The SURL I saw in Maddy's story took me to the Yumix Ocean sim at (66/173/21), which borders the place where the Yamato is just to the north. Appropriately enough, the sim is called "Yamato Memorial." To my surprise, I saw the owner of the Yamato's neighboring sim, Yumix Writer. "Sim of a battleship restored two days ago," she told me. She pointed to Maddy's article, saying when he found the ships, the sim had just been created and was still inaccessible. But heading over, the area could be entered without trouble. The only limitation was that one can't teleport onto the battleship or any other ship in the sim, but only onto a small island in the northwest corner at the sim at Yamato Memorial (25/222/21) 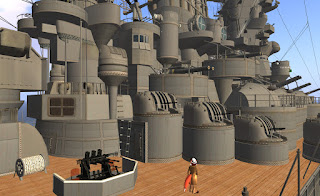 The ship takes the length of the sim, and it's nationality is clearly distinguished by the Imperial Japanese flag, and the chrysanthemum symbol mounted on the bow of the ship. The ship is heavily armed with nine 46 cm (18.1 in) 45 caliber Type 94 naval guns on three turrets as the main armament, the largest kind ever mounted on a warship, Each gun was 21.1 meters (69.3 feet) long and weighed 147.3 metric tons (162.4 US tons), and could fire shells at targets 42 km (26 miles) away. The ship also had six 155 mm (6.1 inch) guns in two smaller turrets, and 24 127 mm guns. There are also many anti-aircraft guns on the ship. 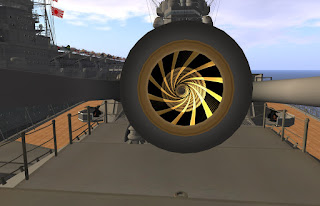 There's a good amount of detail, such as the rifling of the main guns.  And one can make their way to the bridge with ladders. The inside of the bridge is somewhat lacking, but the detail elsewhere makes up for it. The Yamato can only be called a first-class build. 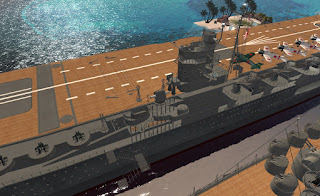 The Yamato is joined by other ships in the area. Next to it is the Imperial Japanese carrier Akagi. Both the Yamato and the Akagi were part of the Imperial task force in the Battle of Midway, but the battleships never saw any action while the carriers were sunk. The carrier has a small tower and bridge, and a number of planes on the top flight deck, a mix of fighters and torpedo bombers. 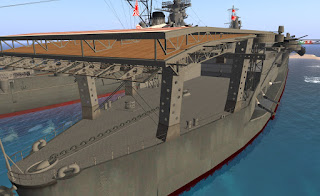 Besides anti-aircraft guns, the Akagi also has cannon: ten 50-caliber (23 cm) guns, six of them located in swivel mounts in the back. Why would a carrier have big guns? The ship had been built in the 1920s before it was fully realized how much of a disadvantage a carrier would have in a ship to ship duel without planes. The ship's main smokestack is located in an odd position: mounted on the side of the ship and angled downwards. 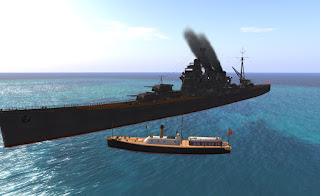 There are three other smaller ships in the vicinity. Also in the Yamato Memorial sim is a cargo ship and a Fubuki-class destroyer. These ships have been called the first modern destroyers, dangerous opponents in a fight even against much newer ships. The ship has both guns and torpedo launchers. To the north in Yumix Small Town is a Takao class heavy cruiser. Besides a distinctive bridge, the ship has five turrets with ten eight-inch (20.3 cm) guns. 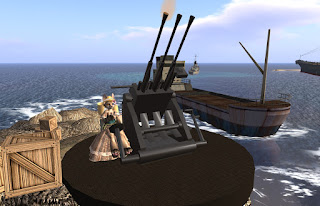 In the past, there was a seaplane on the Yamato that could be boarded and launched from the catapults in the back. There was also a display of photographs in the interior, though could only be seen by panning around. Unfortunately, neither is available this time. But the ship is still very well done. The island to the northeast does have a gun that can be fired if one wears a HUD, as well as a small balloon launcher. It has a seaplane that can be boarded, but not flown. The northwest island has an Imperial tank, another anti-aircraft gun, and a bunker. 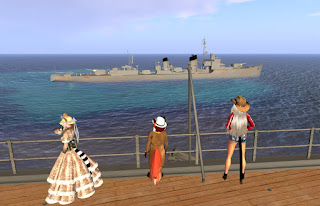 It seems that the Yamato has been used for some events. Maddy once found the ship all decorated for someone's wedding. He himself felt a battleship as the setting for a wedding was a little odd, "a wedding in front of the mouth of a 46cm gun is a bit brutal, but who knows."

The Yamato, and the other ships, were made by Masakado Allen. Besides his ships, he also has a page on Marketplace selling warplanes. 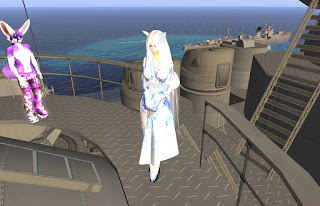 Mentioning the ship to friends, some wanted to see the vessel, fans of the "Star Blazers" anime, history buffs, and others.  So if you and your friends have a love of history, ships, and especially both, head on over and see the builds for yourselves.