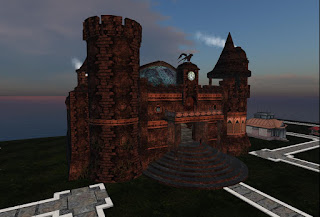 Longtime readers may remember the Primal Passions club by Rayven Avalira. From 2014 to 2016, this castle made into a club was an adult-themed venue that had regular events and some special ones such as a band tribute that raised money for the Relay for Life under the Sunbeamers and two of Nydia Tungsten's "Twisted Christmas" events, as well as being the setting of one of her videos. Recently, she as Rayven Wolfmoon brought back the castle under a new name, the Wild Wolves Club. The venue is in the Belvedere sim. 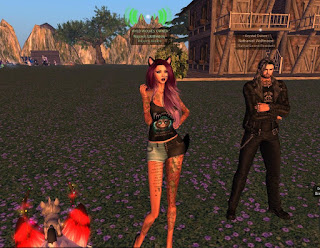 When talking to Rayven, much of the time, it was in voice. So I could take only a few notes. She runs the place with the help of her partner, Nathaniel Wolfmoon (NathanLeonel Resident). Technically, the club had reopened on Sunday June 27, with Rayven breaking a personal DJing record of six and a half hours. But the place then was an open-air club. But friends kept saying how much they liked the castle, so she brought it back.

Rayven was saying she doesn't intend for Wild Wolves to be a seedy strip club, but she does aim for a casual atmosphere where those coming by can relax and have a fun and wild time, "plenty of rules in real life, people just need to let their hair down and relax." She does have a few hostesses and DJs lined up for events, "I already have DJs lined up ready to go. Now I just need dancers," but last I heard she was still open for a few more. And as before, the place is still open to avatars of practically any kind as long as they can fit through the front door. 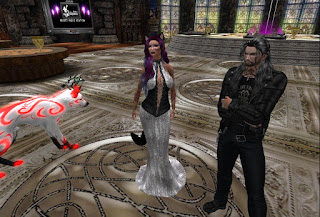 Rayven showed me a couple cars to be raffled off soon, made by Fhionn, "a smokin hot job." Besides a car maker, he was also a DJ in real life and Second Life.

I was at a few parties (pictures not available as some had little clothing). For part of the time, Raven was on a stage in front of the crowd DJing for them. Other times, she was in the middle of them, her saying earlier she liked to "go out into the crowd and engage with them." The events a few furs and feral avatars mixed in with the human avatars. With a couple of the parties, wearing little to no clothing was encouraged, and the music a tad raunchy. There were plenty of pop tunes with a little metal mixed in. 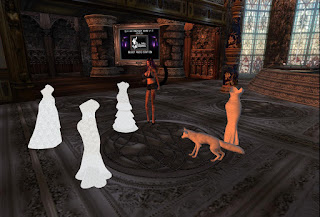 But Rayven's talents are more than just DJing. She showed me a few dresses she had been making: wedding gowns. The four were distinct and different designs. She had been told by someone who saw what she could do, "you need to stop hiding what you make." So she planned to sell dresses for about 300L. Something she was working on currently was a butterfly dress with a harness in the back, so a girl could look "fun and flirty" without appearing loose. She was also working on some lace lingiere, "Rapture," which hid practically nothing.

Besides the club, the area had other places. Nearby, there was what Rayven called a market area, which stood before the castle like a village, "for content creators whom want to display their creativity." The stores were 225 Lindens a week each with room for 100 prims. Adult furniture could be sold in them, but it was against the rules for it to be used. 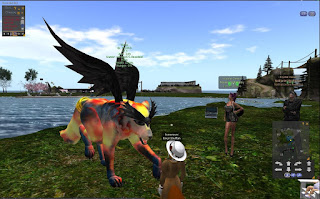 Next to Belvedere was the Green Pastures sim. In contrast to the adult nature of the castle, this area was more family friendly, Rayven saying some wanted to bring their "littles" with them. One kind of breedables, Chimeras, could be used to fish. So there was Chimera fishing. There were also classes on how to better use Chimeras. There were also Battlebeast vendors. The sim also had a breedable market there, with anyone renting three weeks getting the fourth for free. There were also auctions, with those putting pets up for auction paying a small fee. Rayven and Nathaniel took me to a large skybox area over the sim. The place had been decorated a little by Damien Dusk, the owner of Obsidian Chimmeras. 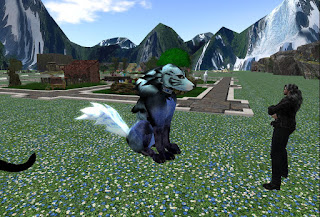 There has yet to be a set schedule for the Wild Wolves Club. But the way things look, it has a promising start for those who are looking for a fun time and don't mind a little nudity. And with the club part of an area with plenty to do, and with Rayven getting into dress designing, it looks like she will continue to be active in a variety of things for some time to come.