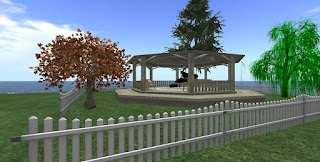 The Park has no official name.  The only thing about the Park is that it had been created in Ari's honor.  Who is Ari, some people might ask.  Ari is a piano player on Second Life who travels from sim to sim, playing beautiful piano music.  Second Life is something that's real to Ari.  That's why he plays the piano on Second Life
because he can only play the piano on Second Life, not in real life. Along the way, Ari had made many friends.  What Ari had done for so many people cannot be forgotten.  He had played so many different piano pieces.  But playing piano is not the only thing Ari had done, and that is the reason why the Park had been created for. 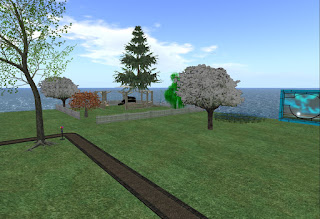 Ari is a friend to many people.  Even while he is playing his piano, he would always find the time to have a conversation with someone.  Ari would usually gives a compliment or he would just listen with a gentle smile.

That's why the Park was created on Cape Heron.  It was created because Ari is more than just a piano player.  He created beautiful music that many people would get together and have good time.  That's what it is all about.

In more than one way, the Park serves as a thank you to Ari for his beautiful music and being there for people.  I have a good feeling that the Park is going to be around for a very long time.  That's as long as the owner of the Park can continue to pay for the Park.

If anyone would like to listen to Ari's music, his piano schedule can be provided at the request.  Ari plays his piano on Second Life every day. The Park is there as a tribute to Ari and his piano music.  Today, he is unforgettable as the piano player who would travel from sim to sim just to provide beautiful piano music to people.

For these who enjoy the piano music, I recommend going on Second Life and contacting Ari for his piano music.  He is really an unforgettable piano player and that is why the Park had been created in his name.  Thanks, Ari. 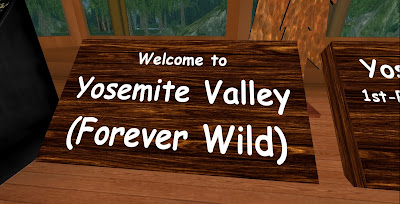 It is always a treat to get over to Yosemite for any reason, exploring, horseback riding, shopping. Sunday morning I was lucky enough to have time to make it to the brunch that is held on the first Sunday at 10:00 slt. The Coffee Shop is the site for breakfast and is nicely set with a big buffet waiting, Eggs, sausage, pancakes, sandwiches, cappuccino... and other goodies are for the choosing. 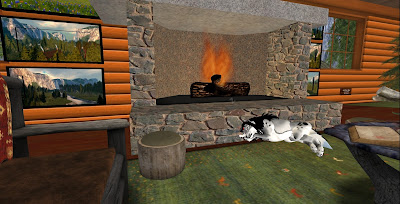 There was a roaring fire in the fireplace next to which fleegle Mumblewood was taking a nap. 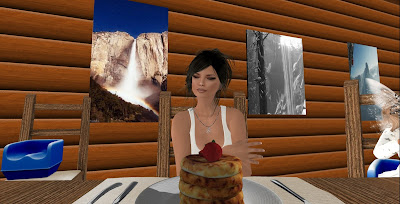 Jadyn Firehawk , the owner  invites and says “These meetups are low-key social gatherings with casual conversation and friendly people to meet.“ There is also a campfire meet held on first Friday at 5:00 pm slt to suit the varied timezones and all are invited to both or either. 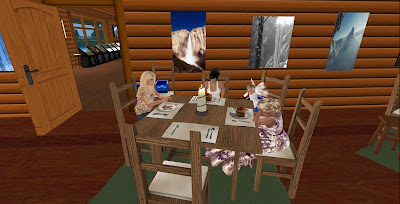 There was a nice group of visitors attending the brunch and having conversations that were eclectic. Reference to the weather around the USA, the possible incoming storms next week, and wild fires in California. This led to more conversations about Yosemite and the actual good that wild fires do there in the area of the Sequoias . By clearing the understory it allows new sequoia to grow. Jadyn supplied a few links to view the so called firefall that has a long history at the park. Some who have been to Yosemite talked about their experiences of the sight of the giant trees, the new ones growing and the size of the seeds.. like footballs! The visitors joined in the conversation as they were interested in the topic. It was all very informal.

Yosemite has also added new 7Seas fishing areas in the region. This whole area of the park is covered by servers.What  a wonderful place to sit in nature or ride a horse or just wander and fish to raise your experience points while enjoying the surroundings. 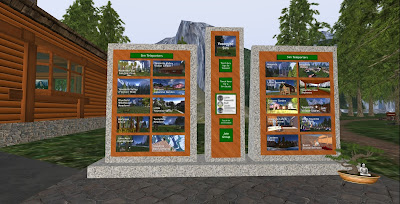 Getting around at Yosemite is very easy. There are wonderful TP stations where visitors can choose a location and get there immediately. Visitor guides are available at the TP boards so grab one to keep. It contains all the areas to visit and the landmarks. Stop at the visitor’s center to get an idea of the real Yosemite and pick up lots of information about the wonderful park itself.Jadyn had set up a wonderful display of stones for us to take with  Then choose where you would like to visit.

This will put you at the new fishing pond at the Visitor Center where you can start your adventure. http://maps.secondlife.com/secondlife/Yosemite/134/147/2653