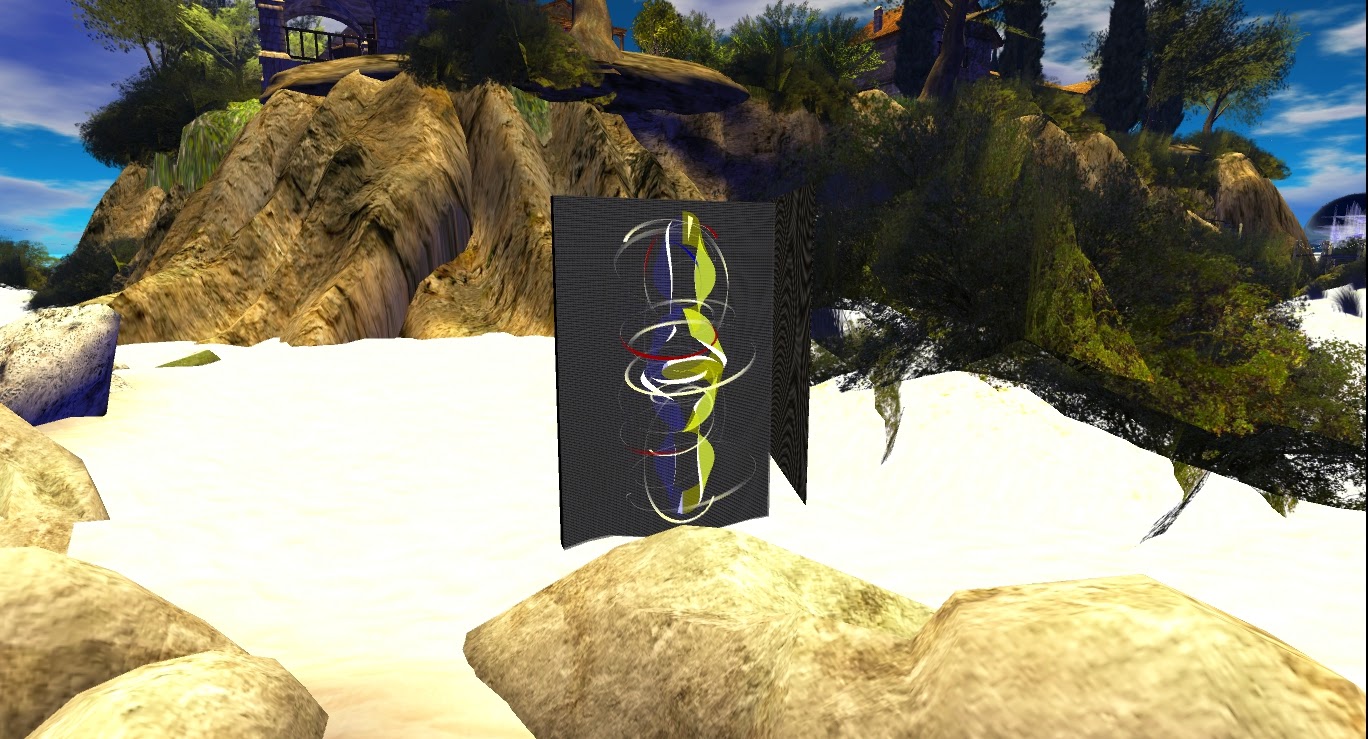 I have been to Otium several times. Franz Markstein , the owner, has created this lovely quiet place on Serena Long Cay for the pleasure of the visitors. He says, “Otium is Latin for leisure and laziness. Otium also explains the philosophy of this archipelagic retreat. Get away from your necessities and obligations and slip into the intellectual leisure of the creative dimension. Otium is the ideal place to relax.“ 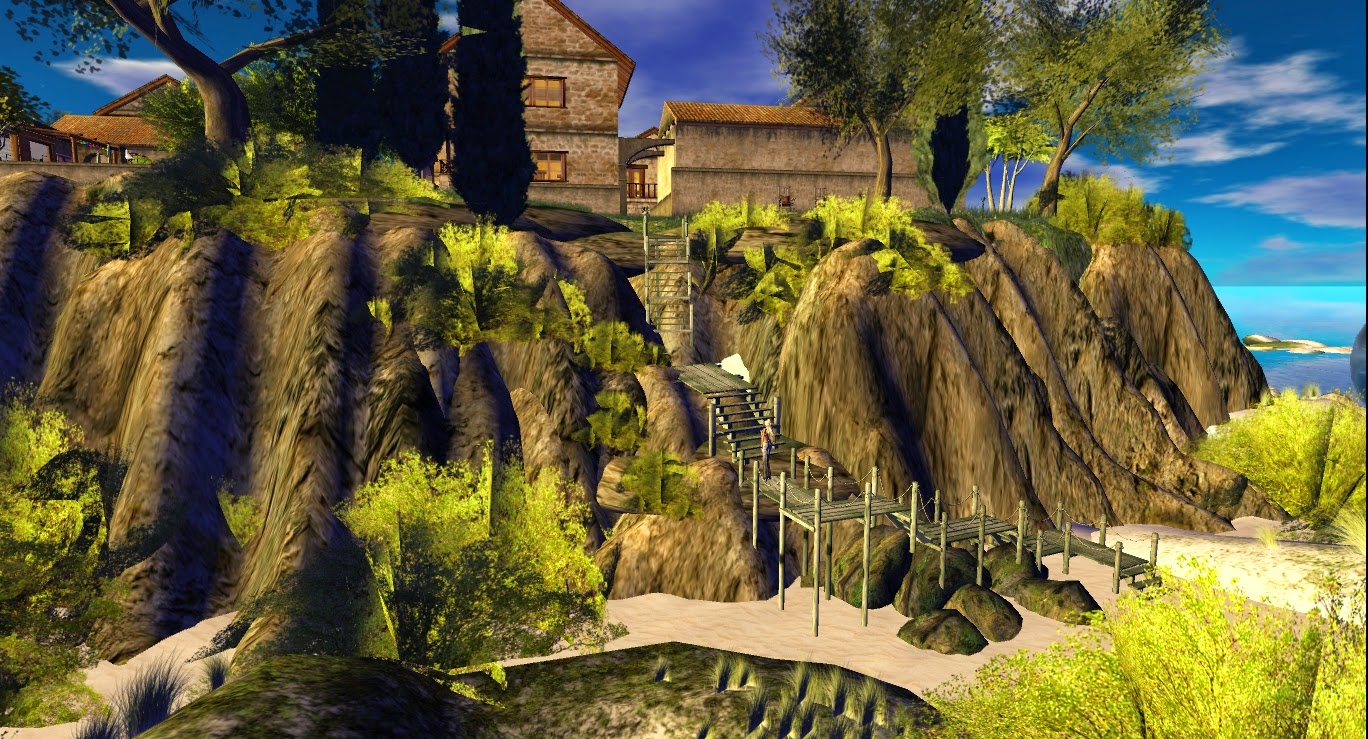 There are expansive beaches with relaxation places, tiny islands, some of which are private as I found out by the warning. The sounds of the waves and gulls and the views from the beach are so welcome after the business of Second Life. The town sits on a pinnacle reached by a winding steep stairway. Here you find quaint homes and shops, patios and bars in the walled village. It is a very relaxing place. 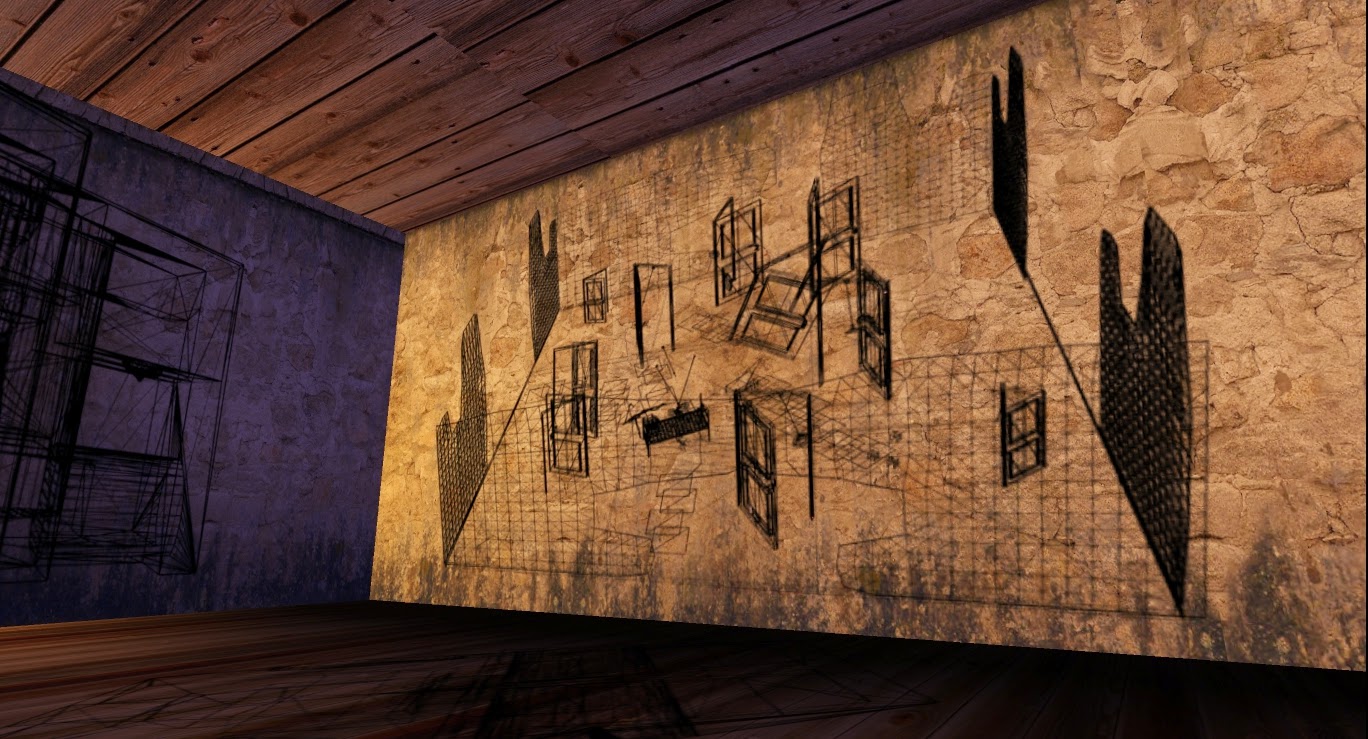 Now there is an added element to add to the your enjoyment, LINE exhibition permanent of Giovanna Cerise. I have written about Giovanna’s showing of her pieces in LEA and also her Retrospective some months back. When you land you will be in a building where you will see her art on the walls and suspended in air. As you walk out there are pieces spread all throughout the town and outside the walls on the rim of the cliffs. Down on the beach there are more pieces sprinkled across the beach so take a walk there not to miss any. 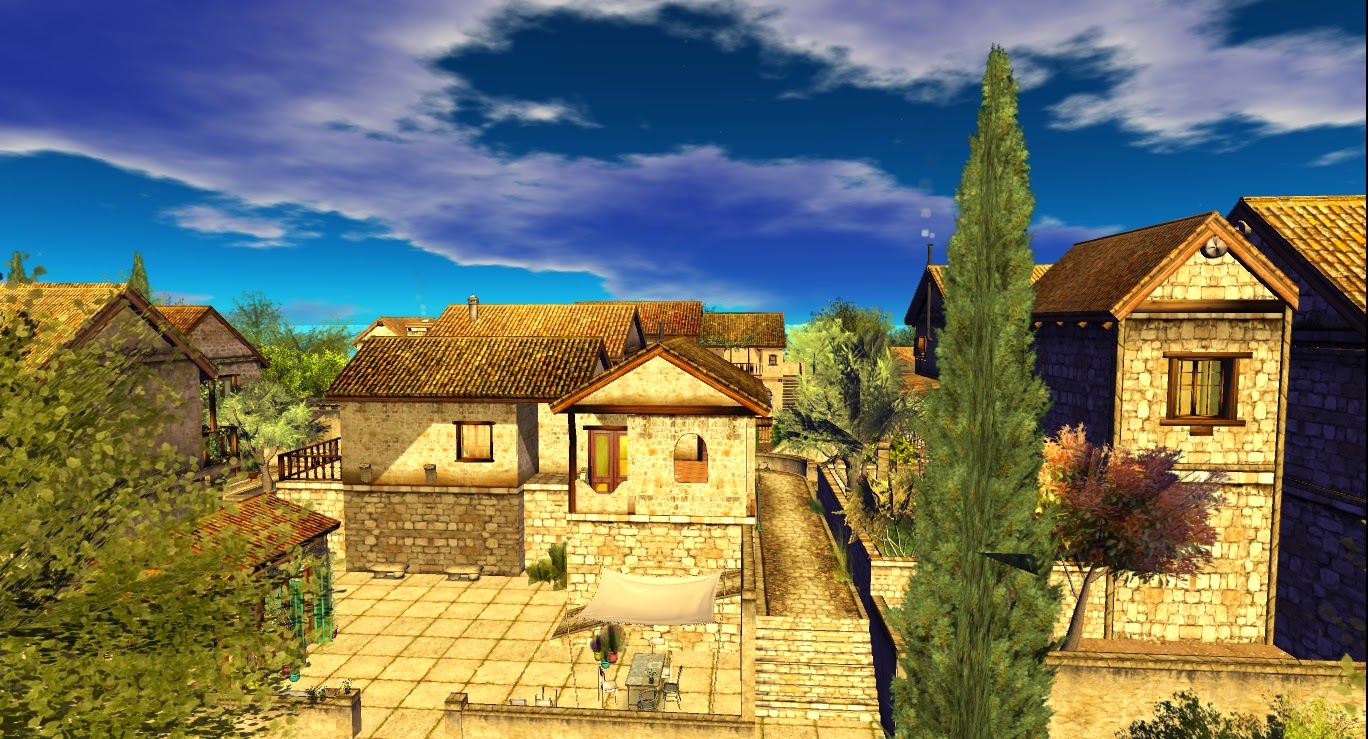 Giovanna describes the exhibit as, “Creation of a path-research on the infinite freedom hidden in two-dimensional and three-dimensional size. The line, with its lightness incisive, inspired the transposition of the complexity of the solid structures of some of my work in new areas, expression of pure essentiality.”
The pieces are diverse . Out on one of the islands I found ghostly figures hovering over the water called Sirene. Ice Castle on the beach is interactive so hop in.

I know you will enjoy your visit and perhaps return many times to explore the setting . Pick up a notecard at the landing place that has landmarks for various art pieces to help you along the way. Begin your journey here in the ‘museum’  then wander the streets before you make your way to the beach.
http://maps.secondlife.com/secondlife/Serena%20Long%20Cay/193/54/39
Gemma Cleanslate
Posted by Bixyl Shuftan at 6:00 AM No comments: 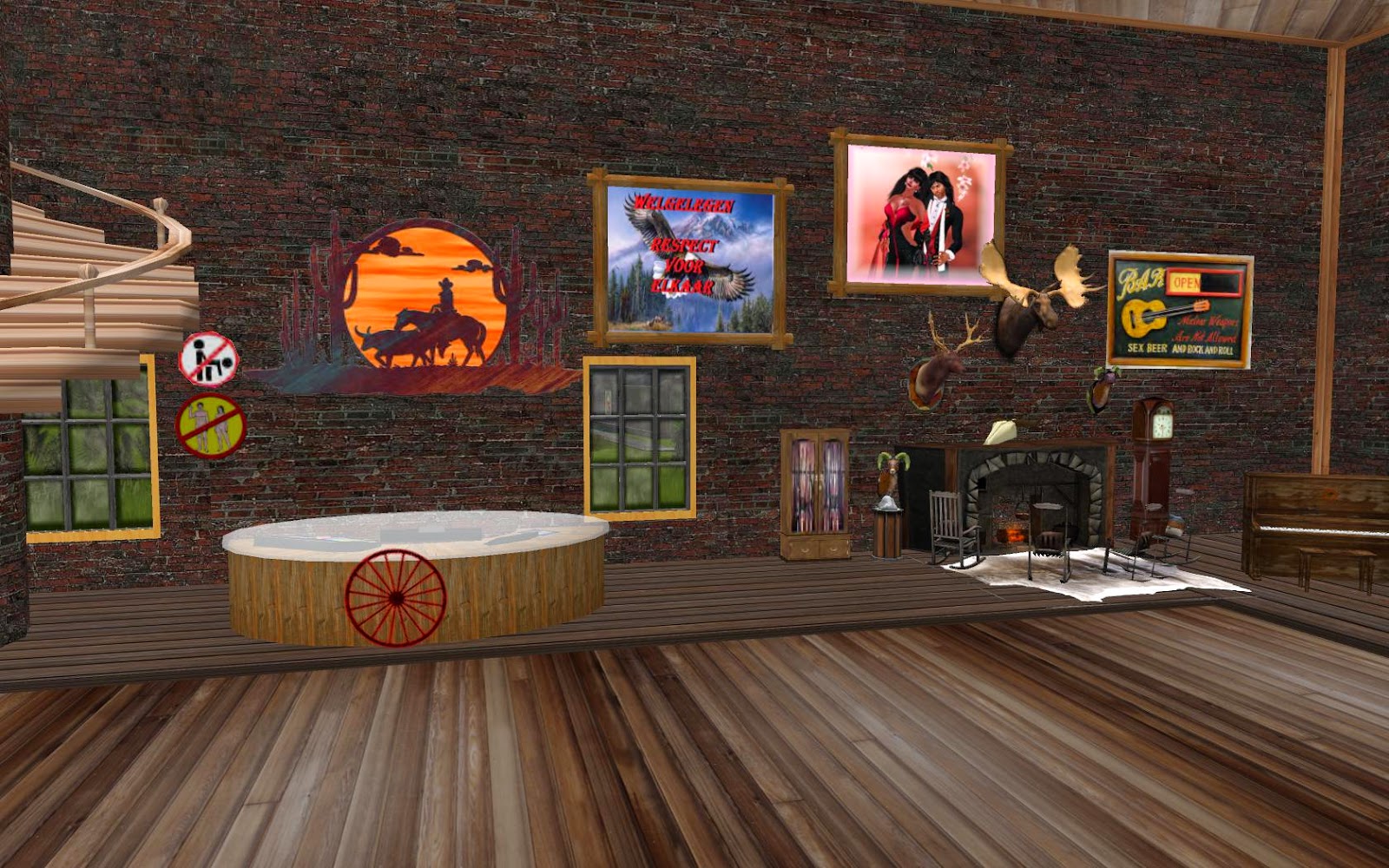 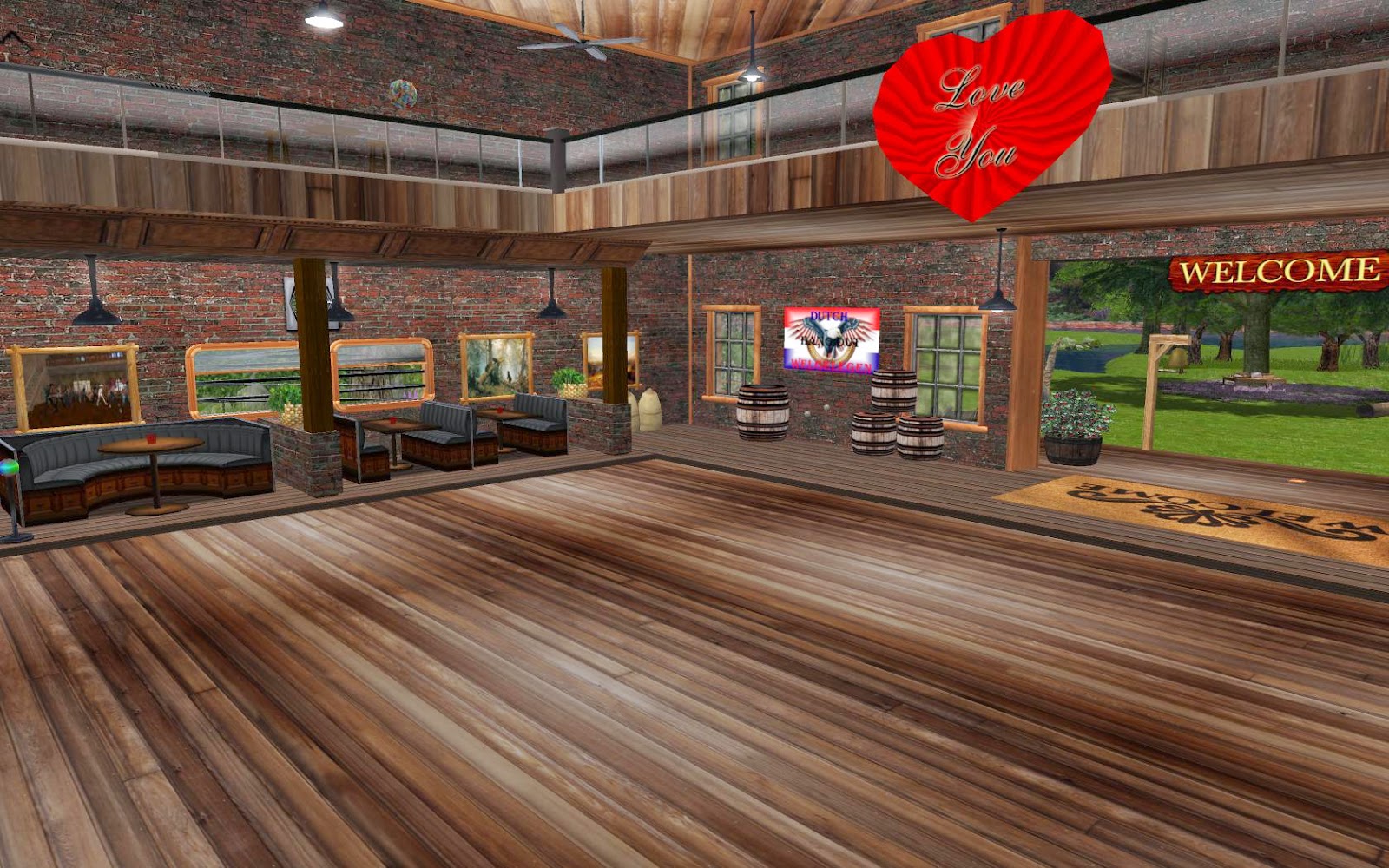 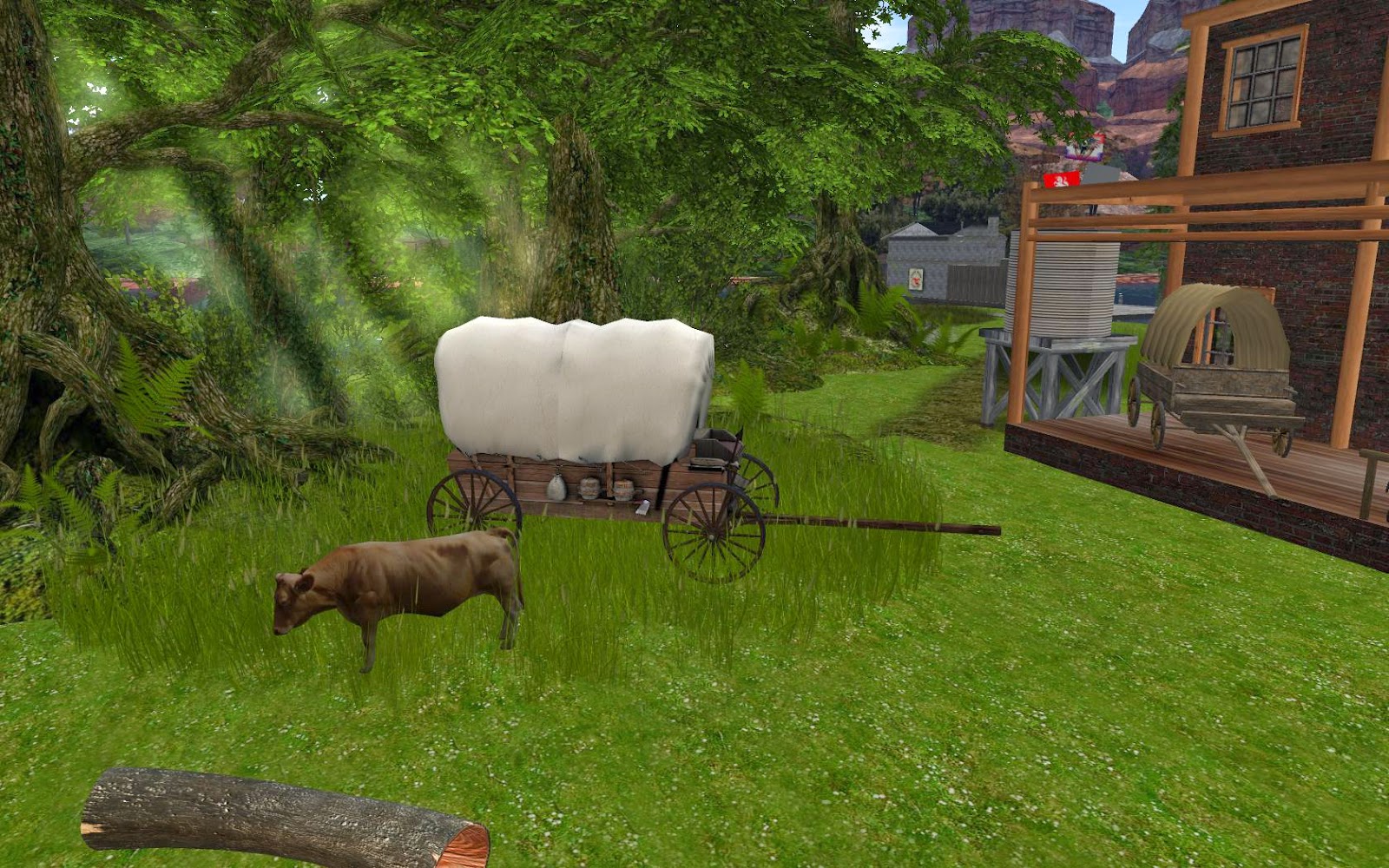 Recently a friend showed me a place she and her boyfriend sometimes went to, and thought others might want to experience it as well. The place was the GB Island North sim, the public section of it known as "Friendly Bear Romantic Forest." 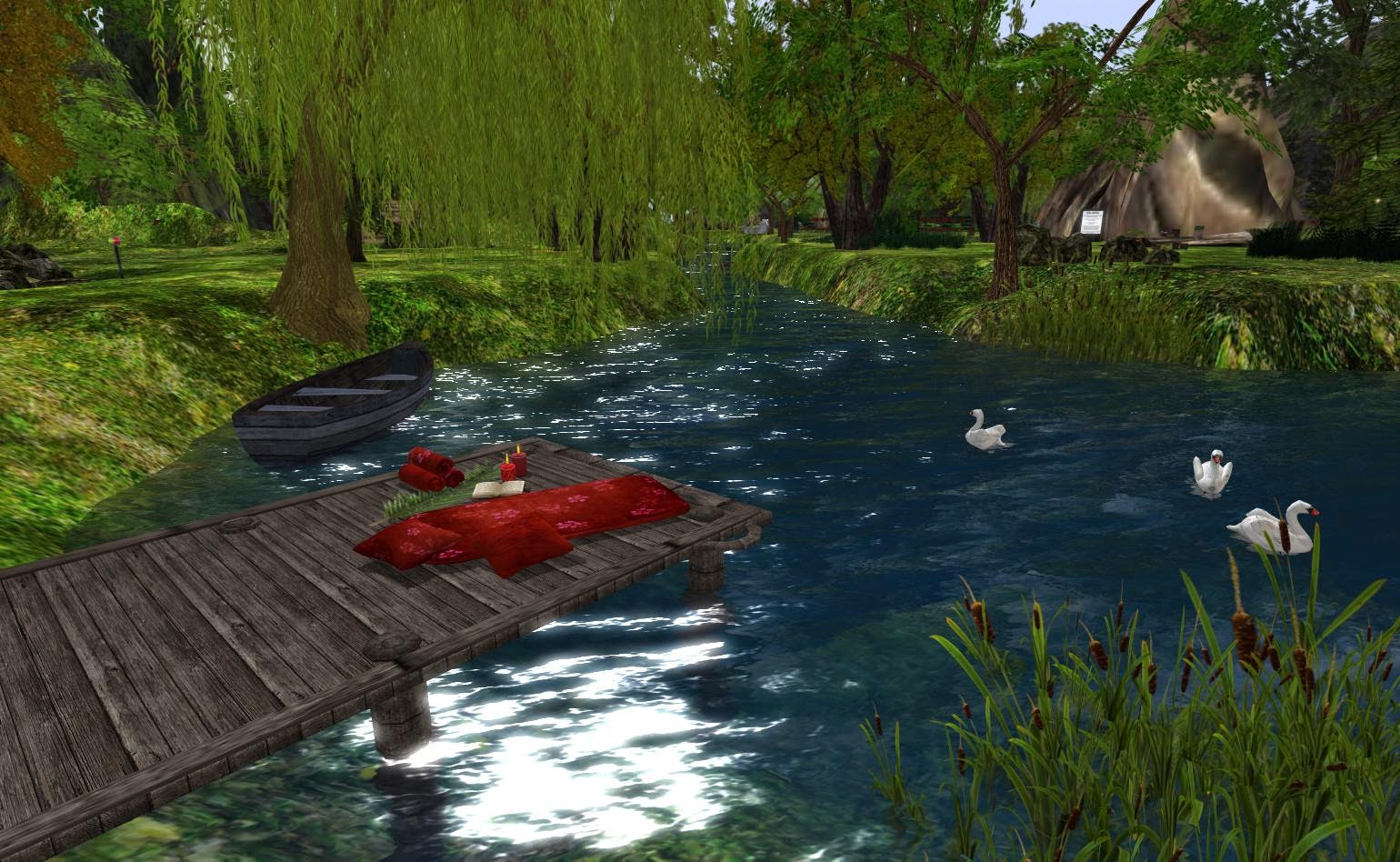 Dropping in, I was surrounded by a detailed forest, with lots of flowers and trees. The place was not one continuous island, but broken up a bit with rivers crossing and smaller islands next to the main one with bridges allowing one to cross without the need to swim or fly. Surrounding the island is a panorama of mountains and trees.

There were a number of features around, such as a pier with a rowboat nearby, a campfire with sitting logs around it and a picnic blanket nearby, both of which offered cuddle spots for couples. A small waterfall flowed into a rocky creek. There was a small farm with horses, goats, cows, and sheep wandering about, young animals included. Nearby were a couple bears, one getting a closer look at a beehive. Romance wasn't the only activity available, there was an "En Guarde" game for those wanting to spar. 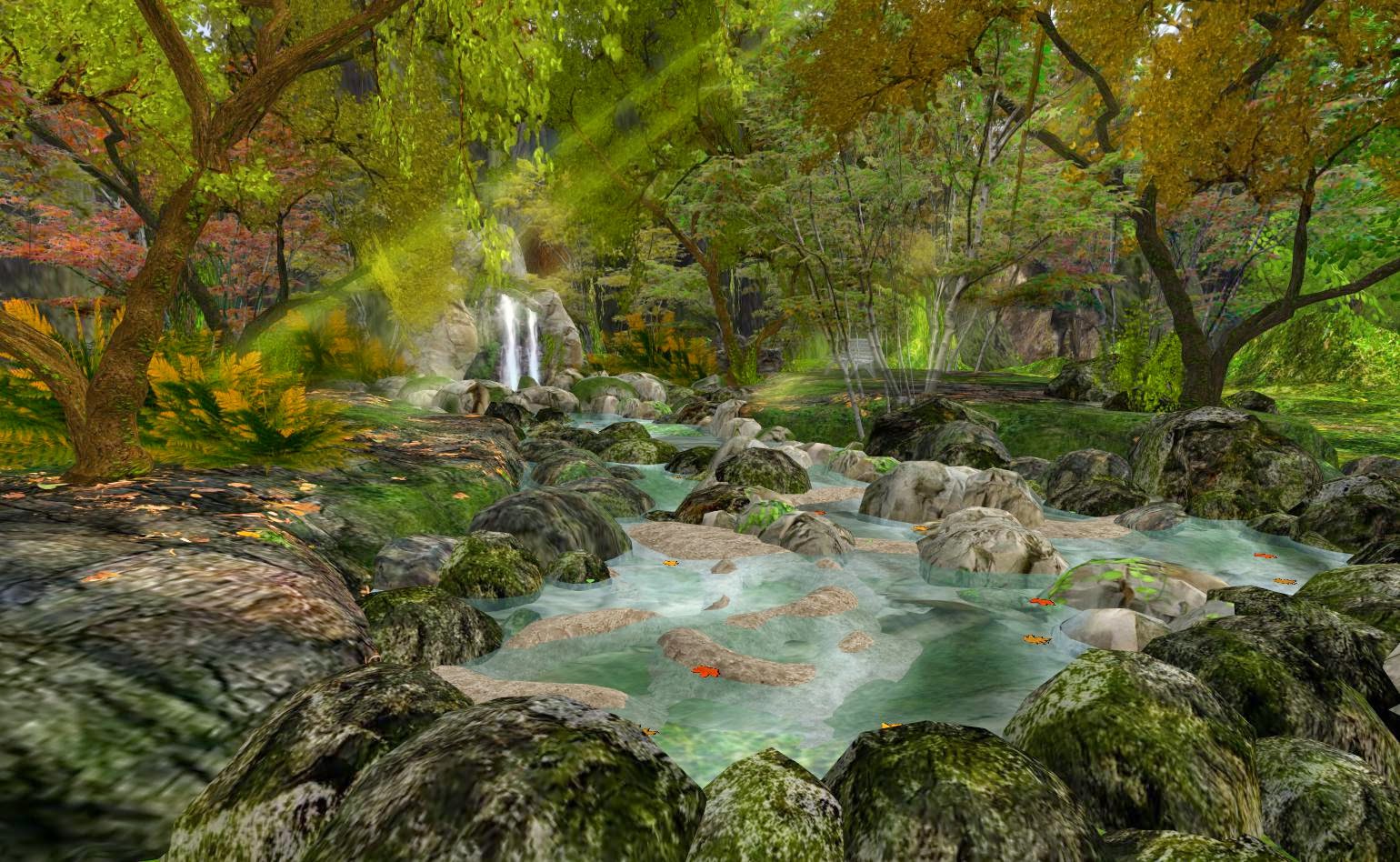 On arrival, I got a notecard about the location:

Hallo stranger! Thank you very much for your visit. This place was created with no commercial intentions. Please feel free to hang out, explore, relax, dance, love, be part of our music events and have fun!

Help us to celebrate peace and nature with these rulez:
- no guns
- no drama
- no kids avatars
- respect privacy of other visitors 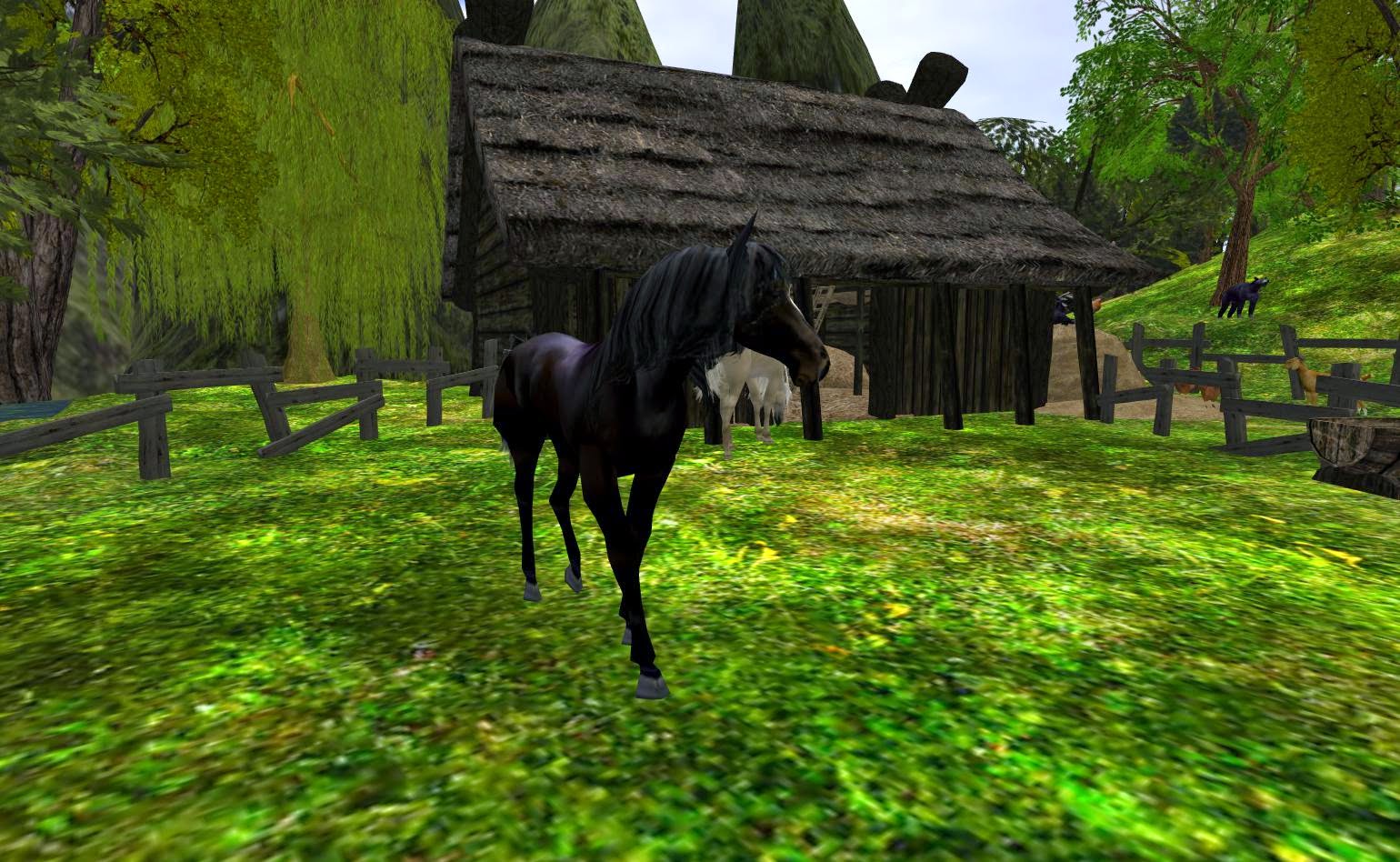 You are allowed also to rezz and use your own horses or bikes or blankets and pose balls..., but
do not forget to clean your stuff. Autoreturn is sending objects back in 15 minutes. To travel on this island you can use couple walkers or boats that are ready for you all over this place.
Big balloon and more coming soon.

Enjoy your stay. If you have a question, suggestion or request or a problem, do not hesitate and send a message to : Andie Rau, Friendly Bear Team 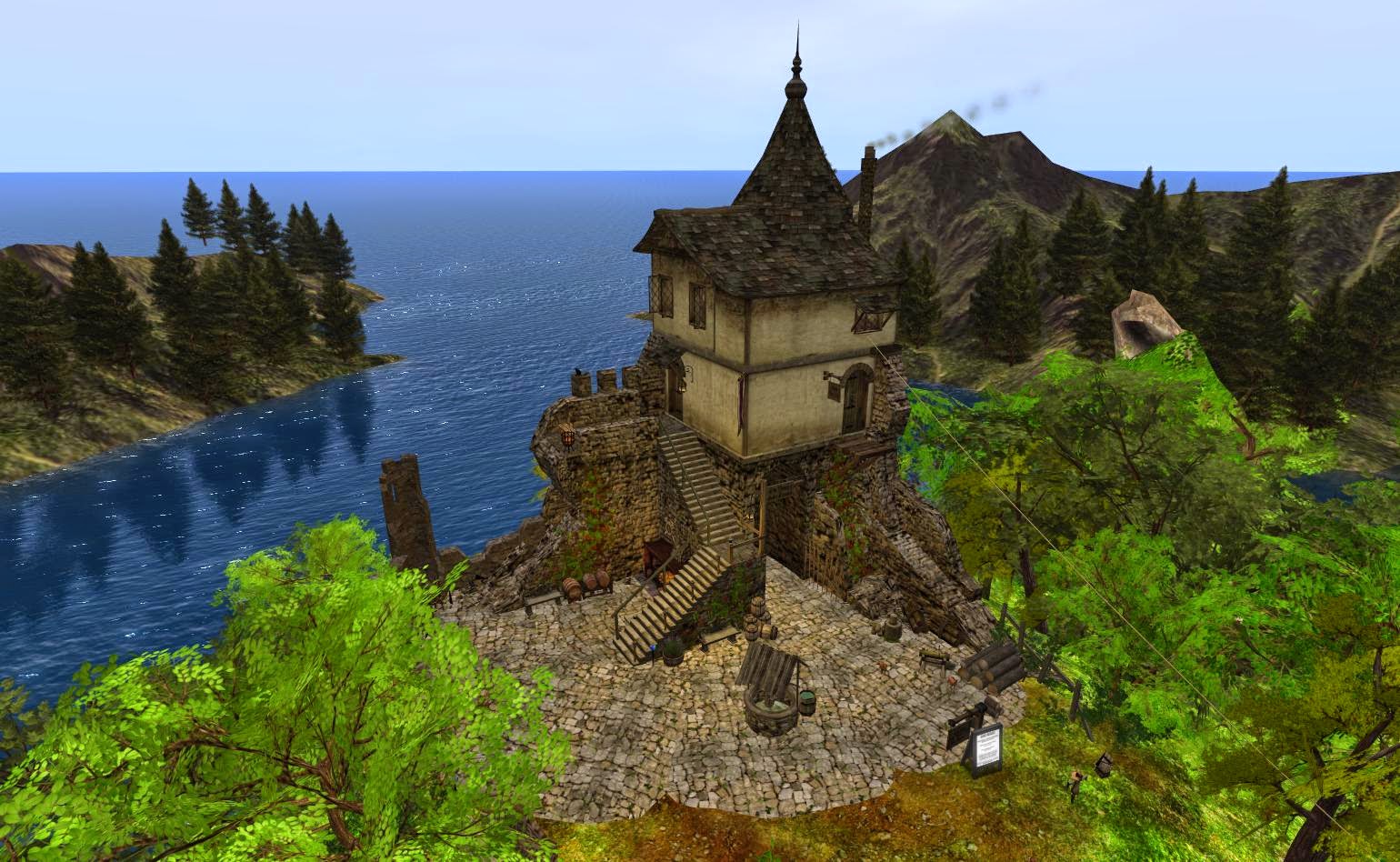 The "castle" was actually a dwelling built on the ruins of a castle, or rather what was left of the corner of one. It was named "The Bear's Hole Corner" at (225, 75, 32), near the eastern edge of the sim. On the stone floor was a fox and a deer, in addition to logs, barrels, a sword rack, and a couple stone crosses. Climbing up the stairs, the inside led to a fireplace and dinner table in addition to a throne and bookshelf. A door led to a zipline, which would take someone to near the barn and fencing game.

The top floor was clearly for couples. Visitors there will find a four-poster bed with a canopy, a bathtub with pillows and blankets next to it, alongside oils and soaps, and a bear rug on the floor. All have poses for singles and couples, the latter being much more numerous and some clearly meant for private moments.

Not all of the sim is open to the public. The northern third is barred to just anyone coming in, including members of the sim group. It holds a few private cabins. The founder of the place is GummyMedvidek Resident, or "Friendly Bear" as his display name is now. 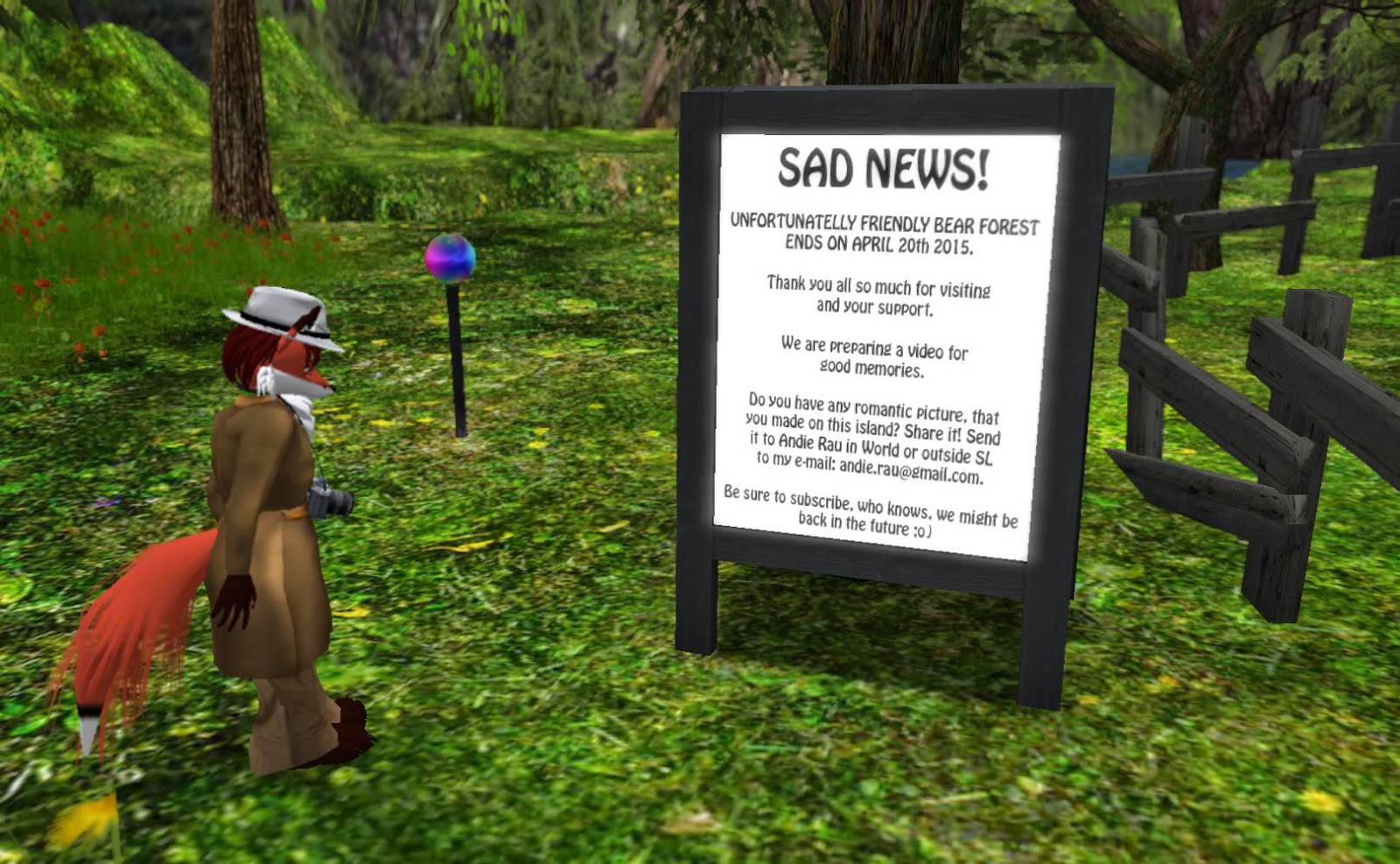 Unfortunately, the location's days are numbered. Scattered around the island were signs with the following message:

Sad News. Unfortunetly Friendly Bear Forest ends on April 20th 2015. Thank you all so much for visiting and your support. We are preparing a video for good memories. So you have any romantic picture that you made on the island? SHare it! Send it to Andie Rau inworld, or outside SL to my email: andie.rau@gmail.com.

The message ended with a hopeful note, asking people to subscribe in case the location ever came back.

There was a GB Island South, visible on the map, but with nothing connecting the two sims. Heading over, it was just a dance floor on an empty sim. There was a sign saying the sim was in the process of moving. Someone there greeted me, and didn't seem to be aware of goings on with their northern neighbor, sad to hear they were also going away.

Once again, the Friendly Bear Forest is at http://slurl.com/secondlife/GB Island North/ , and barring a reprieve will be gone April 20th.

Posted by Bixyl Shuftan at 6:00 PM No comments: 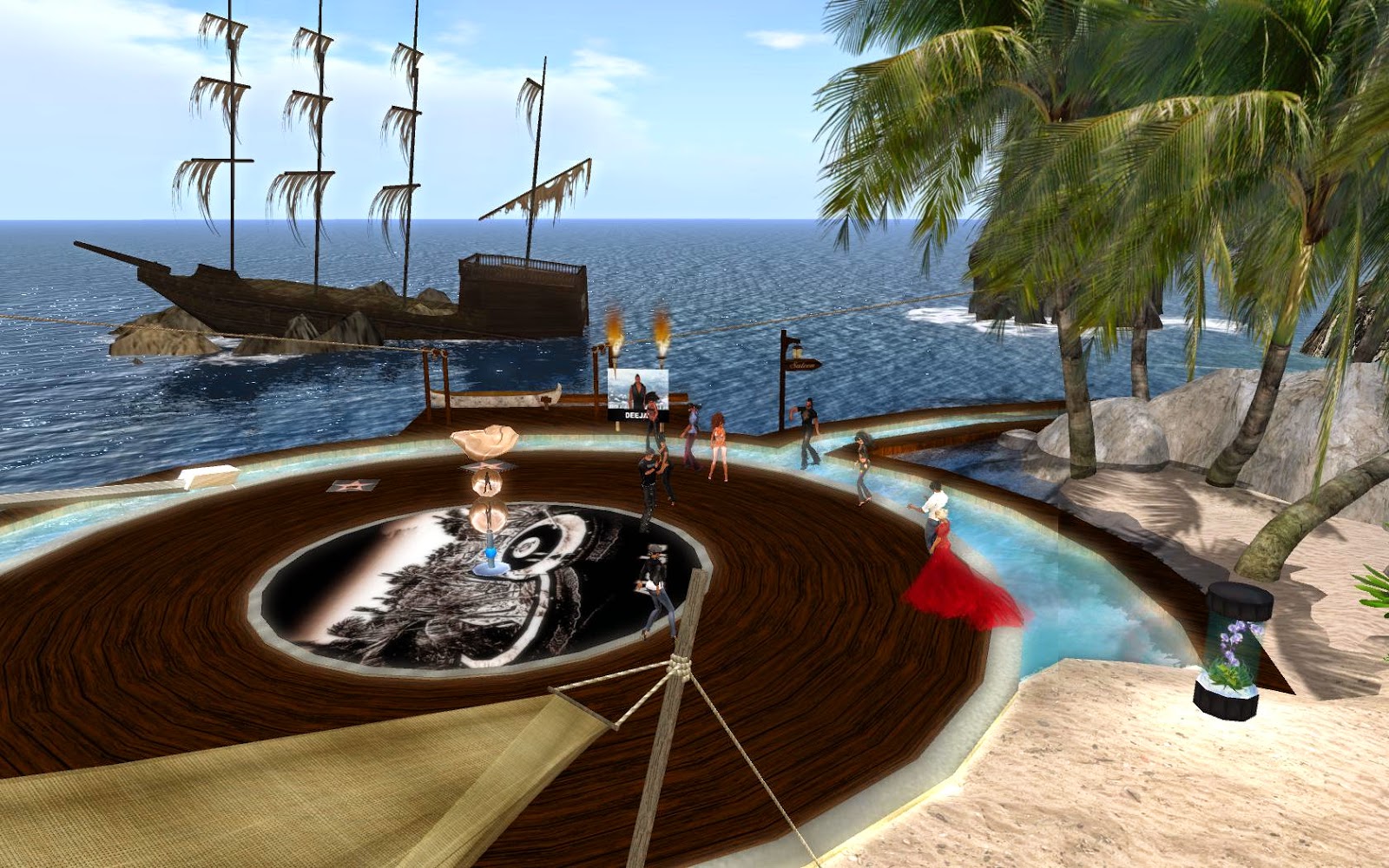 Dancefloor Alandra was created back in 2007 by Fig Valeska, and was then remade in 2010. Shortly afterward, the place was offline for 2 years. On March 9th, 2012 the club was re-opened in its current design. The current owner is DJDien Bailey.


The interior is special because it’s a spinning long playing record where you are standing on. It really moves, so you are both dancing and moving around. Your avatar seems to move on it and the same time you are still standing there. The rotating long playing record is really fascinating and intriguing at the same time. The nearby scenery is nice too. The club is on a sandy beach, with a half-sunk pirate ship nearby. Pretty neat. 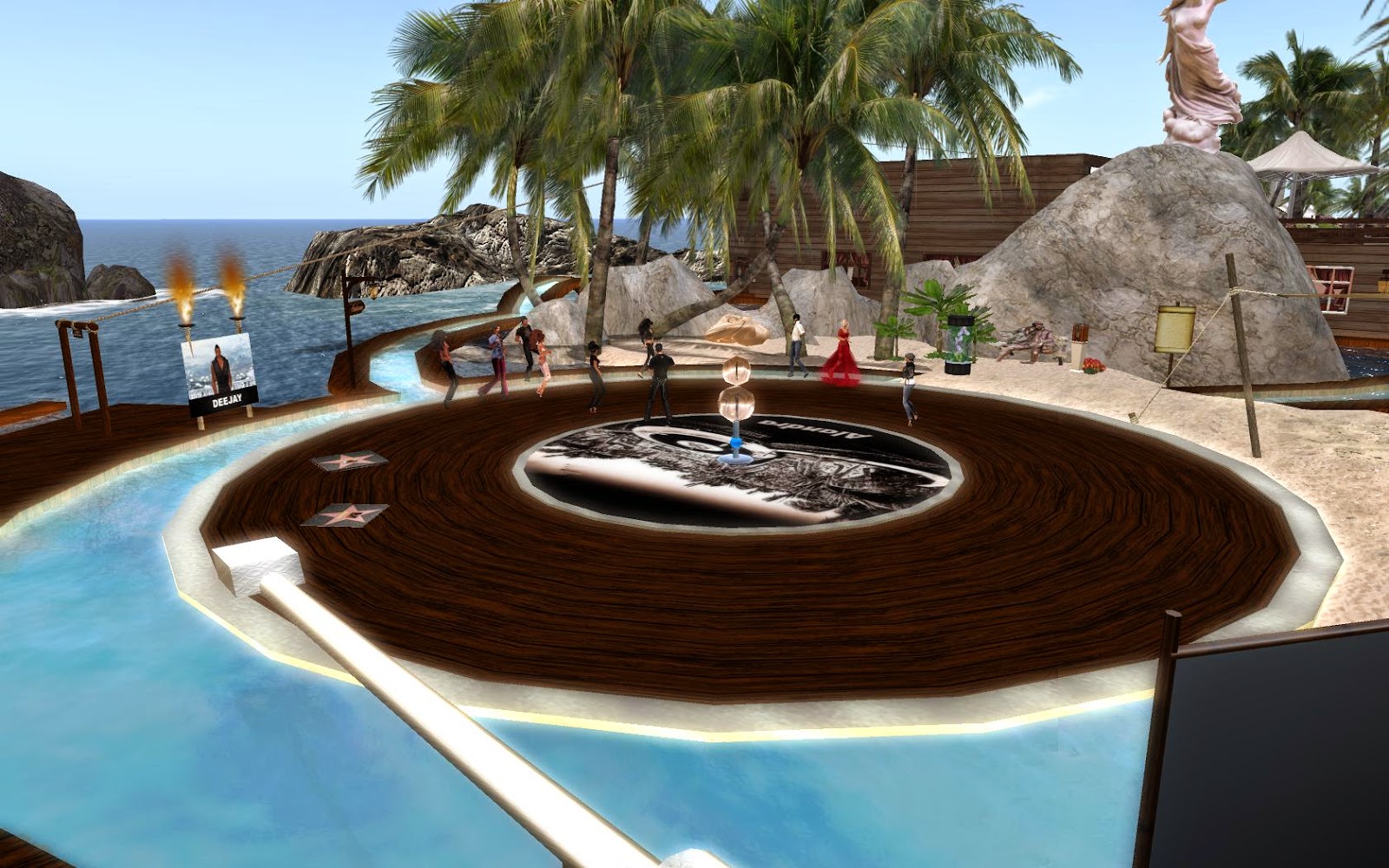 There are live DJs playing most of the time and they usually take song requests. The music played in the club is mostly oldies and the 80s. This is a 100% Dutch club, so the language spoken is Dutch.
The club only uses group notifications as a form of communication for their members inworld. But they have a Facebook page as well where readers can find more information and view photos of the theme events.
The club is part of a sim where there are many things to do on a number of beach islands, although I have just visited the club itself for now.
Here’s a list of the evening theme events that will take place in Alandra in 2015 : 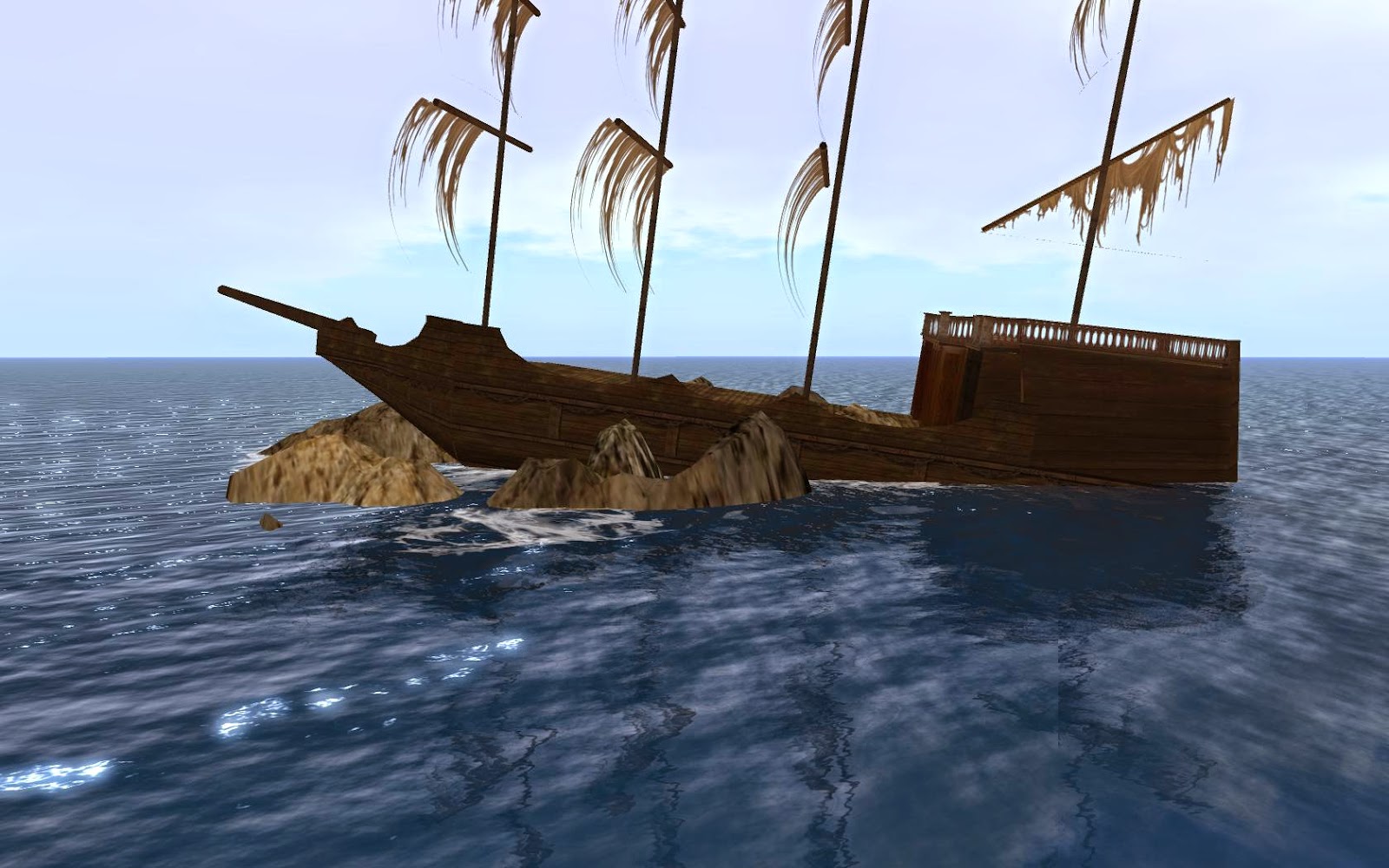 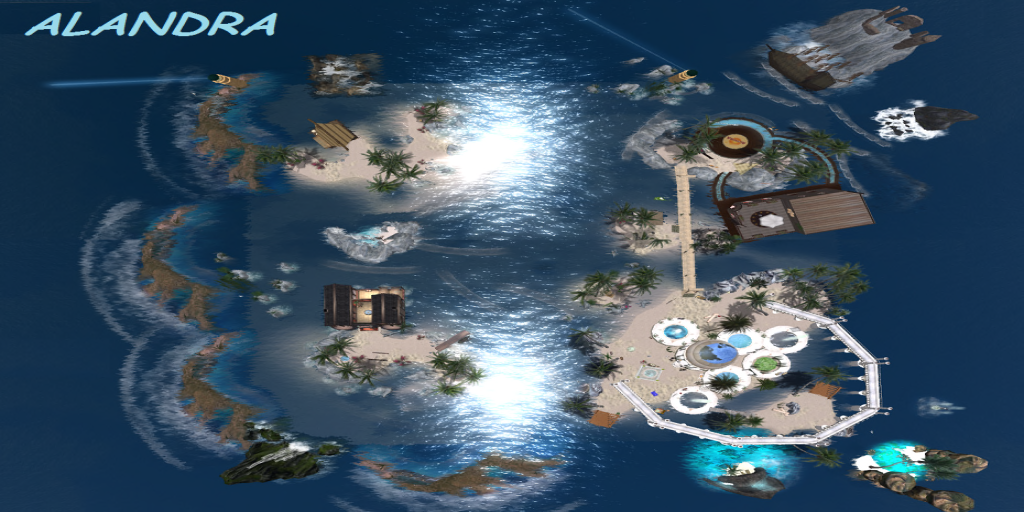 Personally, I think this place is special because of the unique dancefloor they created. Another club to add to my list ( just kidding, I don’t have a list ).
So, If you are a Dutch speaking person reading this, we could meet in the club and have fun there !

You can visit this club at the following location :
http://maps.secondlife.com/secondlife/TierraSanta/57/201/22

Wesley Regenbogen
Posted by Bixyl Shuftan at 6:30 AM No comments: