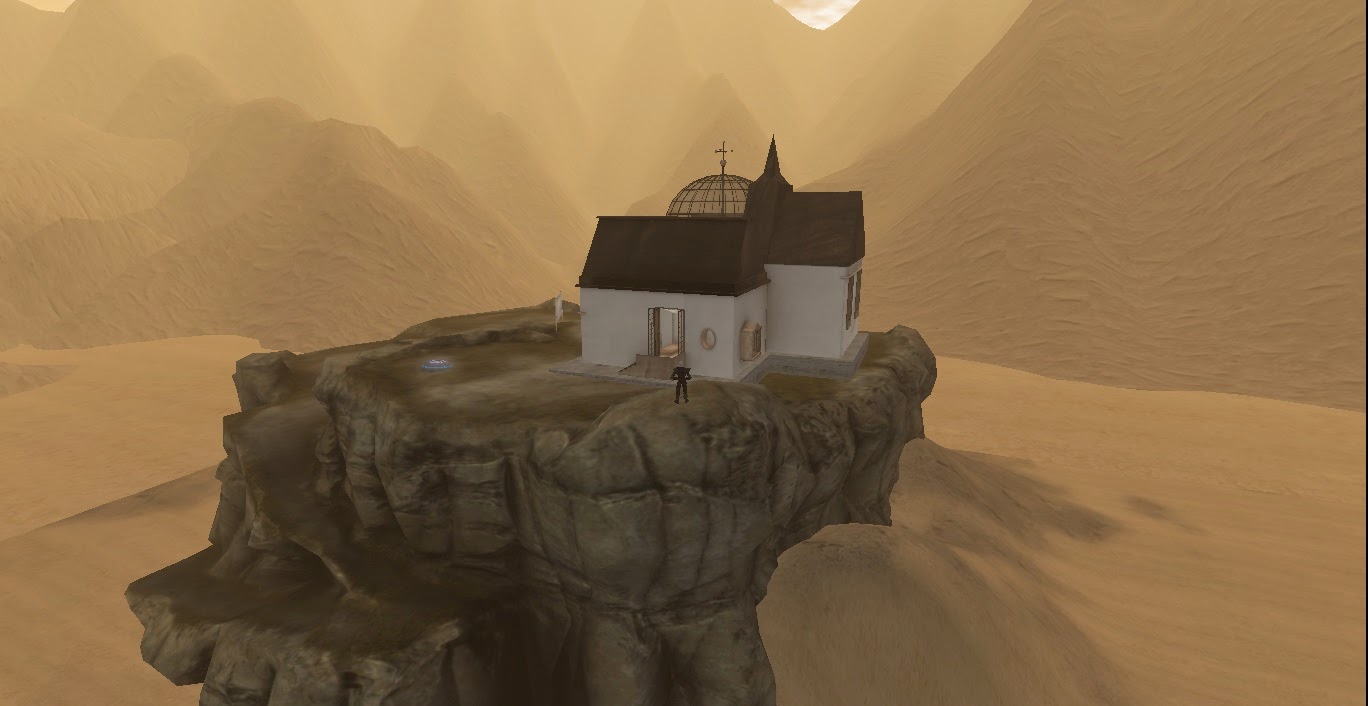 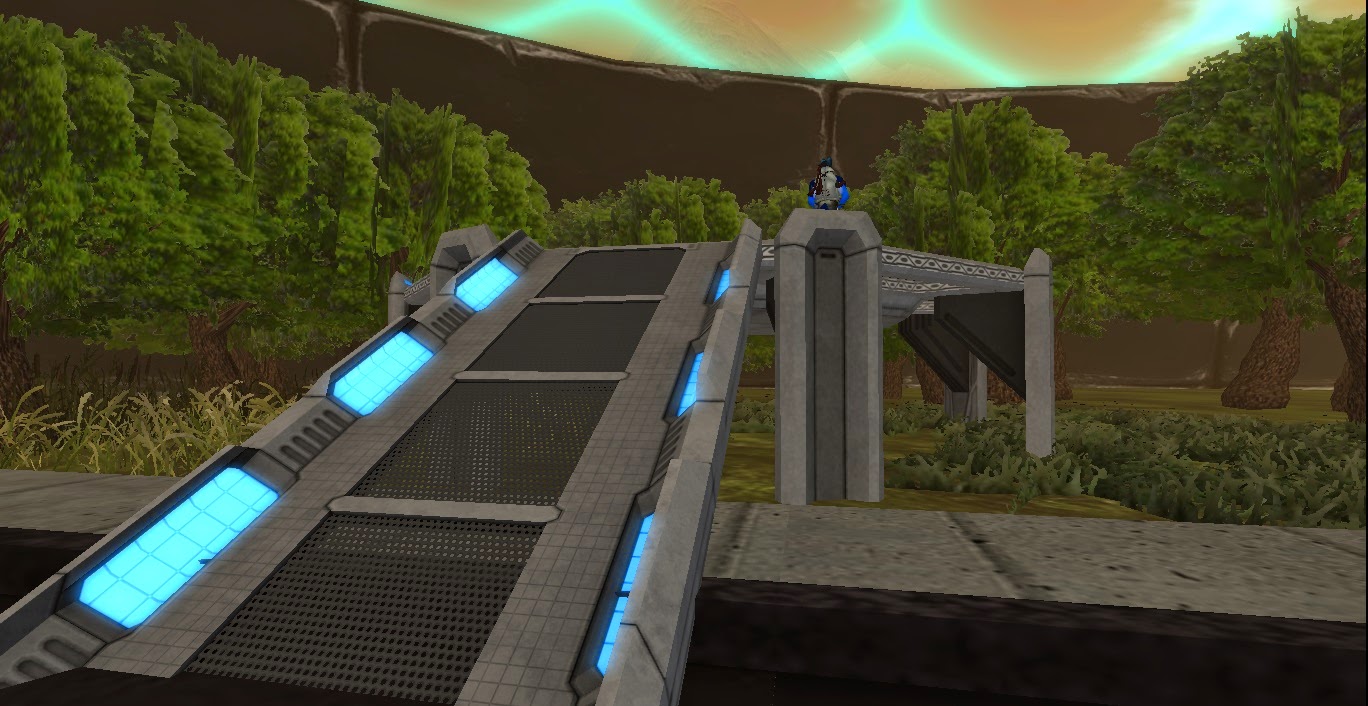 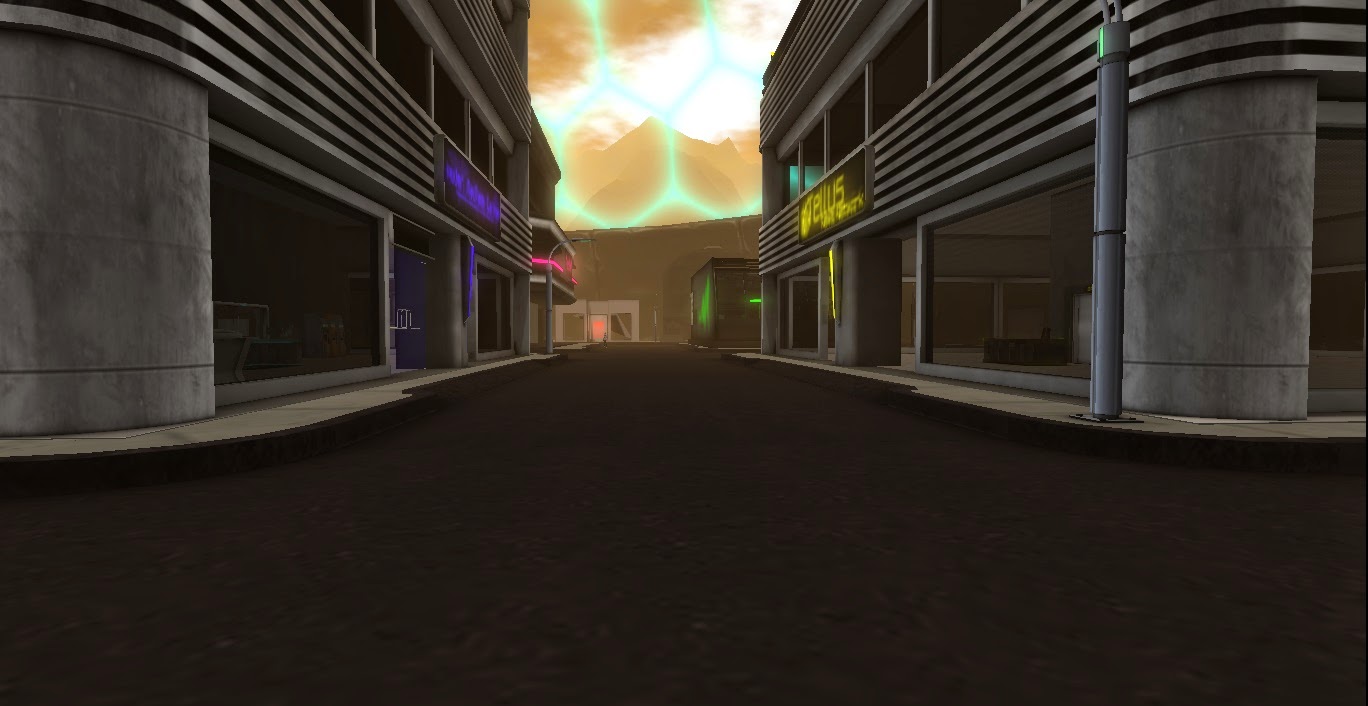 Land of the Giants

Since I wrote about the Greenies Tribute in LEA ( http://slnewser.blogspot.com/2014/04/greenies-tribute-at-lea.html ) and loved their house so much my editor gave me an assignment to go see another huge home. It is the Land of the Giants and is a wondrous build. Arriving at the house was an event. I was greeted by 'Papparazi’ taking my picture. 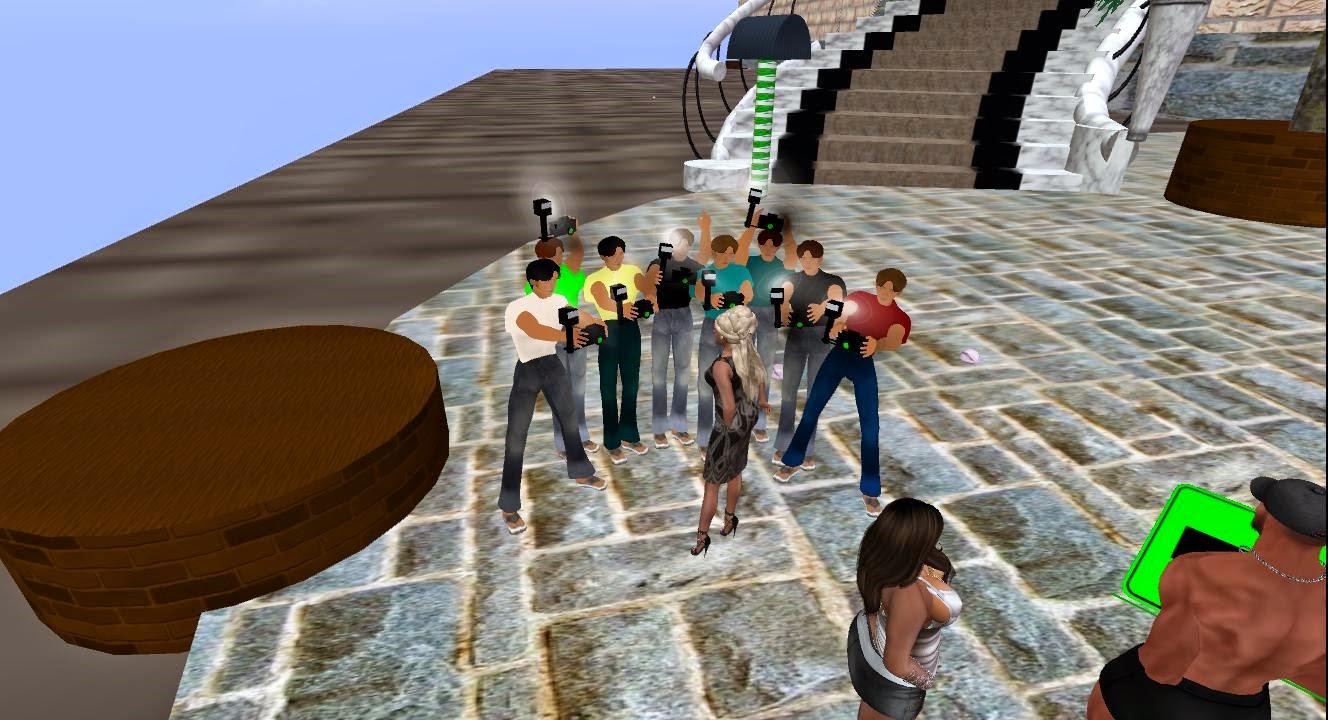 I entered the house, passing by some giant visitors waiting for entry,  and found a horse carriage with a driver waiting to take me around so I hopped in and took the tour. It is a house of numerous rooms filled with giant furniture, appliances and people. I was surprised because I thought they would not be home but there they were, so occupied they did not see all the tiny avatars like little insects,  exploring their dwelling. After I took the guided tour, I hopped off and walked and flew through the various rooms examining everything there. It is evident the creator also loved the Greenies. 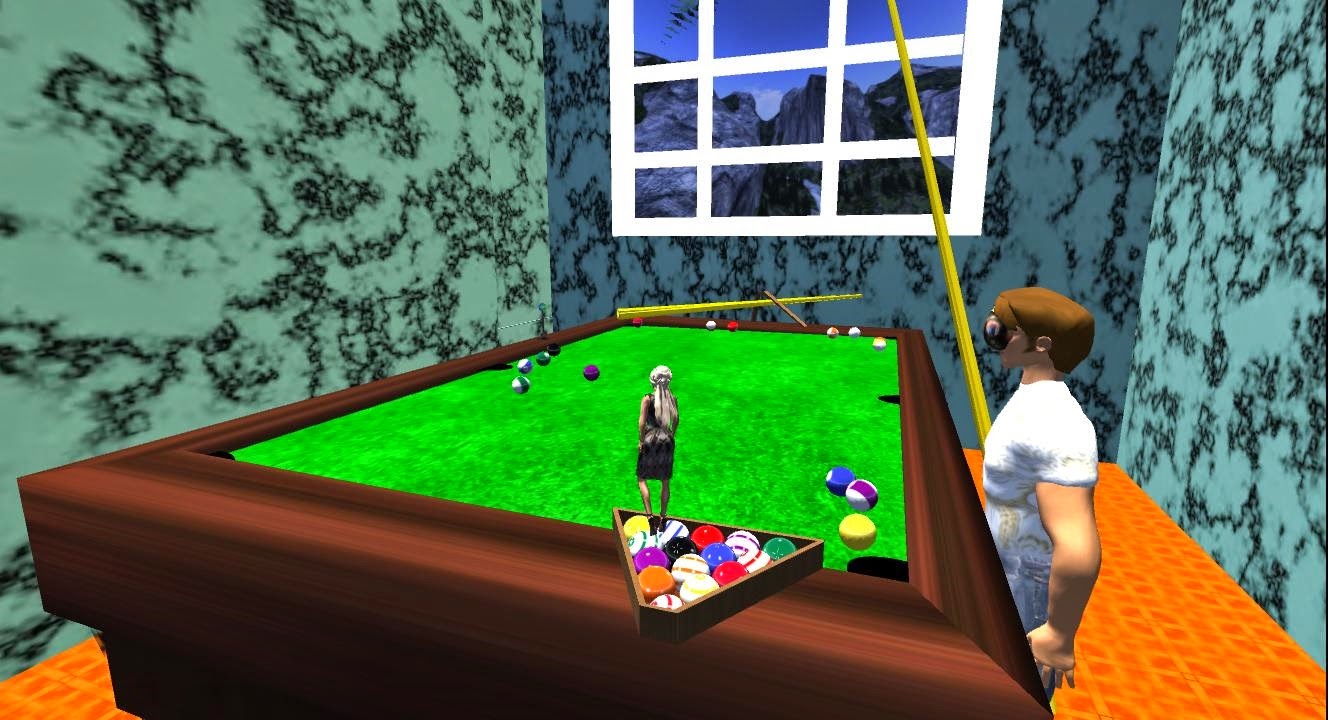 I learned the owner has SL children and that they are secreted in this house in their own living spaces, well hidden from the giant family but can be found scattered in various areas of the home. The kids are decorating their own areas to each taste. Randy Burt, the creator told me, “Along with the Giant's house I had to find places for my 8 SL kids.  So they have hidden rooms inside the big house, a leprechaun is usually around the secret doorways so people can explore.  The kids are making them themed, some are just rooms with their stuff, others are a mouse hole with Tom and Jerry things inside, one is a superhero theme, one is a bowling alley, one is Alice's tea party, all hidden, but open to everyone.” 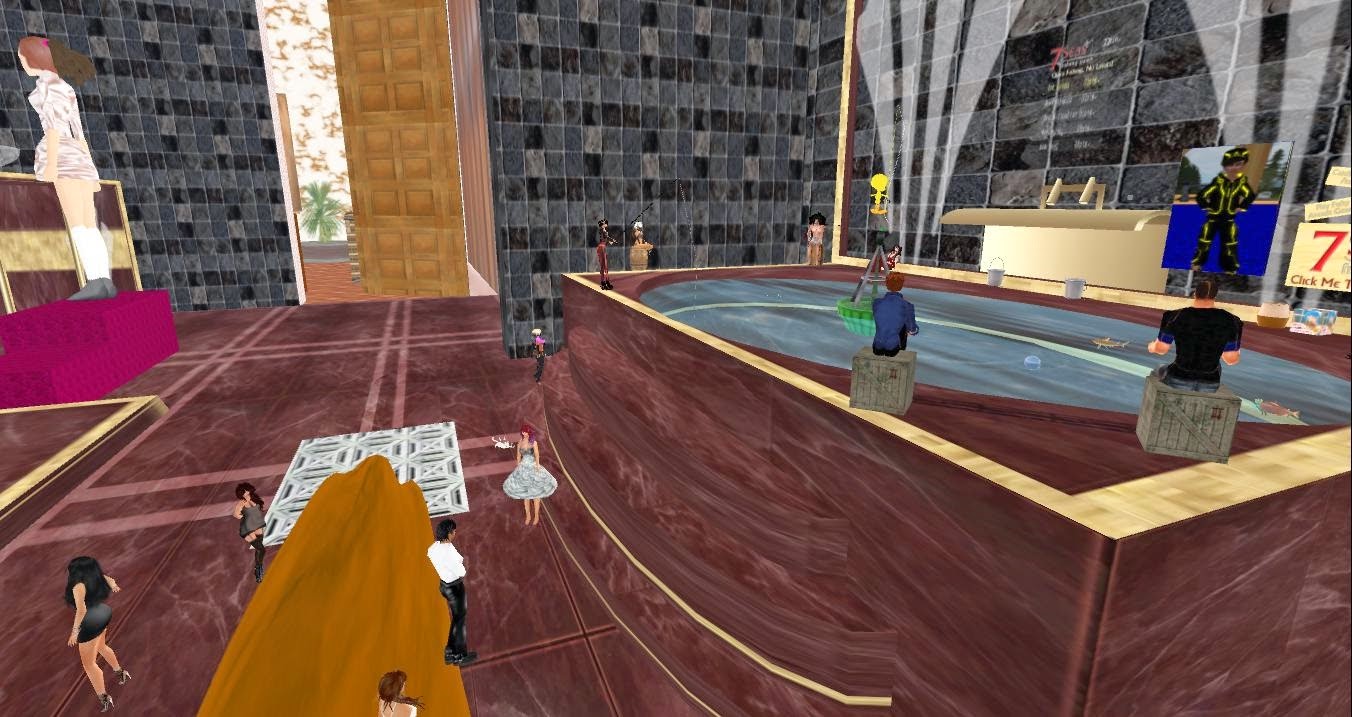 I was able to visit  several of their rooms scattered behind walls and perched high enough so they are not visible to the inhabitants. The bathtub has 7seas fishing and was happy to see that and one of the kids, Adam, hosted a contest for us.  I came across  a sign for a bubble ride in the giant kids playroom and took the ride. It is a long tumbling ride that goes for a while . At one point I found my self in a giant pinball machine surrounded by pictures of Superman! It is a fun ride but make a landmark there and go back after your tour of all the activities and hidden fun. Try the carnival rides in the child’s playroom. There are great bumper cars to rezz. 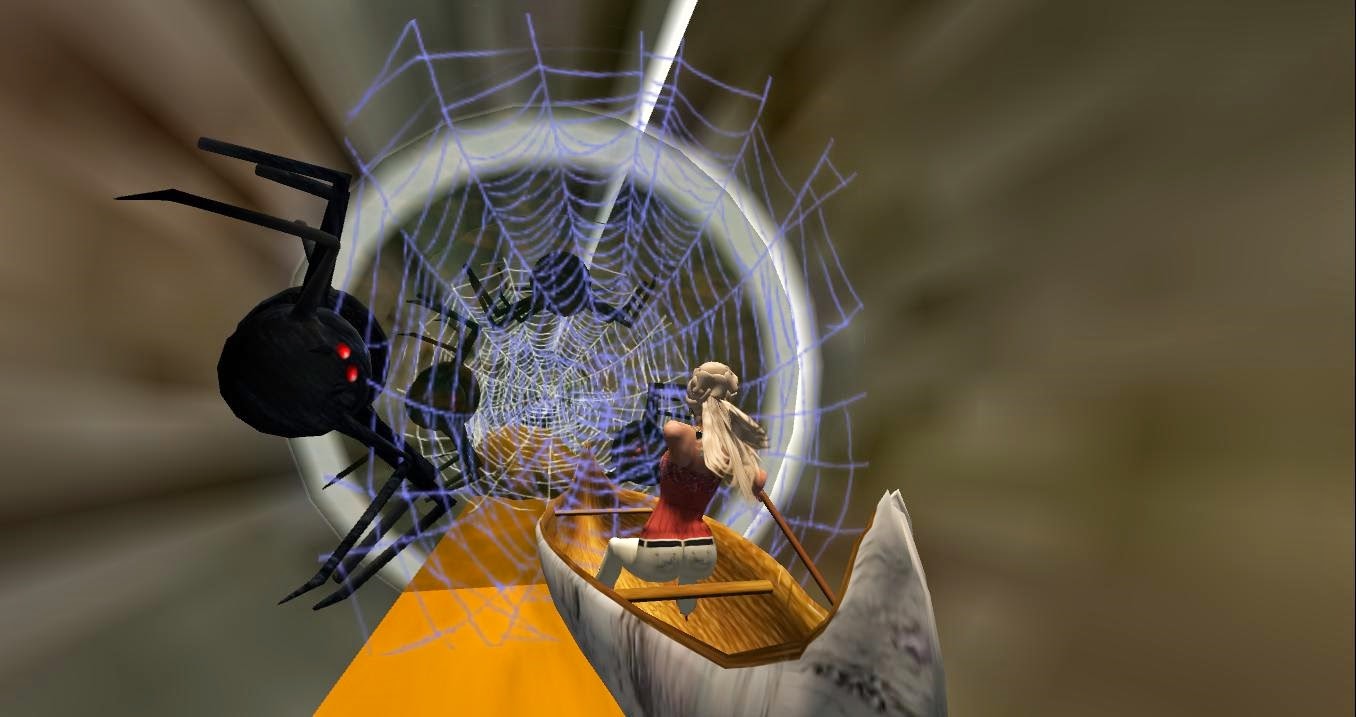 In the kitchen, I hopped in a canoe for a ride on a stream made from a spilled giant soda bottle, and ended up in the pipes below the house. They were full of scary creatures, bugs and spiders and other nasty creatures, but I got out alive . I found another SL kids room and took a short nap after that trial.

I discovered a TP to a maze and off I went. The maze is a temptation of goodies, every type of candy you can imagine lines the walls causing salivation with every step. There is an option to time your movement there to see how long it takes you. I chose no timing.
Next to the maze I found that there is an event every Sunday at 6:00 PM SL time .... a demolition derby with linden prizes! Sounds like great fun but too late for me! I know there are more surprises there and I have not told you about them all.  I am still looking for the bowling alley.  Plan to spend some time in the house or to come back more than once.
http://maps.secondlife.com/secondlife/Random/126/248/4000

Editors Note: The Demo Derby and candy maze are run by the Creations for Parkinson's group. The group's leader Barbie Alchemi, whom with her RL mother Fran Serenade and friends can be found at the derby every Sunday when it takes place.

*Update* Barbie stated that the builder of the maze is Almostthere Inventor, whom also hosts the Demo Derby.
Posted by Bixyl Shuftan at 6:00 AM 1 comment: 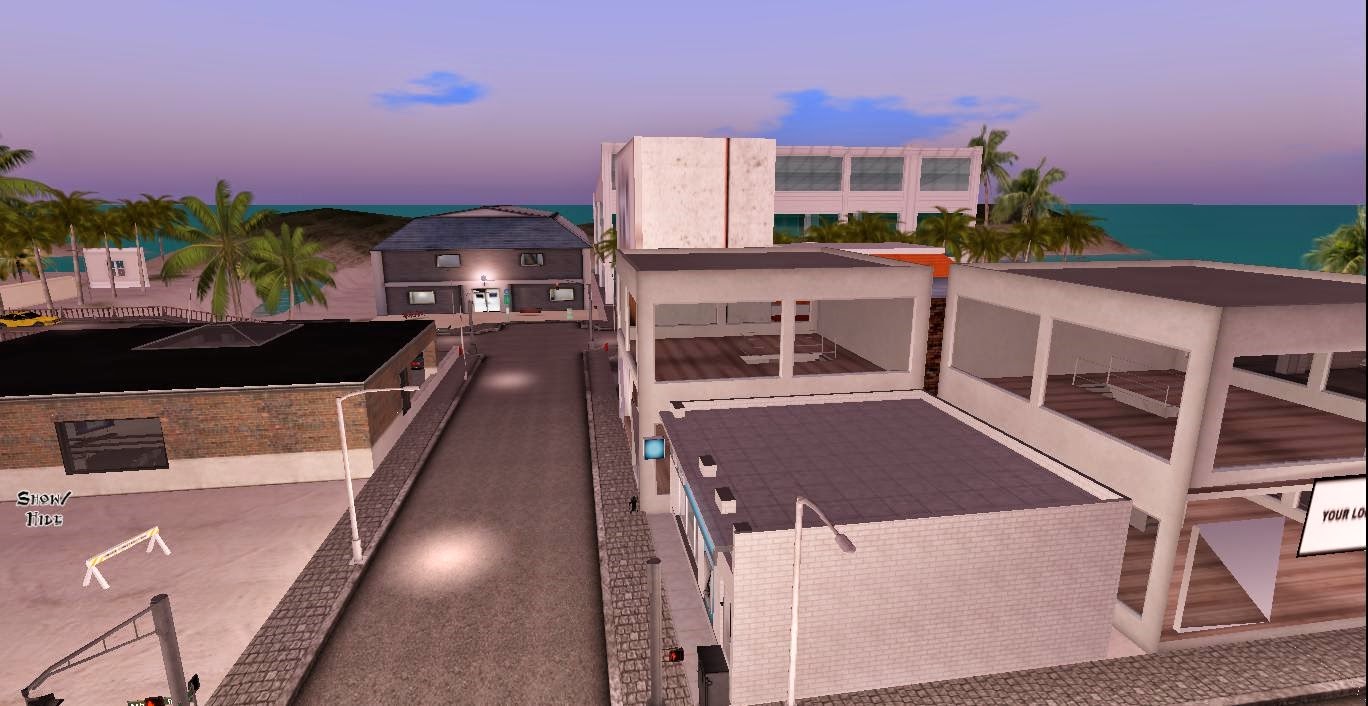 From the quiet sim of Cedar Creek, which tragically isn't around anymore, the new sim of Palm Springs arose. From the people who gave you Fairhaven, and Cedar Creek, this sim is a quaint little town that looks larger than it really is.

The sim boasts a Fire Station, a Police Station, A bar, a beach, a nude beach, and even a gated community, making it one of a kind. It is run by people who are very good friends of mine, and allow just about anything.

Of course, that doesn't mean a giant dragon has any business being here. However, they allow furries, and even child avatars (with supervision), meaning they are laid back when it comes to reality. This isn't a bad thing, however, as it simply means they understand that there is always a human on the other side of that screen. 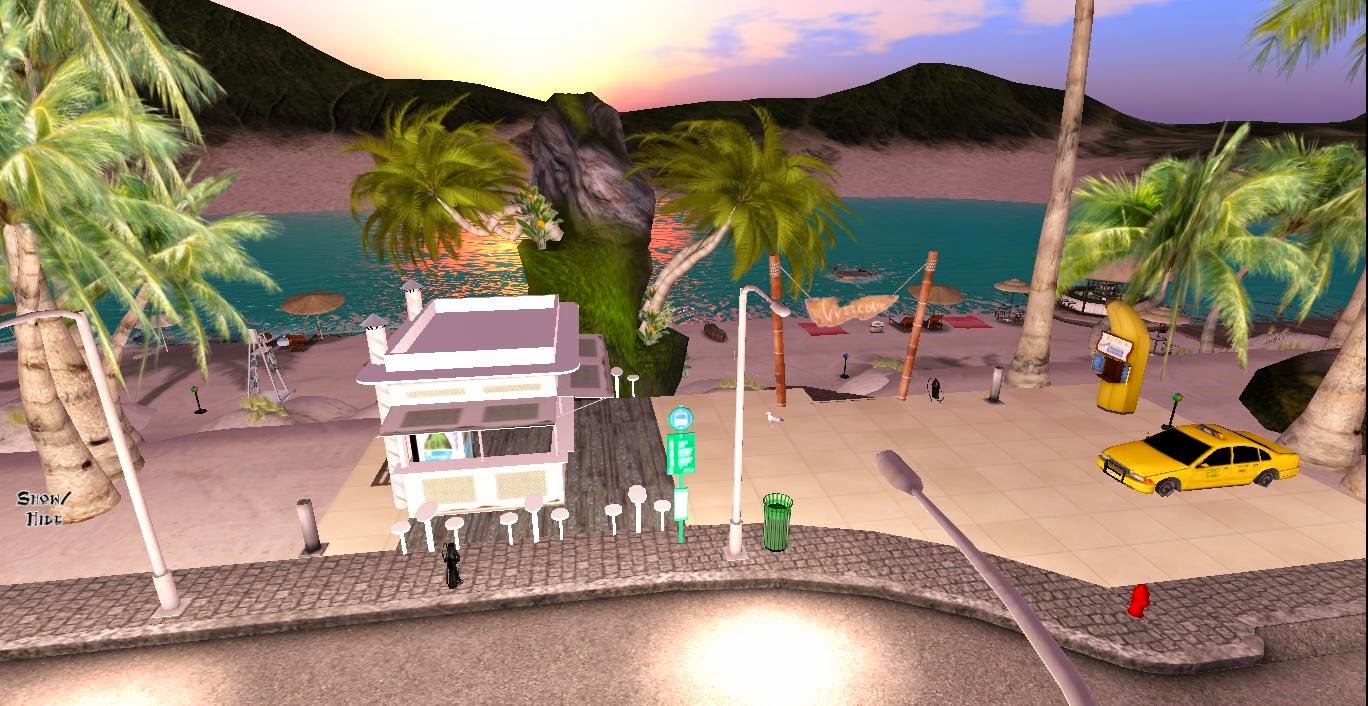 I have been with these sims, since they started with Fairhaven, and have been in love with the sims ever since. To any of you looking for a place to rp, come here, you'll have a great time, I guarantee it.

Theonlyjohnny Resident
Posted by Bixyl Shuftan at 4:00 PM No comments:


One of my favorite things to do in both RL and SL is to visit museums.   I recently found a unique one here in SL, The Clock Museum, located at Triglav (104, 32, 75).  There are over 100 clocks in every size, shape and type in the beautiful stone building and surrounding gardens.   The Museum is a tribute to the creativity of SL residents as well as the generosity of the site’s owners, Selador Cellardoor, elisha Zamin, and Doll Ulysses. 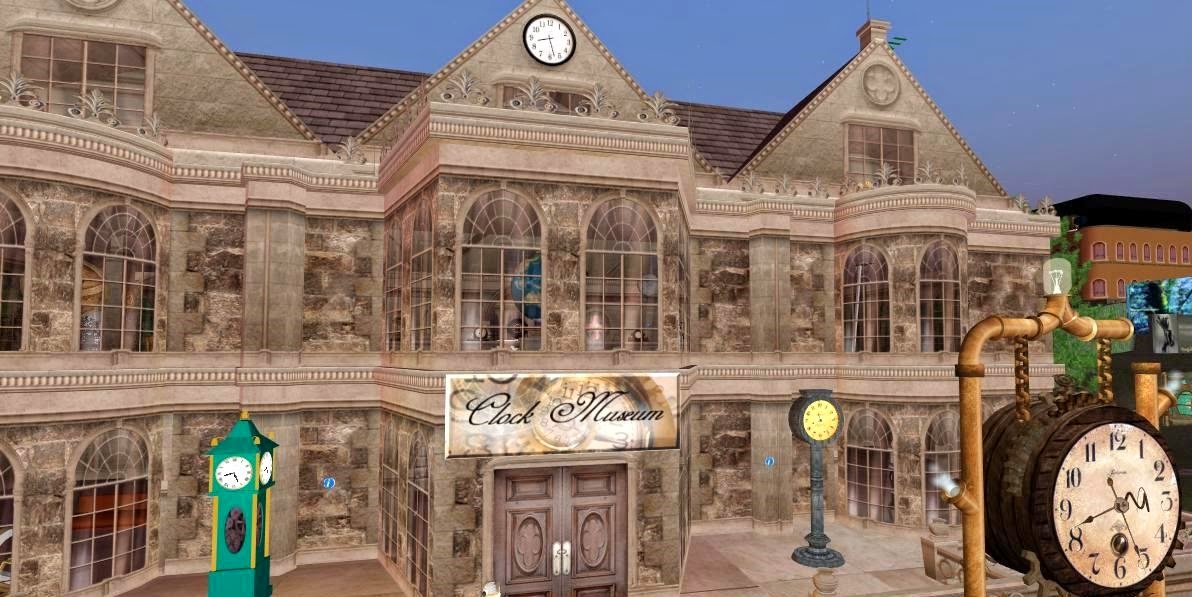 The three owners are all long-time residents of SL.  Selador Cellardoor has been a resident since 2003, and Zamin and Ulysses since 2006.   Their Museum is free and non-commercial.   They even have a few freebies, including clock patterned clothing, for visitors to take as souvenirs.
The variety of clocks is impressive.    Some are tall and massive.   Others are small and dainty.  There are Victorian and early American reproductions that are very detailed and historic.    Many of the clocks are imaginative and fanciful.  The styles range from antique to modern to futuristic.   Lots of steampunk ones, too.    At least two clocks are powered by water wheels.  One of them was inspired by a RL French clock from the 19th century.   Notecards are placed beside each clock so that visitors can take a landmark to the clock maker’s shop for more information or to purchase. 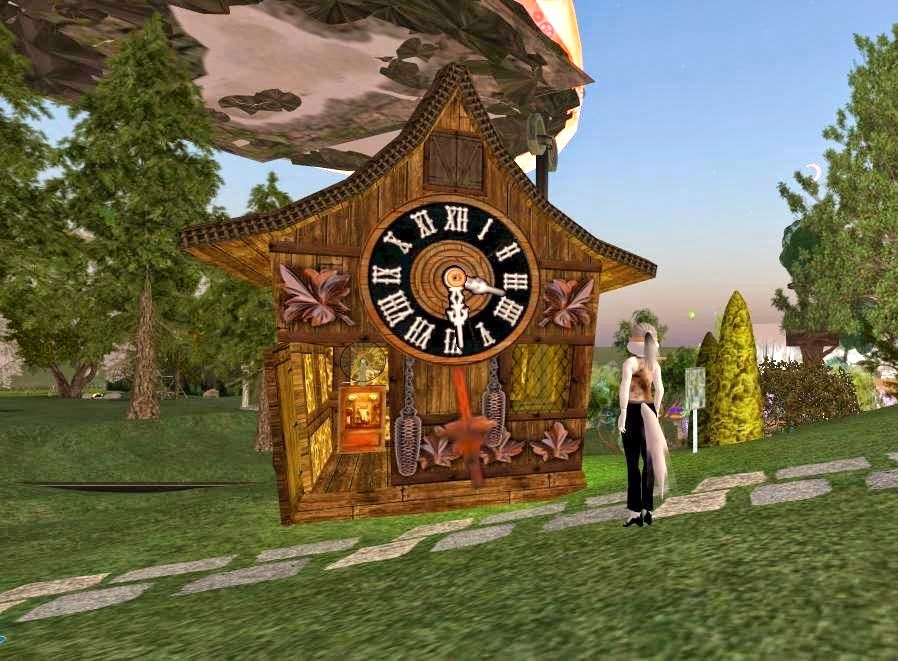 My favorite clock is one that does more than just tell time.  It is a clock house that is powered by a gerbil on a wheel.   It is located in the garden and well worth the short walk to see it.    In addition to the clocks, the garden has a picnic table, dance pavilion, a maze, and plenty of benches where friends can meet for quiet conversation.
I visited the Museum twice in order to see all of the clocks.  In addition to being visual treats, most of the clocks make beautiful sounds.   The sounds vary with each clock and provide a soothing background.    The Steampunk clocks hiss and vent steam, too, so be careful to not get too close.     In the entrance is a modern clock that shows that time doesn’t fly—it falls.   With each changing minute the old numerals fall to the floor and are replaced by the current ones. 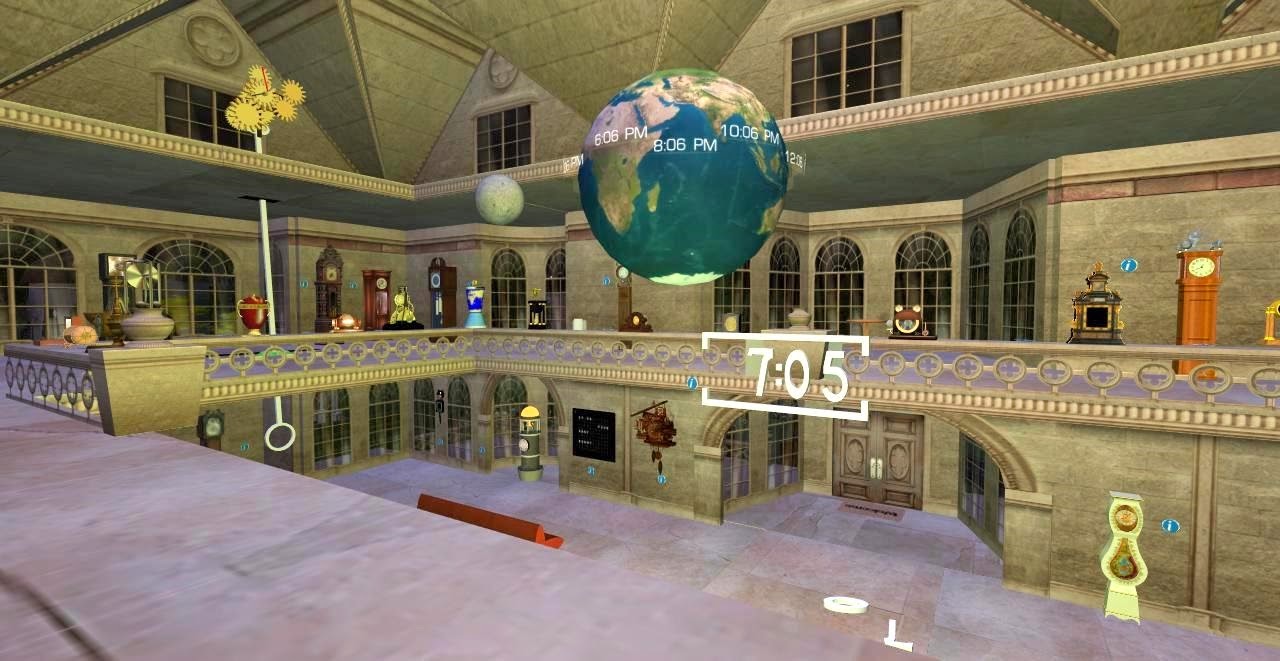 As you stroll through the Museum, make sure you turn your sound up so you can hear the clocks.  Plan to stay long enough for the hour to change, too.    On my second visit the time changed to 3:00 p.m.    What a great surprise!    All at once the Museum filled with the sound of coo coo’s, chimes, whistles, bells, music, and more.    It was amazing.
The Clock Museum is a hidden gem in SL.    A visit won’t take much time, but the pleasant memory will last forever

Grey Lupindo
Posted by Bixyl Shuftan at 6:00 AM No comments: