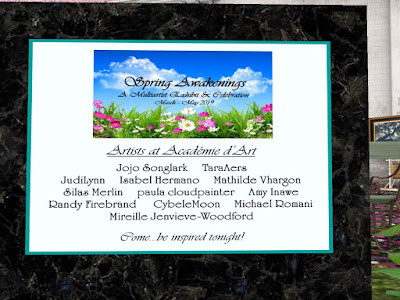 Ce Soir sent out a notice that there is a new exhibit with a variety of artists showing their works. As usual I missed the opening party but went over to see the exhibit. It was my first time in the sim so I spent time wandering around looking structures all over the region. It is a delightful region where  there is so much art in many forms . 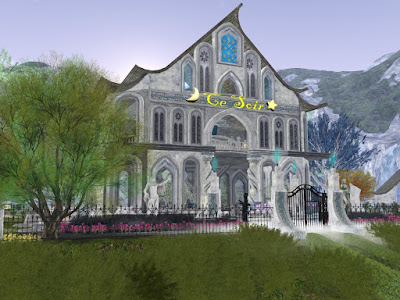 The builds range from small enclosures just for relaxing and chatting to a lovely large chateau for events and outdoor parcels for smaller events. As you wander hop into a scene on one of the interactive structures for pictures if you like.

From their website , for this time of year ...“ The spring season is our primary inspiration, but artists have been invited to explore the meaning of AWAKENINGS for themselves. What inspires, what moves the spirit? What opens the mind and broadens the horizons? What shakes one free from the doldrums that sometimes come from a long winter - or other darker time? Consider all - and express it artistically, using a range of media. Enjoy SPRING AWAKENINGS at Ce Soir Arts! “ 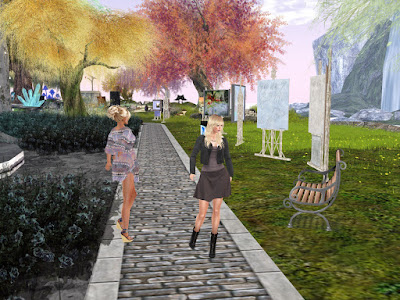 The list of exhibitors is extensive but notecards about the artist can be found near their particular exhibit. I recognized some of them but found  newer artists that I have not seen exhibiting. I counted 22 artists  showing so it is well worth a long walk around the pleasant paths.  I found two machinima links along the road , one very thougthful by my friend Secret Rage that you can see here .

I was having trouble with that one and Mimi (MimiMusette Resident), an assistant on the sim came to help. Don’t miss the lovely poetry as you move along the trails. There will be much to see on your walk. 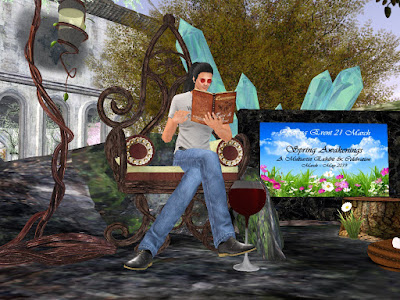 While I was in the sim there was an event going on at the Magic Tree Reading spot where RUSSELL EPONYM, Poet Laureate of the sim and  the “ Music Whisperer”, was entertaining the group with his music , most of which are story songs , many of his own. 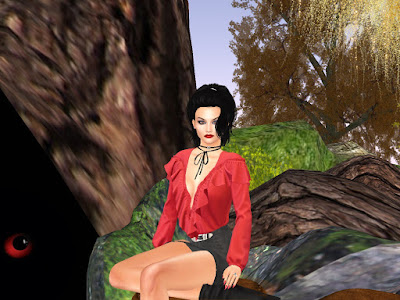 The owner of the sim, Mirielle Jenvieve, was hosting. You will see some of her lovely art around the sim. She is responsible for all the beauty you can enjoy in the sim. There is  no group to join but there is a subscribo near the Magic Tree Reading Spot . You will land there . I shall be returning.

Gemma Cleanslate
Posted by Bixyl Shuftan at 6:00 AM 1 comment:

Interviewing Jasmine Dawn And Nydia Tungsten About The Happy Vixen 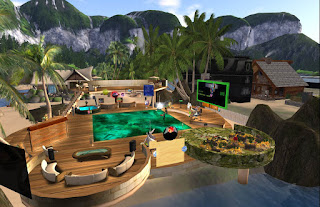 The Happy Vixen is the beach club of the Sunweaver community, as well as for the group of the owner's friends, Nydia's Angels. It is owned by Nydia Tungsten and managed by both Snowbuns (Skylark Lefavre) and the Newser's own Bixyl Shuftan. Recently, the club was remodeled, and the job fell to Jasmine Dawn (Orasine), whom also has done a few Halloween builds for the club. I met up with Jasmine to talk to her about the club.

Jasmine described her position at the Happy Vixen, “As security and as it's builder. I help as needed and when something needs tweaked.” 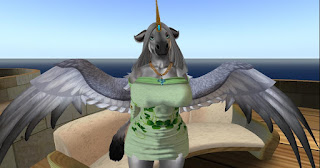 I was wondering how long Jasmine has been part of the Happy Vixen Club.  “Oh for years, this club used to be over where the Redfoxx clan is now and it started out as a work in progress place.” said Jasmine.  “Orginaly it was a covered dock side club, very small place.  Nydia Tungsten wanted something bigger.”

I asked Jasmine about the new Happy Vixen Club that we were sitting on. “This place?" she said, "It originally was a club set on another sim that Nydia controls. Very little traffic there. But it had potential for a great open air type club.  I seen it and felt it a shame the design wasn't being used as much it should. The question came up about a rebuild and this place (in the other place) was the first idea of many I had.  It offered more room for the patrons, seating and followed suit in the beach theme. There is still things that needs be done for the reopening tomorrow evening (March 17).  I still need work on a spot for Geerkil to sit when he is here.  Geerkil, if you didn't know, is a giant Seawolf type dragon.” Geerkil's large body means he takes up more room than other DJs. 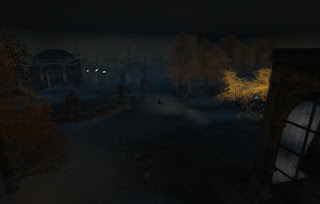 My next question was would Jasmine continue being with the Happy Vixen for a long time.  “For as long as I am needed, " Jasmine replied, "Or till management can find someone better.”

While Jasmine and I were talking, club owner Nydia Tungsten came along.  I invited her to join in the interview.

I asked Jasmine what inspires her to build an amazing club like the Happy Vixen.  “Well, I do it for the people," she replied, " I see people sitting around, nothing to do really or really no place to hang out at. I like giving things that occupy their time and when it is here at a place I've helped with.  It makes it better.  I've done many things as events in the past, did the haunted Halloween maze and the haunted house.  Everyone really enjoyed the haunted maze and the woods style club area.” 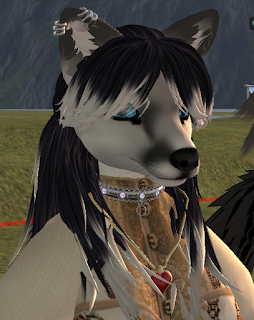 I asked Nydia about her role in the The Happy Vixen Club. She replied,  “Well... I own THV and created it for alternate days for the space club.”

My next question to her was how long has she been an owner of The Happy Vixen Club.  “Since it was created," She answered, “Well the first one was VERY simple but popular build.  But that one was build by my friend Treminari.”

I asked Nydia how long would she continue to be the owner of The Happy Vixen Club.  She replied, “As long as I can.”

I told Jasmine that I think she did a remarkable job on the particular build.  “I always try to put my best foot, hoof, forward in my builds.” she said, “I'm always about, mostly hamming it up with friends but like now, I'm wondering what I am missing.”

You can go to The Happy Vixen Club at: 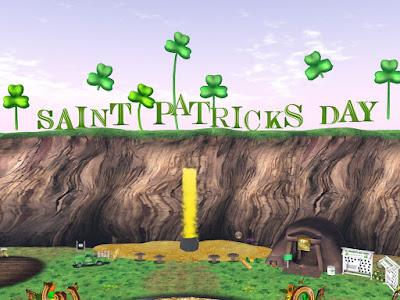 I already see people dressed in their green finery with top hats for St. Patrick’s Day. Shamrocks are floating around the grid and the day is not til the 17th of March.  Not only the Irish celebrate that day in Ireland but people all over the world  join in the fun for one day and assume being Irish. 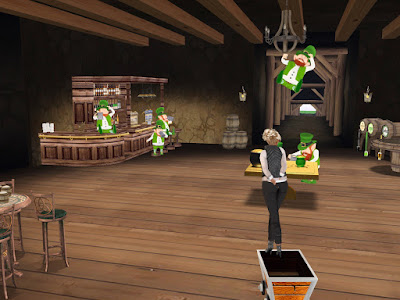 Second Life is no different. Laura Liberty of Townies has gone all the way with a marvelous sim chuck full of Irish fun and music. While her Mardi Gras street was open for dancing and shopping she was busy building the venue . I peeked in and saw the progress and  now it is open for you to visit and enjoy. 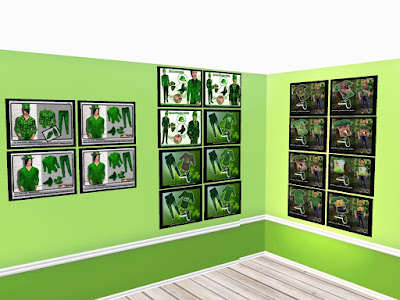 There is a whole building of outfits for both women and men from toes to top of the head. I controlled myself tho I did get one outfit. The ones I saved from last year seem to have disappeared. I also bought a shamrock  necklace and earrings. 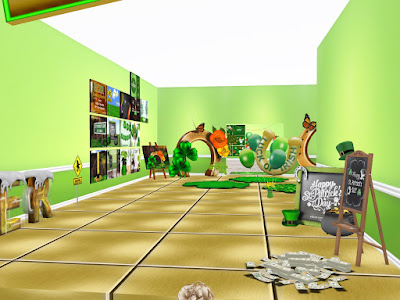 Another building carries the latest in decor for your sim , club or home. Shamrocks, lots of  balloons, arches,  and of course Leprechauns, and delicious buffets filled with good Irish food and drink.  Make your own card is available too! 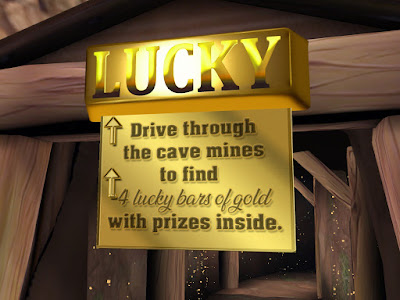 Instead of a tunnel of love or scary ride through, there is a gold hunt in a tunnel. Rezz a little mining car and make your way through looking for gold bars that the leprechauns evidently dropped. Of course stop off for a drink or two at the bar deep in the hill but watch for that gold!! There is mining going on all the time. Prizes are in the bars. 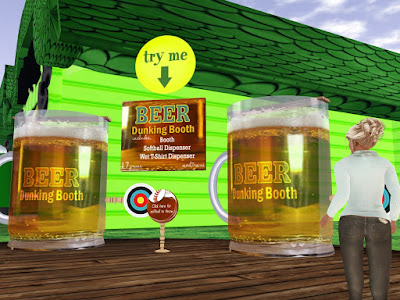 At the foot of the rainbow mountain gold coins lie in a pool and  fly and you can too! Check it out.  HA. As you walk by try out the Irish jig dance balls. I was dancing to “Flogging Molly - Drunken Lullabies” so enable music! After that adventure wander over to the beer dunking game. Hope your aim is good, and you need a friend(victim) with you . 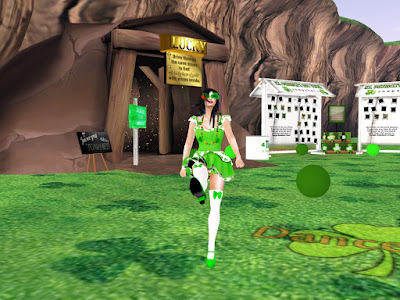 I ran into my friend tina (tanyja Resident), a manager in Townies sims dancing the jig and watching the fun. Don’t miss it while it is open. Thanks Laura!

Gemma Cleanslate
Posted by Bixyl Shuftan at 6:00 AM 5 comments: