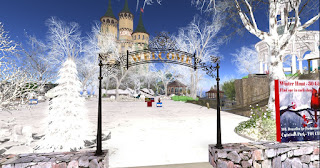 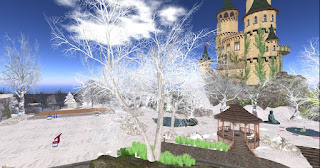 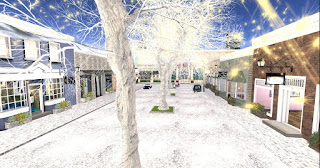 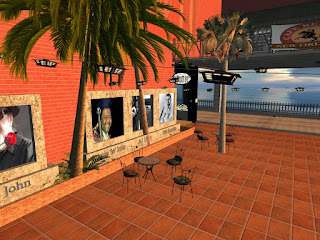 A few more places are celebrating Mardi Gras in Second Life. Laura Liberty has opened her famous Mardi Gras Town. Go listen to the Zydeco  and Blues music of Louisiana in the street. Grab a hula hoop and have some fun! Any needs you have for decor you can find in the town shops. I saw some great masks and outfits too.


From Mardi Gras Town it is an easy tp over to Valentine Town from the street. I always take time to visit that too! The Love Buggy will take you and your honey on a sweet ride all around the town  with some visual surprises . Try it! Loads of valentine decor, outfits, and accessories are available in the stores. Townies (129/168/7) 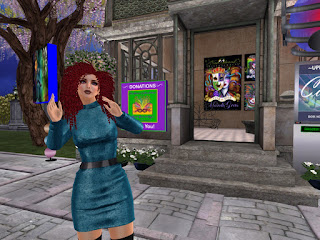 Cay’s at Woodland Lake is really celebrating this fun holiday before the quiet. The sim is decorated for the event and there are parties every night and sometimes day! DJ Messalina was spinning tunes when I stopped over at an early party. I took a walk around town admiring the banners and other decor . The French Marketplace was fun to visit , showing the foods of New Orleans. The King Cake is a special delight at this time of year. I grabbed a piece  and a fork and had a wonderful taste. There is a subscribo on the wall in town to receive notices of events. I saw some notices around town that there may be some changes coming after Mardi Gras so don’t miss it now. 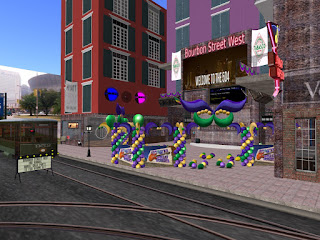 The Plaza at Bourbon Street West is worth a stop to view Mardi Gras decor.There is a Mardi Gras party planned here on the 13th at 8:00, so put it on your list if you are doing Mardi Gras hopping that day. I looked in at the Musical Legends Park there where you can pick up biographies of various musicians. Hop the train and take a ride through Bourbon Street.
http://maps.secondlife.com/secondlife/Zurich%20City/35/39/27

My last stop was most interesting. I visited a little gallery, the Sean Clancy Gallery, that houses marvelous photographs of the real New Orleans and south  Louisiana folks associated with Mardi Gras activities. "Mardi Gras Indians are Black Carnival revelers in New Orleans, Louisiana, who dress up for Mardi Gras in suits influenced by Native American ceremonial apparel.”

Some intriguing photos are here and I recommend a stop. There is some good music playing here too from New Orleans radio. 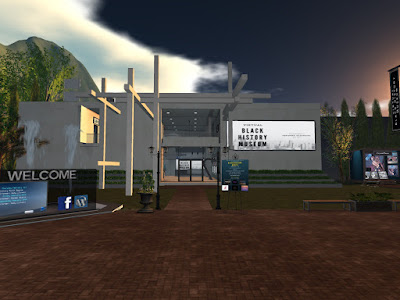 I am sorry to say I missed the grand opening of the Virtual Black History Museum in Second Life in December. I know the opening went very well with an original art exhibit featuring three photographers in the gallery and live performances and raffle prizes for attendee and an outdoor market. This will be a good time to write about the Museum though since February is the Black History month in the USA. 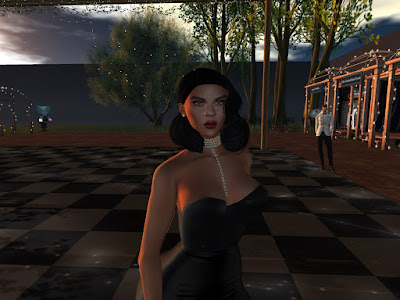 The museum is the brainchild of ßяια Ŏ (abriannaoceanside) with the partnership of  Broderick Logan (BroderickLogan Resident, fellow curator. Broderick  “handles  the arts and merchant side of things and is a huge part of the overall design” When I first met Bria back in November she told me, “We'll be highlighting key genres influenced by African American musicians and spotlighting some specific talents.” At that time there were pieces that were very reminiscent of New Orleans and Bria told me that it is a favorite place of hers musically. She attended a jazz fest there and it changed her life.of the museum she says “It's not just here to be informative, but hopefully progressive. It's already taught me that not only is the world filled with amazing people within the community, but also amazing allies that truly are an important element of the change our society needs. It's also going to be a place where we can celebrate and learn from EACH OTHER, which is just as important as paying respect to the journey that led us here. “ 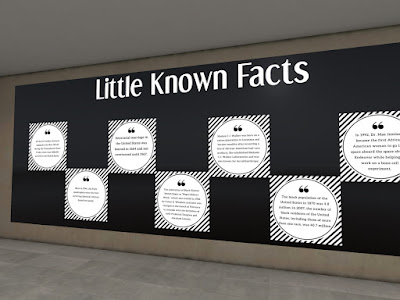 The modern museum building houses the history rooms and Time Line. The information is presented in a way that is easy to read and follow. The Time line begins with the founding of Jamestown and moving through the years of trial, suffering and triumphs for the African Americans to the present time.

In the other room there is a wall sharing current issues of the day that are actually remnants of the early years. The adjacent wall  has some really interesting little known facts to add to your education. 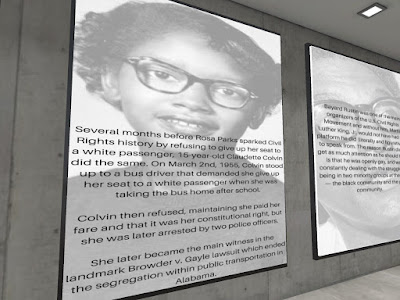 The next wall is a biography wall of some early black pioneers in various fields that have affected the country.

Upstairs is the gallery at this time showing works of by three artists, YukiOnna Senaki, Rya Santana, and Trish Claremont.  Be sure to walk through to see the eclectic collection while it is there . There are bio cards on each artist that share their visions.

Outside there is a plaza area with a charming cafe . I ran into my friend  Ciska, and we sat and had a drink. 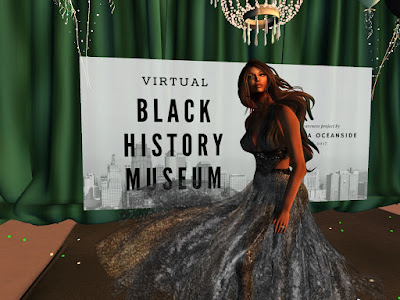 The opening event on February 1, featured the talented singer, Hedy Patrucci.  Her music was lovely and elegant and she took requests from the audience. It was the first time I have heard her and I was so impressed. During the month of February there will be many live events . When you visit check out the calendar at the entrance for more events or join the group to stay informed.

I hope you will have time to make a visit to this wonderful addition to sl and return often as the museum progresses and the Gallery changes.