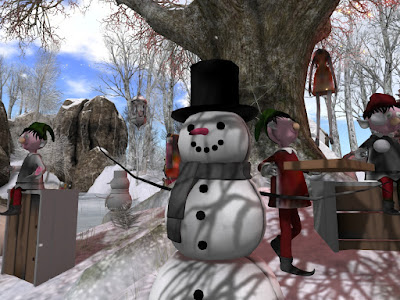 It seems so early to start visiting venues all ready for both winter  activities. sports and/ or Christmas. The problem is most of the sparkling winter areas disappear so soon after the Christmas season and I don’t want you to miss any opportunities. Those sites that will stay around for your winter pleasures I will save for later articles. I have already seen Santa sitting in on his throne, and in another sim standing with his reindeer, not sure which one.

Let’s start with shopping fairs and bazaars. We are all thinking decor for either our home and yards , clubs, or regions. Now it the time to go looking without angst. Why wait til the last minute? 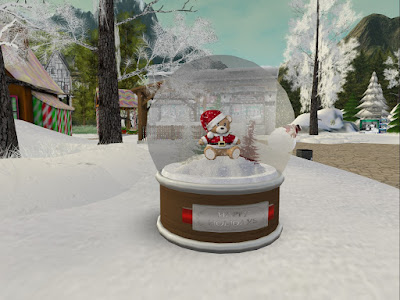 “Hello there and Welcome to Winter Wonderland Christmas Bazaar!  You are welcome to enjoy our winter setting by skating on our lake, playing on the rides or hang out in general just to shop but please be respectful of all other guests in the sim. Enjoy your visit and Happy Holidays!"

That says it all! This is another delightful winter bazaar. I like the decor here which is a winter scene with charming little shops spread around the area. I love the large  Snow globes that dot the landscape. If you are looking for skating snowmen I saw them there on the skating pond for sale. I found some sweet gift boxes to fill with gifts. 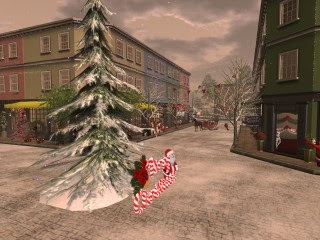 The Christmas Fair is decorated,  many village  shops open, trolley running and so much to see. Not all the shops and kiosks are filled yet but they will be. The skating pond is open with some smooth skate balls for your use. As soon as you land the tree catches your eye. The shops I stopped in had so many decorative items for sale.It was hard to resist.

Join the groups and get notices of the daily activities going on at the stage area. I saw some wonderful outfits in the shops and so many lovely trees , garlands, Christmas balls and other decor. I am glad I left my purse at home! But this is a good place to start if you are looking for goods. 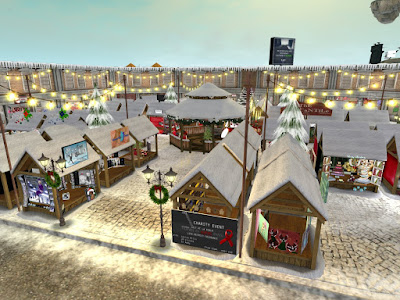 I love going to the markets that have kiosks because there is so much more there to look at and buy. At this Christmas Market 2017 the place is loaded with temptations! It is a nice compact place to shop and visit Santa  in his gazebo where you can sit and rest , or rezz a sled if you dare! 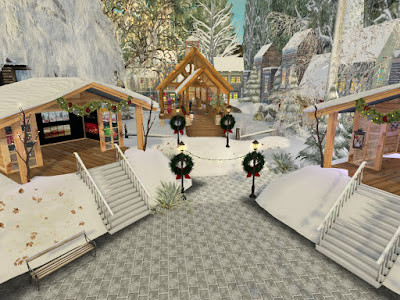 Magic Christmas Winter Wonderland was my next stop . There is a free saucer sled at the entrance and also free skates to grab. The little village is a good place to roam and listen to the music. The skating pond is set up with skate balls and I found a sled for one or three persons there too. This is a good stop to pick up some skis, skates, eggnog,,chocolate and just have fun. I rezzed a Santa saucer which took me down the hill. Enjoy the shopping break!

Looking Back at Furry Desires 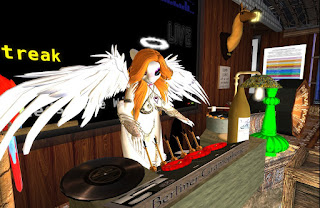 Skylark LeFavre is known in the Sunweaver/Angels community as both a DJ and the manager of the Happy Vixen Beach club. But before she joined up with them, early on in her time in Second Life: Furry Desires.

"First club I worked for before I had my own successful club (was) Ari Sen," Skylark explained to me, "I was a highly paid pink Kani pole dancer. The owners were DJs, and my friends. But drama from a patron divided the club. Now my ex-bosses and friends have their own club, 'Hearts of Gold,' the space phoenix steampunk club. Without them, I would not (have)  taken an interest and learned everything I know. They  set me on my course. The money poledancing then was good, like 10 to 15,000 Linden dollars. But it left me feeling empty. I needed more. I talked with a friend, and we started Furry Desires."

"This was back in early 2009. We were a hangout. We accepted furries, humans, nekos, pretty much anyone. We handled all griefers silently. The owner of the 'Scuzzie Fuzzies' avatars line did security. She also made the final club building. I was co owner and a hostess many loved, complimented about my notices after each event. We had a place for people to cuddle and sit. We had a floor for skating too. Our danceball was made from scratch, well, most things were. We had a smart dance ball. You had furries, humans, taurs, ferals, tinies, etc. The danceball would see what you were and it would choose the appropriate dance for you."

I asked about the danceball, and Skye talked about the person who made it, "Byrnt was a telecommunications programmer. when I ran and hosted events ... (he) made danceballs that networked with ours. This was literally the beginning of using things via UUID. Somehow it saw the kind of av you wore and selected poses meant for it. It never ever made a mistake."

Skye told me he ran into Brynt about three months before the opening of the club at the Isle of Wyrms. Another of the people there was Tsume Serapis, "a friend I met at Alchera Medieval RP. She was our DJ manager. Byrnt more or less set up the image of the club as it was to be run and I had a lot of people skills and kept everyone  happy  and wanting to come back. It was us and the DJs we hired. I did all of the hosting on top of managing." When they encountered a problem, "We ... thought on it and came up with new ways to handle it without letting anyone know. I was the one who delt with the Av vendor people. ... We also had a mall for other things Byrnt and others made. ... Furry Desires (also) had a penthouse suite."

"This did not happen overnight," Skye told me, "It took a lot of work and a lot of time. We were each doing more than one job. We came up with new ideas then thought on them on the best way to do them. Mind you back then there were no dance poles, no contest boards. We simply didn't need them. We were a family safe club, we didn't do nudity or sex, and we were a hangout. People came for fun times good  music and the company. The atmosphere was family oriented. No one ever talked abouty unhappy things. People back then knew what to keep out of places like ours."

The club went on for a while, but then trouble came, Skye explained that Byrnt, "had enough to retire on until his job was cut, and the house fire" after his home had already been damaged, "from Kirinia sucked up all he had. He moved to ******** with his parents and went on disability." For a time, the sim and club continued, "it went on for three months after he lost his job. How? Tips. A sim paid for by tips. You tell me that is not a mark of a  legend? In the end though, we closed it with intentions of reopening it when we could." 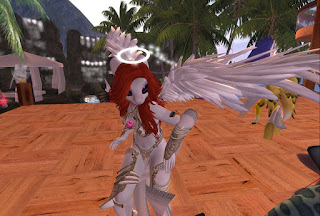 Skye did say it was "likely" the club would be back one day, "Byrnt came back to SL, said he had been  learning to do stuff to make things to sell to retore  Furry Desires, and wanted me to resume my place." But Skye felt if the club came back, it would be far from the same place, "Furry Desires was the best years I ever had on SL. Not a day goes by I don't miss what we had. I see what clubs are now, and there is just no way for us to adapt to what clubs are. Furry Desires coming back, (we) will have to make changes we don't want. No one comes (to clubs) for what we offered at Furry  Desires. ... What I want may never exist angain the way I loved and remember."

Besides The Happy Vixen, Skylark also DJs at the Eternal Desires club, and occasionally at Club Cutlass and Club Zero Gravity. But she never forgets the place she helped run years ago.