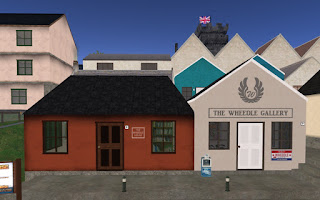 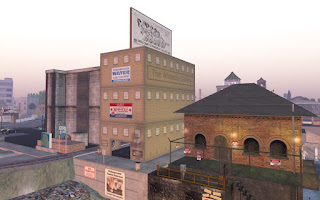 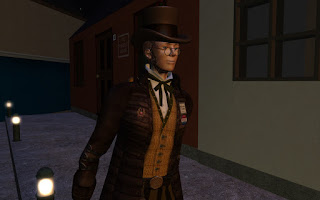 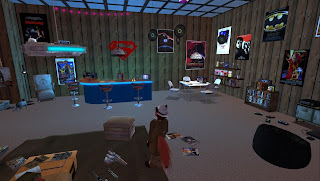 The movie "Ready Player One" a few months ago attracted attention from users of Second Life as it's main characters went about a highly developed virtual world. Although the movie wasn't the big hit that was hoped for, it was still well liked by a number here. Recently, I found out about one build of a scene in the movie, "Aech's Basement," which was done by a fan, Orion (OR10NN Resident). high over the Foulds Cross sim. 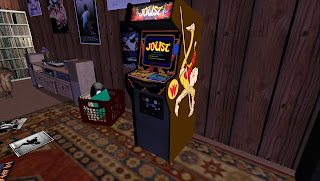 To begin with, it was Will Burns (Aeonix Aeon) who does the Andromeda blog and builds inworld arcade machines who told me about the place. He explained he had done a search for "arcades," and noticed "Aech's Basement" on the list. Taking a look, he discovered the builder had been a customer of his, "Aech's Basement had a Joust machine." 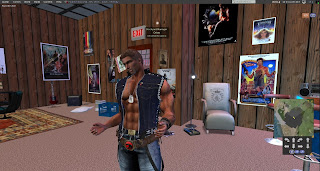 Talking to Orion later, who called himself the "Head Hangout Guy" of the location, he had a few things to say. When asked where he got the idea to build the place, he told me, "Well, kind of a long story. .I was one of the 'book first, movie second' people. So obviously the basement was important to me cause of the significance it held in the book. And this being Second Life I figured there should be a place to go to hangout like the people did in the book. But when I searched there wasn't anything. So taking the references from the movie and scenes I had seen from the Sansar sim, I made this place, with a few of my own personal touches." 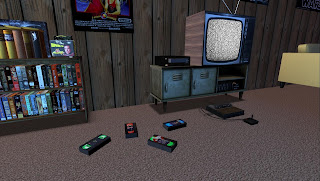 And what kind of personal touches? "Well, some of the posters....like Superman, Star Wars, Excalibur I added (which were references in book and movie). I also added the Superman symbol over the bar. The movie had a Swordfish, but I didn't see the point of it plus wasn't really my taste. I also added the 'Giant Robot' poster cause it was nice to reference the scale of them."

Of what he thought of the comparisons of Second Life to the movie, "Well I don't know Ernest Cline's background or inspirations, but I DO like to think that Second Life was his bases for the movie. No other system comes close to virtual gaming like he describes in the movie. Sure, the are other MMORPG's out there, but none that encompass everything like SL does. I think Sansar is probably the next evolution of that, but for now I still prefer and enjoy my Second Life. It's like Parzival said, 'where else can go and climb Mt. Everest, with Batman!" He chuckled. 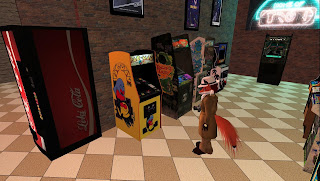 When asked what else he made in Second Life, he answered, "been building in SL for years. I also made Flynn's Arcade, which is from the movie 'Tron.' I put in a teleporter at the top of the stairs of the basement to link the two. In case you haven't noticed I'm a bit of an 80's buff, which is probably why I was so attracted to the movie. (laughter) " 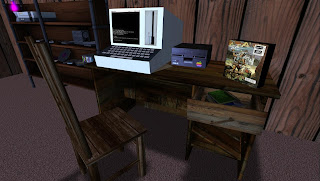 While we were talking, someone else dropped by. He complemented Orion on the build, and after some talk he eventually left. "Although I like people coming by," Orion spoke of the basement, "I did build it more for the long term nostalgia purposes. Hopefully it will also inspire more 'Ready Player One' creations in Second Life.  I would LOVE to see a sim based on Ludus, especially the hidden D and D quest. ... Ludus in the book was the first quest. I can understand for flow purpose why it was changed in the movie to a car race, which is why I would like to see it revived in SL. (It) was a great chapter." 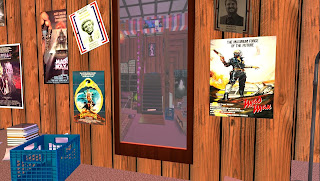 There was one moving item in the room: the hoverboard from "Back to the Futire" just in front of the stairs, moving up and down a bit. Several feet away was a picture of a mirror in which the hoverboard on that was also moving up and down a bit. I asked Orion if that was hard to pull off. He answered, "Not really, reflecting the hoverboard by making a smaller on was easy. The hard part was reversing and sizing the picture of the room in the mirror. Especially if I decided to change something, I would have to go and remake it. (laughter)" 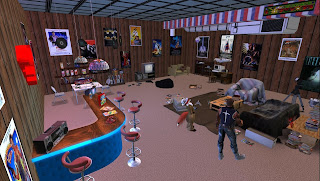 When asked what the most memorable reaction visitors had to Aech's Basement was, Orion told me it would be my request for an interview, "I was also asked by someone else if it would be around for a while as a RL teacher was going to bring her students online to this place, would be second most."

Orion concluded, "I would like to thank you and anyone else who has come by and appreciated not only the place, but the movie. Also, I expect The Basement will be here long term, as I have no plans of going anywhere *laughs* And I would also like to give a special thanks to Will Burns (aeonix.aeon) for providing the arcade games for not only The Basement, but also for Flynn's Arcade. They are quite amazing!"