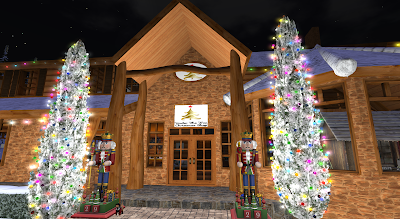 I am trying to ignore all the clothing sales and continue my Christmas décor tour. I spent the Friday after Thanksgiving decorating my houseboat for the season. Saturday I got back to Christmas décor shops . I love arriving at Under the Tree Christmas shop my first stop. 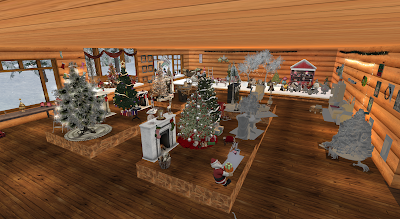 It always looks so gorgeous at the doorway with the shared environment. Inside is such a selection of any type of décor, lovely trees in one area, tables with little gifts and decorations for your own tables and signs for your walls. In the next area are delicious cakes , pies and pastries for your dining tables. Wonderful foods from ham turkey, prime rib platter and all the sides with utensils are available for purchase. 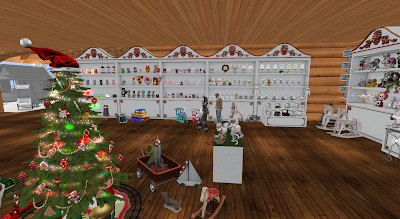 Another section is filled with delightful toys for all ages. I found some parents there trying to make decisions. Moving along into the next area I found wonderful outdoor scenery perfect for winter regions and snowy areas. Upstairs there is a great choice of furniture for the season. 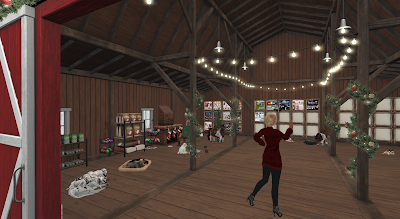 From the main building I walked down the path to the barn where I found little animals that any family would like to add to their homes .Check out the whole store it is just packed with so much to look at , especially the toy section. http://maps.secondlife.com/secondlife/Larsen/84/211/103 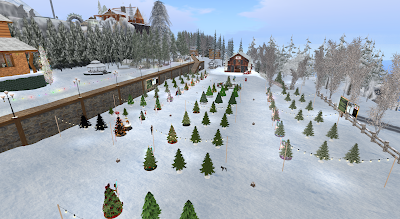 Just down the hill in front of the store is a favorite stop of mine, Tex ‘s Tree Farm. Here you can pick your own tree and chop it down! 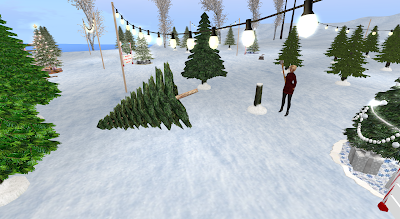 Grab and axe and go for it. It is great fun. The trim comes with the tree when you pick it up. I chopped down a tree but did not pick it up so it disappeared into the air. Tex has his trees growing and ready to take but he also has some other trees already set to go if you like, or wreaths. Some of the trees allow you to pick and chose what you want for decorations on it. It is a fun family activity. Enjoy! Larsen is one of the all time winter regions so dress for it! http://maps.secondlife.com/secondlife/Larsen/81/195/103 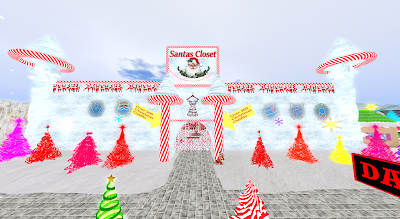 Christmas Delights is a great place to visit if you are looking for outfits among other items. They have over 300 outfits from formal to fun in their Santa’s closet. It is dazzling! I saw that ad and ran over there first to take a look at them all. They are from some well known creators so go take a look. I have to make a decision about a couple and will be back after I decide. Some cute holiday jewelry is also available there. 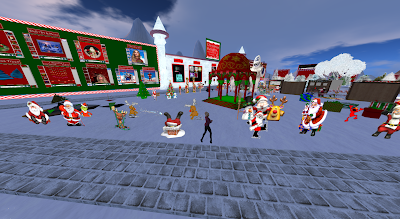 Outside one is surrounded by trees garlands, wreaths to choose from. Mickey and Minnie Mouse in their red oufits either standing or moving around for those who love these and other characters from comics and stories. For those who are prim conscious by necessity some 1 prim animations of Santas and other characters of the season. They impressed me with their cuteness! They also had some nice dances on sale for 50L and I grabbed a couple. There is a wealth of garlands on the wall here, some sparkling. On sale is a choice of two radios that are transferable with 20 Christmas stations available. Nice gift idea! Great place to just wander and check out all the décor. I saw some awesome skating figures for your pond. 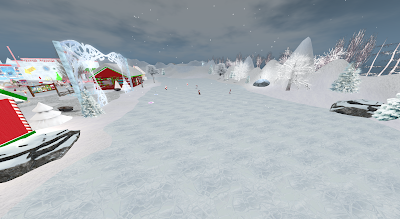 If you want to try some skiing there is a hill to climb and a saucer rezzer along with skis . Grab a free set and also a saucer to take with you for the whole winter season. Below the hill is a great skating pond with skate balls for singles or couples. I saw some awesome skating figures for your pond. http://maps.secondlife.com/secondlife/Gen/102/164/27

There are so many markets and shops full of seasonal décor I hope to get to a few more and then will get to more Christmas places you might like to visit that may have some shopping but more sites to just roam and take pictures. 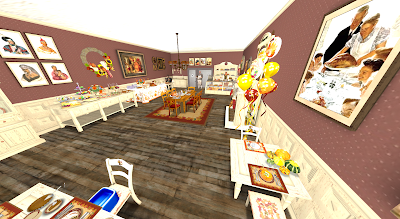 As I continued my travels in search of Christmas décor for your region or your home I came across a lovely display of Thanksgiving tables and décor at Botanica Holiday Store. I found sit down dinner tables and buffet tables with delicious treats. Balloons and wall décor, carpets and even a bakery counter. If you are looking for any of these stop over then go on to check out the gorgeous décor for Christmas. 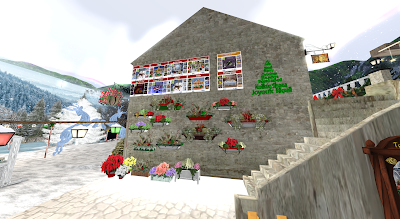 Outside I found wall baskets of plants, wreaths, more than one carousel. 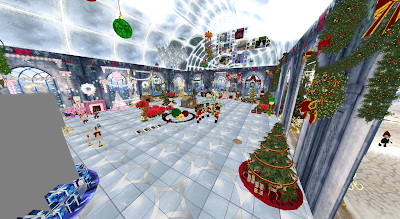 The exhibit hall is chuck full of all kinds of items to brighten your home with light and sound. A brass band is playing Christmas carols. Tall trees. poinsettias, and garlands are available. Look up and see the hanging mistletoe and other hanging décor. 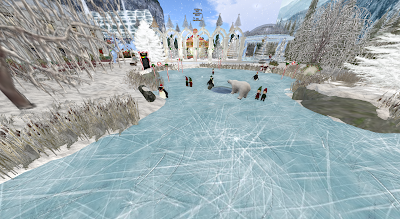 Stop by the ice sheet skating if you need a good size pond. Mr. and Mrs. Claus are out there surrounded by penguins, gnomes and even a polar bear. Grab the free iceskates and join them on the ice. There is a race track game that will put your score up on the board. There are teleports available to take you to other Botanica sites for other types of plant decorations.
If you wish you can climb the stairs and stop in to have your hair done. Farther along the walkwayis a wonderful music shop with harps and old fashioned instruments that has a great sale of music boxes for 99L going on. http://maps.secondlife.com/secondlife/Blue%20Moon/182/233/23 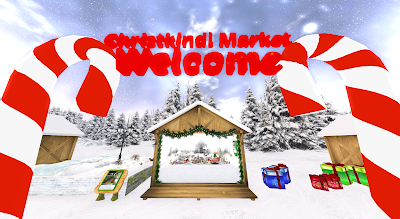 I went over to the 8th Annual Christkindl Market & Advent Calendar 2022 . Divia’s Design and here too is a wonderful skating pond for you. Christmas stall circle the pond offering a huge variety of décor. Nativity scenes large and small, Santa balloons that circle in the air above, doll houses , Christmas shelves either empty or filled with baubles, are a few of the items I saw. If you want a chestnut roaster to grace your skate pond you will find it here. 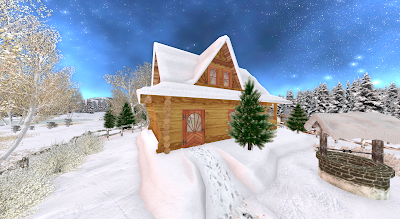 Need a cozy winter cabin all furnished? There is one here for guests or for vacation on your winter parcel.Great price too. 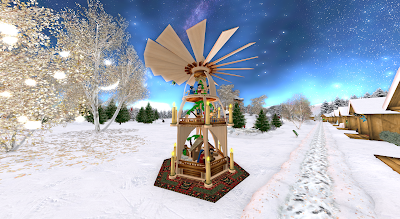 I love the rotation Christmas Pyramid music box that comes in three sizes as does one of my favorite decorations, the Christmas globe! You know I bought one, I just can’t resist globes. There are some wonderful Welcome signs for your properties also. Take the long walk around to all the stalls so you don’t miss any of the possibilities for new decorations. If you join the group you will find a load of gifts in the Old Barn behind the skating pond. Here is your entrance. http://maps.secondlife.com/secondlife/Wildwood/130/32/22 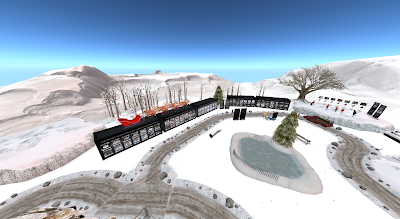 Do you love freebies and really inexpensive décor as much as I do? If so stop over at MiChIGaN's ShAcK! WINTER SALE. For group members there are great deals and a lot of freebies.
http://maps.secondlife.com/secondlife/Michigan%20Cove/132/109/1702

By Rita Mariner
Club Cutlass and Club Zero Gravity, go almost back to the founding of the Sunweavers Group, 15 years ago.  We had control of about 95% of the sim. So it dawned on us to create a couple of hangout spots, for the Sunweavers.

Since the theme of the sim was pirates, we had a pirate ship, in the harbor, and Club Cutlass was located inside, the fort, overlooking the harbor. Kind of leading to Club Cutlass always being an open air club. 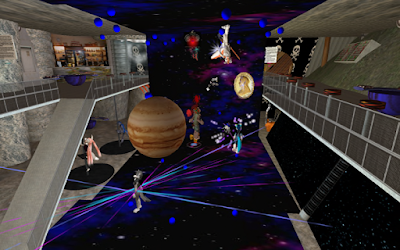 We then installed Club Zero Gravity, into a nearby ravine, covering it over.  Shockwave Yareach then created anti-gravity belts you could wear, allowing you to dance, while floating in mid-air, or prancing on one of the planets or moons. 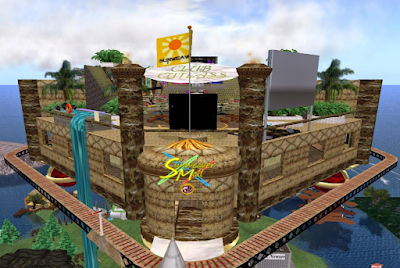 After getting tired of the restrictions imposed on mainland, we opted for a private estate. I believe we put Club Cutlass floating over our new estate of Buccaneer Bay. But this time it was an Aztec style castle. It remained as such for a few years. 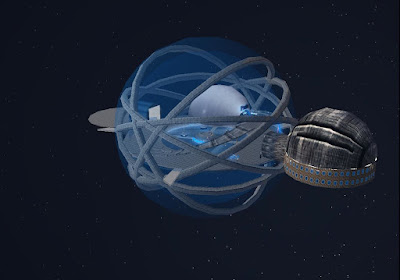 Club Zero Gravity was setup, on Sunweaver Space.  It was a huge sphere and inside the tables floated around. I am not sure if we ever got it on line, as we were always tinkering with it. 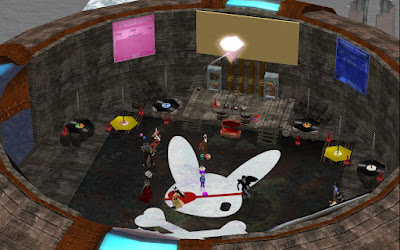 The next reincarnation of Club Cutlass was like the ELO album cover, the round doughnut, It was designed and built by Indio Quinnell.  Then after a while, there was a disagreement over the club with Indio as to ownership. We simply replaced it with the current Steampunk Pirate Airship. 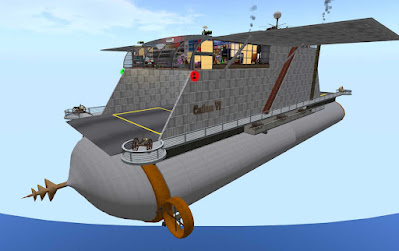 As time passes and technology improves and attendees keep growing in numbers. We have opted to upgrade current airship to a new improved, design.  More room, even for Dragons!  So even after 15 years Club Cutlass and even it's sister club Club Zero G, still have it where it counts!
Rita Mariner
Posted by Bixyl Shuftan at 6:00 AM 1 comment: