Moya, The Artist and Location 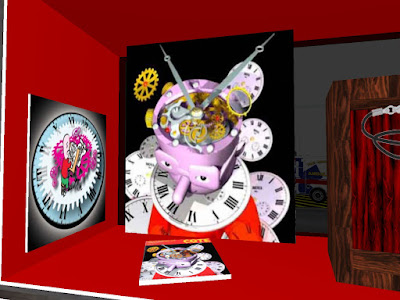 When I was serving as Ranger back at the Burn2 I visited a parcel that was giving away gifts of art. I took the art home and looked at it an wondered who was the creator? I met the artist who was amusing to talk to and became interested in learning more about him. 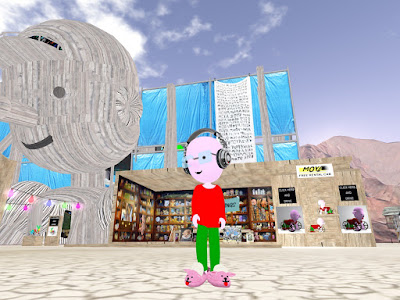 I came to find out from my friend Lee1 Olson, a fellow Ranger that this artist is most famous in his homeland France. The artist is known here in Second Life as Patrick Moya ( Moya Janus) and variations of that name. He is really one of the most interesting people I have met in SL in a while. 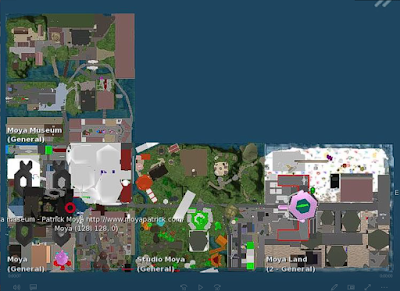 Lee1 has a whole section of his huge museum,  filled with works from Moya that I visited . The works are fun and engaging. I decided to go to see Moya’s own Second Life museum on his recommendation. This museum covers several regions showing  his art here that he has brought in from real-life and created here in real-life also. Amazing stuff! It took Moya Janus 11 years to build up his museum, starting with a floor plan. Moya owns four islands, about 256000m2 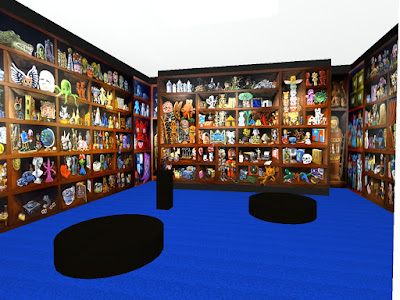 What fun we had visiting. My fellow reporter, kayly iali (Kayly Iali), who is also an artist, and I made an appointment for a tour. Moya came himself and took us for a tour in one of his cute cars. and Kamerina (Kamerina Kamala) came along with us.  We went first to a model of  his latest real-life exhibit which was like a curiosity cabinet that he painted in 20 days . Sadly the real life exhibit had to close because of covid 19. But here it is in Second Life though! 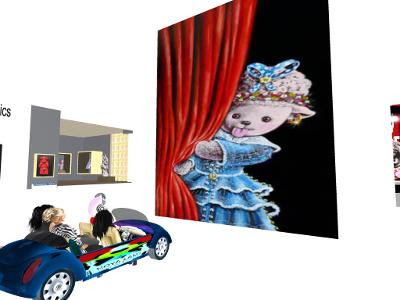 We then visited the models of his first works back in 1975. “From 1974 to 1977 Patrick Moya theorizes the consequences of television images on art. He thinks that when the artist is alive the creature hides the creator.” Moya Janus attended the Villa Arson in Nice. The Villa Arson is an art school devoted to contemporary art in France. When Moya discovered Second Life, he realized it had potential to realize his dream. Since he worked in so many different mediums, he is able to show all of his works in its entirety. He believes that Second Life will allow artist avatars to create comprehensive works that will survive their creator.When asked who were his influences were  his answer was “I have none....  me and my name.” 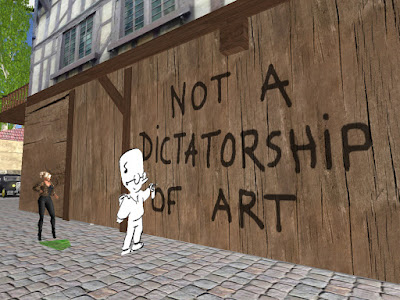 I came to realize that Moya is his art and his art is Moya. Moya loves dolly the first cloned sheep and she is everywhere. 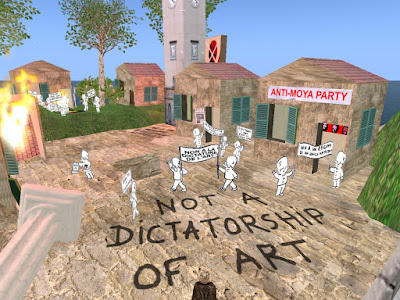 He calls his works the opposite of pop art but using the same methods. He is an original. It is obvious in his eclectic works  in so many forms, paintings, sculpture, pottery, .His attitude toward Second Life is that it is a place to prepare more art for the future  and gives him a place to work expressing himself using many forms available.Kayly asked if he did all his painting in real life and then brought it to Second Life. He does, and  thinks how can he use it in SL when he brings it here . Second life has given him an extension of his life works . Moya also has a section on his region near his museum for anti-Moya. The anti-Moya avatars are 2D figures who are protesting the 3D avatars of Moya  who has created an area of 3D avatars that he scripted. I had the nerve to enter and check out the area.! 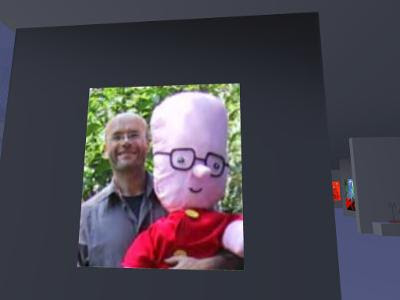 He does much live painting in real life in museums , many in as little as 40 minutes.His works are used by towns for festivals. Now that Covid has stopped these activities temporarily second life gives him an outlet to perhaps prepare for real life presentations when they are possible again. It is easy to see he is much loved in his homeland, France, and popular in other countries in Europe, and Asia.  Check out his  website that show so many past exhibits everywhere . 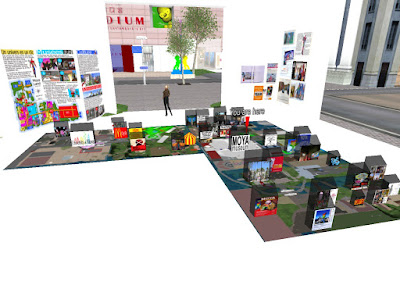 To see his museum it will take days, weeks maybe since you will have four regions of art in so many forms to wander through and experience. There is a marvelous teleport center where one can pick and choose which part of the museum they would like to visit that day .. some samples, Ceramics, Fashion, Street art, special exhibits of real life art such as his exhibit in Korea, The Hospital, his real-life  home,
( where or when or how he sleeps I have no idea),  and so much more. He told me that I would be writing ten pages to cover it all and he is right!  I will let you discover all that I did not write about. The tp center is here :  http://maps.secondlife.com/secondlife/Moya/118/108/22 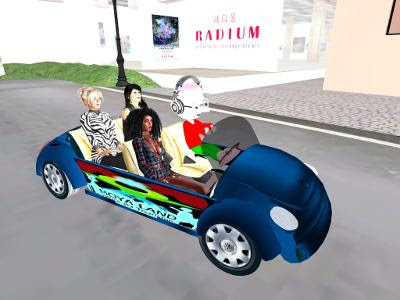 I bet if you want a personal tour it will not be hard to get Moya to take you all around, just ask. You can find free cars to rezz if you like. I did see some construction going on in case you find that a TP might not work or looks different than you expected. 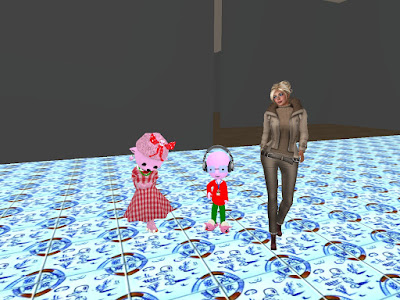 If you would like to watch the curiosities cabinet being created in real life you can see it all here.