The Dusty Streets of Dodge City 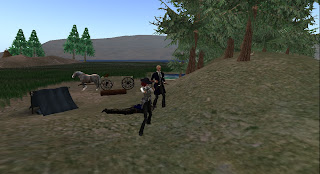 The Marshal held his gun in one hand and in the other, the rope that held the well-bound outlaw. He and his deputy were the only ones there to transfer the prisoner to the train to Leavenworth. The prisoner had offered a heavy reward  to anyone who could rescue him before the train. There was a hideout ready. Marshal Cobb knew he and the deputy were taking their lives in their hands. He had asked for help but no one appeared. He began to move down the deserted street dragging the prisoner behind him and watching for any sudden moves.


As the shooting started from all sides he ran through the prairie grasses and woods to avoid the shots but it was to no avail. Both he and his deputy went down for the last time. The prisoner was  dragged to the hideout and set free.
This was a role play event in Dodge City that was great fun to watch. 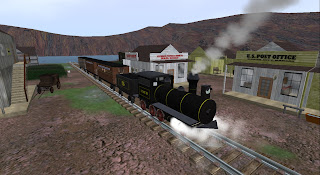 The American west was a wild one in the days following the Civil War between the North and South. People really began moving west from the Mississippi River when the war was over. Forts were established across the land to protect the migrants on their journey. Towns began to spring up near the Santa Fe Trail. Their histories are not that old since this was in the decades of the 1870-1880s. There has always been a fascination with  the well known bad guys and good guys, names known from movies about cowboys and Indians, Jessie James, Wyatt Earp  and his brother James, Bat Masterson, Wild Bill Hickok and others. 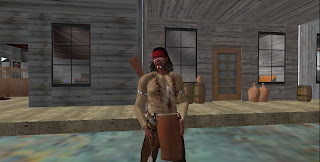 Now in SL there is a new role play sim called Kansas West. Here, life in the small towns of Dodge City and Ellsworth is re-enacted by those who love the era. Sebastian Cobb, Mayor and Marshall of the town, and Annaliese Cobb are the owners with the region. They try to keep peace but that is not easy. There are issues with the nearby Native Americans, outlaws passing through, rough cowboys who appear to drink and play cards in the many saloons.   Duncan Wolf is the the main builder who recreated the railway station, saloons, inns and shops based on the original photos of the Old Dodge City. The scene is planned to be as close to  real life  as possible from old photos of the era.
Duncan and his wife Stacy are part of the Cheyenne nation. Near by is Fort Harker. The new Captain, Tak3hiko is recruiting new soldiers for the fort. The soldiers come to town to drink and dance with the “doves” at the Lonestar Saloon and Dance Hall. Although the rule is ”guns left at the bar” there are  fights that often end badly.  There are frequent attempts at robbing the bank. It is a very busy town. And there are the  settlers who come to town for supplies, mail , and to attend Church. Next to the church is a hanging tree and  behind that is the cemetery. 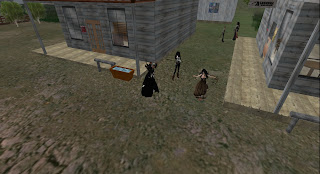 Kansas West has been up and running only  since the 7th of July so you can make as good life in town or out on the prairie. To participate fully you will wear a hud that allows you to collect food, materials, tools, and other necessities for your life there.  The Pinkerton Detectives have also now come to town. Dodge City is looking for new members: those interested in the history of the time and, especially,  role play; those who would like to join the  Native Americans, soldiers for  the fort, settlers with their families and of course, outlaws.
If you are interested you can contact any of the persons listed above, or you can join the group . There is an inviter on the wall of the railroad lobby. You will also find some free period clothing. http://slurl.com/secondlife/Kansas%20West%201870s/146/119/292 . Perhaps you can attend an event to see how you like it.
Nice people, nice place, but keep that gun handy!!!
Gemma Cleanslate
Posted by Bixyl Shuftan at 6:00 AM