Life Cycle of an Island

By Grey Lupindo
In August, 2010, my community of Syzygy decided to expand.   We had been a large community surrounded by water, and the expansion gave us more islands and even more water.   Many of us liked to fly and to sail, and the expansion would allow us to do both in style. 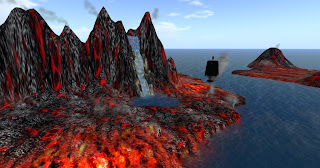 An island named Corvus was created, and I was fortunate to be able to build my fantasy home there.   It was an exciting day when the frozen land emerged from the sea.   For about two weeks, I watched the island go through an ice age, a volcanic era, and finally a cool down phase.    While this was happening on Corvus, other islands were being built and land expanded on the original Syzygy.   New people moved into our community, too.   We had great parties, and many of us created temporary exhibits to showcase our art and interests.   It was a heady time.


For over two years I lived in my dream wilderness home, the Aspen Loft cabin from Stonewood Homes.  I filled the land with wild animals from many creators in SL, too.   It was exactly what I wish I could have in RL, which is the wonderful thing about SL.   Here I could walk among the wolves and not worry about becoming their dinner. 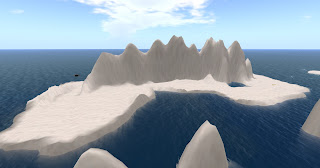 Unfortunately, the last year brought health, financial, and time challenges to many of the residents of Syzygy.   In January the community was faced with the prospects of closing down totally unless some adjustments were made.   One of the residents, Celtic Infinity, took up the challenge of trying to keep as many of us together on Syzygy as she could.   With the help and assistance of Samantha Glume, our long-time CEO, Celtic raced against the clock to protect and save our island community.


For a while it didn’t look like anything could be done.  I spent many hours last month looking for a different place to live.  At first I thought I would take a long cruise to get over the loss.   But I soon realized I couldn’t afford to do that.   So I began looking at other communities, and I was amazed at the diversity on SL.   There really is something here for everyone, although for a long time I wasn’t sure there would be anything for me.


I enjoy Steampunk, and there are a couple of great communities in SL for that.   But my wolves weren’t going to be happy there.    Too much clanging of metal and hissing of steam vents.   I looked at renting a boat dock and living by the water.  But the industrial ones were too scary, and the resort ones were too hot.


I began looking at apartments in beautiful foreign cities, but they didn’t seem like home.   I looked at apartments in cities more like home, and realized that I just don’t like cities.   No matter what country they are in. 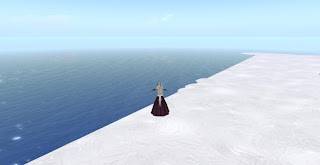 It was a sad Sunday morning when I logged into SL and found that Corvus had totally disappeared.   I knew it was coming, and I had packed up all my things a few days before.   But it was still a sad and empty without my island.   I missed the birds singing and peacefulness that I felt when I walked through the woods and listened to the waterfall.   Most of all, I missed my friends.


So I was very happy when Celtic told me that she and Samantha had a plan to keep at least some of Syzygy alive.   They are working on the details now.   I’m not sure how much or who will remain there.   But as of today it appears that I will be able to move back to the original Syzygy.  My neighbors will be my very good friends-- Grjandomore Greene, whom we call Gri, and Muse Nishi.  Gri and I were neighbors on Corvus, and he is a great person to share land with.   He never once complained about my wolves howling or disturbing him.   Muse Nishi was the first person I became friends with in SL, many years ago.   She’s very creative and fun, and I’m glad she will be a neighbor.


The island of Corvus was a wonderful place while it lasted.   I will always have happy memories of it.   Until my new place on Syzygy is finalized, I have rented a temporary apartment in a place that seems to be much more suited to me—a tree house in a forest.  I’ll let you know how the wolves adjust to live among the branches.
Grey Lupindo
Posted by Bixyl Shuftan at 6:00 AM