I was sorry to miss the big opening event at Lea9 where King Kong reigns anew and a few after that. Skull Island is the home of the mighty ape where he was discovered over a century ago. For those who don’t know King Kong and his history, “King Kong is a giant movie monster, resembling a colossal ape, that has appeared in various media since 1933. The character first appeared in the 1933 film King Kong, which received universal acclaim upon its initial release and re-releases. The film was remade in 1976 and once again in 2005. The character has become one of the world's most famous movie icons, having inspired countless sequels, remakes, spin-offs, imitators, parodies, cartoons, books, comics, video games, theme park rides, and even a stage play. His role in the different narratives varies, ranging from a rampaging monster to a tragic antihero. 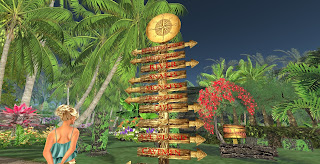 The Skull Island in Second Life is described as lush and it is. It is the ultimate tropical land in SL. I walked the trails and paths and saw more flora and fauna and insect life than I have seen in one location in Second Life in my nine plus years. It is really gorgeous.  It is very easy to move around. One has options , teleports are located in main sites , or walking is a great option. I took the teleport on my first visit just to orient myself and make sure I did not miss any of the sites mentioned. On my second visit I decided to walk all of the winding paths and watch the signs leading to the sites .
The first creatures I met were  from the dark ancient Mesozoic age. On Skull Island they have survived and mixed with more modern animals (including human). I knew the mighty gorilla was somewhere here. 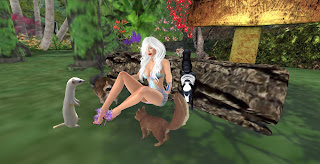 On my walk as I left the visitor center I encountered an old friend that I had not seen since my camping days almost nine years ago. It was nice to see her as she sat surrounded by little friendly creatures that approached from the surrounding jungle. After our reunion and conversation I started to roam. The vibrant flora is striking and deserves a second look. In the recommended windlight it is almost ethereal against the sky that warns of volcanic activity somewhere in the far distance. I stopped at the well protected native village which was deserted at the time and checked out the huts. 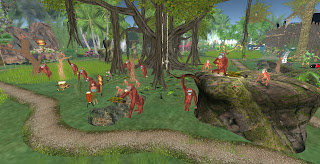 Outside the walls of the village  I visited a friendly Orangutan group and played some drums which they seemed to like. My next stop was at the Crocodile Lake where I watched as a croc came out of the water, grabbed a monkey and headed back to his rock....hard to watch but all a part of nature. I did not stay very long after that. I passed by a waterfall cave where a whole family of dinosaurs lived. 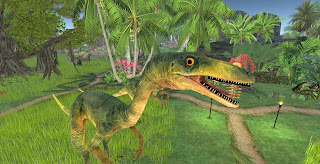 Next I took a tour of the Caves that extended in different branches , each with its own surprise . Take care! There is one with no exit . Running in the other direction  I emerged to meet a Komodo Dragon! I ran on by and did a circle to the other side and found the entrance to an open glass tunnel that gives one a lovely view of the underwater river. At the end there is a surprise .

There are more nooks and crannies to view if you leave the paths and I will let you find them. On my teleport journey my first visit was to the bird viewing platform . There I found not only pterodactyls but parrots and other colorful and interesting birds . By the way while you are wandering you can do a hunt for lost eggs. 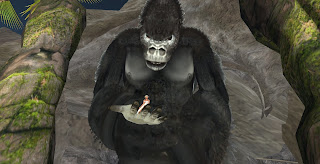 I ran through a  tunnel and found myself facing the king in his home! I was able to jump a raptor that was protecting him and get close to him. It was an amazing sight! I sat in his hand knowing I could get away. Don’t miss that opportunity!

My last teleport visit was to the final downfall of the mighty King Kong. New York city is the last place poor Kong lived and died. It is a fitting ending to the installation. At least I was able to go back to see him in his home again in  Lea 9.

This whole installation is the work of Mrs MistyRose Lex (MistyRose Poindexter) and Mr.Lex (oldlex Resident). I applaud their work.

There are activities going on at Skull Island and you can see them at http://lindenarts.blogspot.co.uk/2016/07/lea9-king-kong-experience-new-schedule.html
Begin your journey to the past here before the end of the month. I do know Mr. Lex already has a new project in mind.   http://maps.secondlife.com/secondlife/LEA9/113/103/30
Posted by Bixyl Shuftan at 6:00 AM