The Museum of Wizardry at Coniston

The sims comprising the Greater Coniston and Keswick area occupy a portion of the north west corner of the mainland continent of Sansara. It was originally designated as the area where the Lindens themselves would have homes. It lives on as a residential area modeled somewhat on its northern English namesakes. The locality has a number of scenic features, shops and venues run by residents, including the recently re-opened Museum of Wizardry in Blackstone Castle. I caught up with Salient Wizard, the curator of the museum to find out about the museum and his plans for the future. 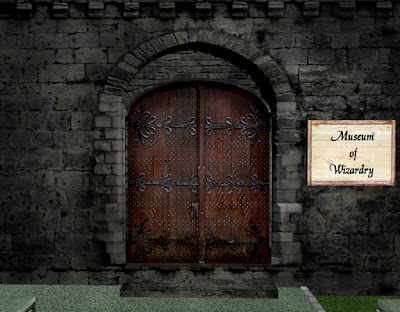 He tells me: "The Museum of Wizardry is a small example of the many artifacts, images and displays related to the study of secular magick, presented in an educational format for the common person."

It's obvious looking round the museum that the owner is serious and keen to present information clearly without a whole lot of "hocus pocus", but there is a sense of fun here, too. Coffee and punch is available in the entrance lobby and a poster on the wall reminds us that "The only real things in Second Life are our feelings so please take care of each other."

I ask him what he hope visitors will take away with them from their visit. He explained, "I hope they'll understand what these curiosities are without offending their own faith or sensibilities and enjoy their time. It's a world often fantasized about, and twisted by Hollywood. Real Magick isn't shooting Fireballs from a wand, but the slow deliberate improvement of Self and our World, much like Psychotherapy, from which much is based on Old World Magick as Carl Jung (Father of Psychotherapy) discovered. Wizardry is a profession of old, wise men and women who love and use wisdom to guide themselves and their fellow neighbors. Nothing dark or sinister about it at all and definitely not 'satanic'!"

Salient's human spent three happy years in real-life England, during which he visited a "Museum of Witchcraft" that gave him some ideas for his own virtual museum in Second Life. He explains to me: "the English are very proud of their Celtic, druidic and pagan past, and are more tolerant of magick than Americans. Many of the greatest Occult members of the last 100 years were from England: Israel Regardie, Aleister Crowley, Gerald Gardner, Dion Fortune, and even Isaac Newton centuries ago!" Some of these figures from magickal history can be seen on the wall by the staircase in the museum. 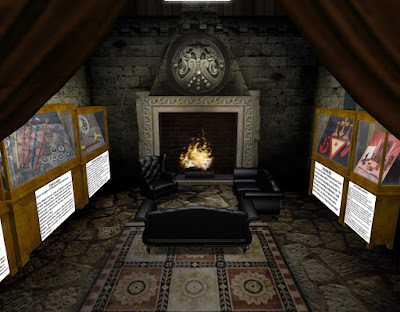 In the first room you come to, there are display cases with information and artifacts on the history and practice of Wizardry and Magick, including the Tarot and a variety of different types of "wands" that are used today. There's also some comfy seating and a roaring fire, where weekly "fireside chats" are held at 8pm SLT on Fridays. These are informal opportunities to meet Salient Wizard and discuss wizardry.

In the courtyard of the museum is a special exhibit that will be changed each month. The current display on "Magickal Germany" is due to be changed around January the 15th to one on "Geomancy", which is a form of divination used by medieval peasants and wizards. Apparently it involves poking holes in the dirt to divine answers and has a lot of ties to astrology. It should be fascinating.

Going through doors and climbing stairs reveals more rooms full of artifacts and a wonderful view of the area from the roof. 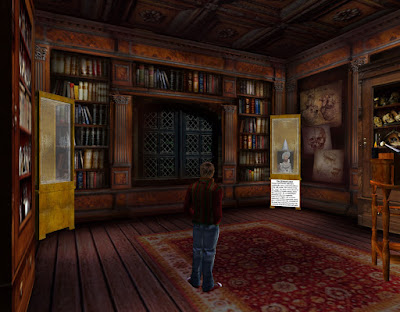 There are plenty of opportunities to find out more about Magick and Wizardry in Second Life and beyond, for those who may feel inspired to explore further. He acknowledges that there are plenty of books available on the subject and it can be really overwhelming. "A systematic Course of Instruction is the slow and steady way to become comfortable and acquire the skills to work effective magick. Personally I recommend Greyschool.com or Witchschool.com. From there, one can join local groups, often found on Witchvox.com. If you are new or old to Wizardry, the Greyschool also has an open campus of events at their SL campus here . They also do SL classes based on their website curriculum for students of the school."

Salient Wizard himself teaches classes inworld with help from an owl on his shoulder, called "Horton". "He was a great tool for the kids I taught at Greyschool, His name is Horton, he sees Hoos." The wizard chuckles at his reference to Dr. Suess. 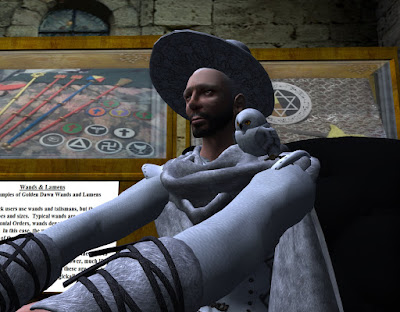 I'm not sure what one should expect on meeting a wizard. This one seems playful, yet passionate about communicating and sharing his knowledge.

"The beauty of Magick is that there is no 'correct' path, it's your personal path." He tells me, quoting Cicero to drive home the point, "Omnia Vivunt, Inter Se Conexa! (Everything is alive and everything is interconnected)."

The Museum of Wizardry: http://maps.secondlife.com/secondlife/Coniston/238/85/39

Klaus Bereznyak
Posted by Bixyl Shuftan at 6:00 AM