Some Haunted Places in Second Life

Second Life can be a lot of fun around Halloween. Besides the creativity in avatars being worn by residents, landowners are showing their own talents by showing off some Halloween haunts. A few are up year round, getting more attention this time of year. Others are seasonal, appearing in October to provide some scary fun.

Sinatra’s Spook House calls itself the first haunted ride in Second Life. It is one of the oldest, with yours truly having seen ads of it in sandboxes when he was a newcomer in early 2007. Unlike most later rides, a ten Linden fee is required before you can sit in the card and enter the tunnel. Although a little scary, it’s not very long. It’s main attraction would seem to be it’s status as the oldest haunt. Spook House is located at the Noyo sim at (102, 149, 25). 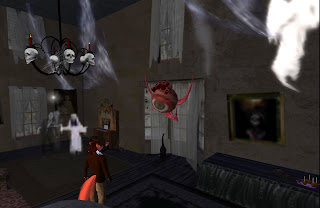 The DarkDharma Haunted Manor is a fairly popular haunt. Walking up, one sign will tell you to set your viewer to Midnight and particles to 2048. Another panel just outside the house asks you to look for nine “tarot bags” around the house, though warns you may encounter objects with powerful spells while looking.

Going through the house, I didn’t see many of these “tarot bags,” but there were a number of interesting features. The living room has a seance table. The hall has a trap that will draw blood if you don’t watch it. The attic has a nursery of horror full of demon toys and possessed kids. The kitchen has a witches cauldron with a shelf of ingredients, and a list of recipes which all can be used to make potions. And everywhere are ghosts and spooky images flickering by, with haunting noises in the background. 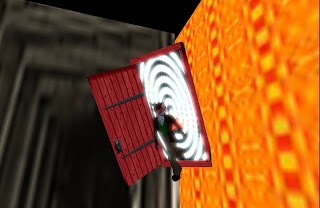 The Heaven's Halloween Haunted House is a hallway of scares that one has to pass through. Some of the images stare at you. Others suddenly appear as if to say “boo!” The path occasionally comes to an end with a magic doorway, which one must open and enter. One room offers magical tarot cards, which may give you a blessing or a curse. There's also a deathtrap to avoid.

At the very end is a rocket sled ride, which will launch and send the riders on a high speed tour of an area, then will climb high in the air, seemingly into space, and then plummets down back to earth, eventually landing near the entrance of the sim. 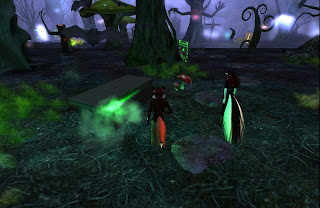 Bentham Manor is in two sections, Bentham Manor and Bentham Woods. The woods are best viewed at Midnight, in which the forrest appears as its creepiest, full of evil trees, dim spooky lights, and everything in the distance shrouded by mist. One could walk around back to the manor grounds, or take a magic door shortcut. The manor itself was full of spooky scenes, such as books in the attic flying around. And the manor grounds had a few things, such as dark tunnels to pass through.

One thing that I noticed were a few people on the grounds with the “Bentham Manor” group. Some just watched. Others were more vocal, talking about how they were going to get the visitors, “They came here for a scare. *I’ll* give ‘em a scare!” No word on whether they were just fans having fun, or connected with the owners of the place.