A few days ago, on Thursday Dec 9, the opening ceremony to the new sim in the WW2 Combat RP region took place. Made for the US, British, and Free French teams, the sim was appropriately named “Allied Base.” 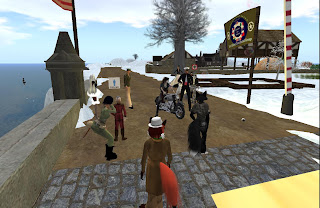 Seaone Bunyip officially opened the sim at 7 PM SL time, “Welcome To Allied Base WW2 Sim. This base is created in honor of the United States Forces and Veterans that fought and died for freedom In France and other theaters in WW2 and therefore will fly the United States Flag. Allied Base Sim is Headquarters for and Administered by the 1st Allied Command Group.”

Seone continued, “Historical notes on the area of this sim represents: This airbase represents the Advanced Landing Ground "A-72 Peronne Airfield France. Bastonge is 120 miles to the North East. Omaha Beach and Utah Beach are 175 miles west. Paris is 75 miles to the SW. Vermand is 5 miles to the East. St Quenten is 11 miles to the South East. Village of Brie is 4 miles to the West. Peronne Airport was a pre-World War II civil airport, consisting of a terminal, hangar, some support buildings and a grass airfield, serving the nearby city of Saint-Quentin.”

“We want to give a big hand to the builders of the sim! A special salute to the best builder on SL, Deusen Marx! A special thanks also goes out to Vickster Kuhn and all the WW2 sim owners. The sim is here for everyone to enjoy! Respect the rules of the WW2 role playing sim and we all can have FUN!” And with that, a ribbon at the opening gate was cut, and the place was declared open. For the grand opening a truce was declared between the two sides. A number from both the German and Allied teams showed up. 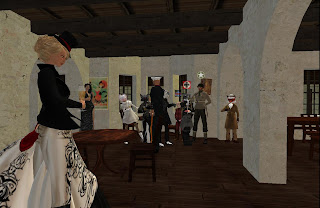 Deusen Marx soon told everyone, “I added something to the sim today in secret.” And he revealed a halftrack, though one needed to be “armed” with the Vice combat tag to drive it. The main group of people soon ended up in the bar. “This pub is called Leona's,” Deusen told everyone, “It is named after Vickie's deceased Grandma. I think we should all raise our glasses to Leona. Cheers! To Leona!” And people raised a toast, “Cheers.” “To Leona.” “Health to the new sim.” “And also a toast to our host, Seaone, thank you for your generosity and sweet spirit.”

This was soon followed by some cheerful joking around, such as funny gestures, and discussing the supposed reaction one skunkgirl officer in the German air group got from the Allied side when getting a commission during a medals and promotions event, “They sent a tank to the ceremony.” Later, it was described the tank was blown up, but the driver raised a toast to the newly promoted with a glass of Guiness ale. 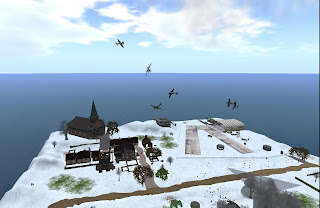 After a while, some of the German pilots left. It wasn’t long before they returned, in a squadron of Stukas. Fighters were called up, but the Stukas didn’t have their combat enabled. They were just circling around for photo shoots.

There will be other events for the WW2 Combat RP this December. Among them, Joe Sparrow's yearly Christmas drop, on the 21st, "Every year i take up a plane and drop boxes with gifts in them. It's random as to what theyll get but i do put retail items in. Last year it was on my sim. This year, it'll be here."

And so, the Allied teams now had a little more breathing room, no longer confined to a tiny strip of land on the southern edge of the southernmost sim.