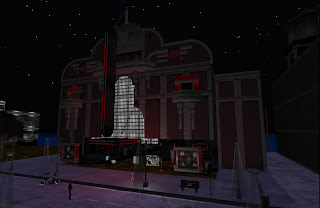 One of my friends kept talking about a “Industrial Gothic” club she frequented, Club Zero of Nocturna Urban Designs. “This is what this club is,” she told me, “Industrial club, Gothic club, Live DJs, ... a lot (of people) love this place. Ans we have great bosses here. They actually care about their staf and patrons of this club.”

Getting to the place, from the outside it looked much like a huge old-time theater, but in dark tones, black and dark red. The place had an audience inside, so it took a little time for things to rezz, a few vampires chatting in the lobby. The inside of the place continued the dark gothic look. The dance area was on the second floor, getting there taking a walk down a hall that wound around and up. And getting there was a healthy-sized crowd, close to a couple dozen in size, with club owner Musette Demonia and head DJ Hazard Fizzle leading the party. 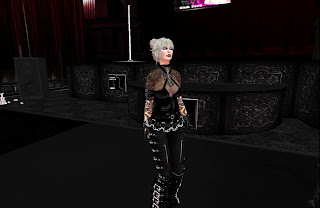 Chatting with Musette, she told of the club recently celebrating it’s one year anniversary with an all-day event, “24 DJs in 24 hours.” Of the reasons the club was built, “I wanted a place where people would feel comfortable, bring in really good DJs, some place to feel home, blow off some steam, something that reminded of the club scene we grew up in.” Asking about how big attendance can get, she told me the two dozen at the time, “this is average. Late night it gets busier. ... Anywhere from 10-40, depending on the DJ.”

Hazard felt happy of the 24 hour event, “that was fantastic, so fun... rapid fire DJs all day ... We had so many great DJs doing short sets that the crowd just stayed. Evening was most popular. Saturday night, all of our best House DJs played that night. Pagan, Glitch, Kittynes.. they had the biggest.” But the club also has other events, “We do a cross dress night that is always very popular ... girls will be boys and boys will be girls, changing gender for the event. We do it every few months. People have fun with it. We also do Dj battles every now and again. ... 1/2 hour sets, back and forth. Any thime the DJs get to show off, it brings something special.” 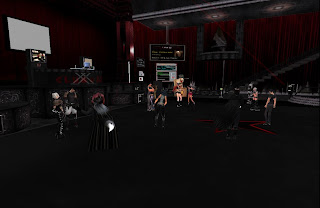