My friend Erin Fensen, who loves everything that moves fast, suggested I check out “Tron”. She and her friends have been playing there recently. The role play is a tribute to the movie and is huge, covering the sims of Vixens Isle, Pattern, Rebma, and Amber. Start the adventure at Tron Legacy Adventures-Medie, Vixens Isle (167, 233, 2454). 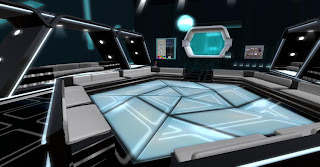 You will arrive at the Rez Restore Point at the End of Line Club. This area has the traditional grid of Tron, a dance ball, couches for socializing, and information about the RP sim. Notecards were easy to find and give you a quick update on the area and lingo used in Tron. This makes it easy for a novice to get into the game quickly. Membership in their group "Amber Racing Association” is free.

Walk up the ramp to the right to go into a HUGE play area. This is a place for some serious fun. Free Tron clothes and a demo Light Cycle are available here so you can get into the mood immediately. The area is decorated with set pieces from the movie that are so big they wouldn’t fit into a photo.

While I was looking at the clothes and light cycle, resident AmyLee Rexen arrived and rezzed her Legacy BETA 7 cycle. Rexen offered to let me ride it, and she assured me it was easy to shift and control. But when she warned me that it will blow up if it hits a wall, I decided to watch her ride. Rexen said she is in training for combat. She tied in her first attempt when she and her opponent both hit their own light trails. “But it was still fun,” she said. 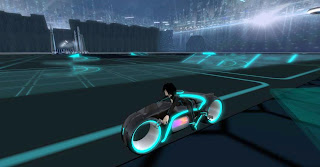 The sim is very active, and three or four residents arrived while we were chatting. Resident Spooko Zauberman came by to ask about the cycles and the RP. Group member Rhaiyu Ninetails, who had joined us, was friendly and explained many of Tron’s amenities. “We have the club located here, of course, which serves as the entry point,” she said. “Most of us enjoy being here, close to the entry point, and socializing. Vendors are located to the northeast of the sim. The south contains the Lightcycle battle grid, and further south includes a tank battle region, plus Kevin Flynn's home while in exile.” Ninetails told Zauberman that the light cycles can be bought in the mall and also in the Marketplace online. 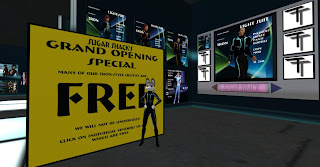 When I heard the word “mall” I knew where I wanted to go. The first shop I came to, Sugar Shack, was having a Grand Opening special---free Tron clothes. Even if I don’t return for combat, I knew I couldn’t pass up that bargain. The suit looks like a snowmobile outfit, and I can definitely use one of those. The mall area has a number of Tron-related stores and room to expand to a second floor that is reachable by escalator. Flynn's Arcade is nearby, but I didn’t have time to check it out.

The Amber region is already used by many residents for drag racing, and the Light Cycle racing arena will be found here. Superbikes and Gee Bee Aerial Racing is also done here.

In addition to the playing in “The Games”, other RP opportunities exist, such as being refugees on foot or bike racing to get past the tanks, rescuing friends, making secret contacts, uncovering plots, or reaching the Safe House for the next part of the quest. The only thing better than watching the 3d Tron movie is living it in SL.

Posted by Bixyl Shuftan at 5:00 AM