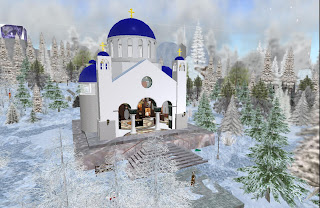 While at one of Gemma & Quark’s parties recently, I ran into someone with whom I got into a talk about Easter. She mentioned a church building in Second Life would be decorated for the holiday: Saint George Church in the Larsson sim. So on Easter weekend I hopped over.

The sim itself was white with snow, trees both bare and evergreen covered with ice. stone steps lead up to the Eastern Orthodox style church, which has white walls and blue domes with crosses of shining gold. There is no closed door in the front, but an open archway leading inside. 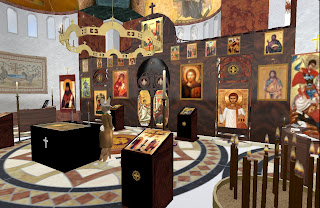 Inside, there are a number of icons, Eastern Orthodox religious paintings, on the back wall, called an iconostasis, along with a number of paintings on the ceiling. There are also numerous lit candles, including incense candles. Some are on candlesticks or holders on the ground. Others are in a chandelier on the ceiling. Behind the wall of icons is the sanctuary, which houses an altar. In real-life. Traditionally, there is only one ceremony a year inside this room.

The notecard I was given, which can also be found by clicking a plaque near the entrance, did not describe St. George’s as being based on a single real life church, but rather based on the style typically found in Eastern Orthodox churches.

This church is one of the the most accurate and detailed in SL. The building itself is almost entirely hand-made, photoshop techniques have been used sparingly and only to accent the build. All icons and trim come from RL Eastern Orthodox churches in Europe and the US. The building itself is done Byzantine style with elements from the Serbian, Greek and Russian churches. St. George is 100% accurate down to the choice of icons and their placement in the church; one may even peek behind the iconostatis and find an altar area ready for a liturgical service.

Another aspect of this church is that it has been a group project. Various members of the "parish" community have contributed at different times, each giving something according to their ability; things, ideas, Linden$ and labor. The process has been very "real' in the sense that we have all learned to "live" and work with each other ..... and in the end value each other; it is a community composed of Serbians, British, Americans, Germans, Italians, Swiss, Bulgarians, Russians, Australians, Greeks and Dutch. 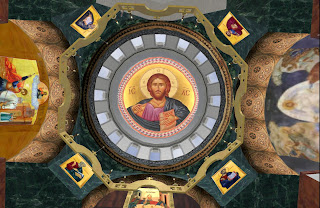 The church will not be used for actual liturgical services but instead as a place for learning about the Byzantine/Eastern Orthodox faith and cultural influences. The intent of the St. George community has been to provide a warm, welcoming spot in SL that is in a natural setting. The choice of a snow sim was accidental, but the church has become the jewel in the monochromatic setting and now the building has taken on an organic quality to it linking it to the snowy surroundings. The grounds are extensive, and include a pilgrim's chapel for private prayer and a wilderness trail that can only hint at the beauty of God's creation.

Eastern Orthodox icons are images which give us glimpses into the spiritual word, images that bring us into a more complete, unbroken reality. Icon writers (they are called writers not painters) understand this fundamental concept. Yet, icons are not only boards with images; humans are icons as well, made and called to reflect that complete, unbroken reality. So we offer St. George to SL as our icon, written by a community seeking that Complete, Unbroken Reality.