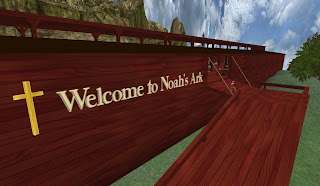 I was recently told about a Noah’s Ark build in Second Life. Handed an LM, I later used it to head to the Necros sim. Arriving there, near me was a huge ship on a hill, both taking up much of the length of the sim. Getting inside is via a long ramp, walking past the title “Noah’s Ark” on the side. Three decks high, one enters the ship on the third.

Written on the wall is a brief overview of the story of Noah and the ark. On the table is a list of instructions Noah was given about the construction of the ark, including it’s dimensions of 300 cubits long, fifty cubits wide, and thirty cubits in height. There are a number of tables full of tools around, as well as some gardens. There’s a potters’ wheel here which you can sit on to use, and receive a pot after a few minutes. You can also use a plane on a board or scrub the deck. 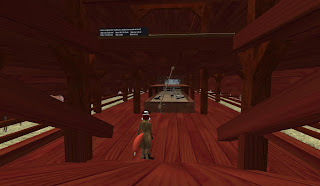 Deck two is where the animals are. In the middle are cages with birds and insects. on the edges of the room are stalls with various animals. There’s also a picture of extinct animals, and a pen with dinosaurs in it, a rainbow on the pen when clicked revealing a notecard, the writer feeling there were probably dinosaurs on the ark, referring to the “behemoth” descrbed in God’s conversation with Job (Job 40:15-24). Only a small area of deck three is accessible, the builder of the sim feeling it was used tor storage of food, water, other supplies, and ballast.

Outside of the ark, the path leading down a hill leads under a rainbow. Further away is a picturesque scene with various trees, waterfalls, ponds, and more. A number of these items were up for sale. There’s also a small church, named the “Greenwood Chapel,” next to a cross and a number of bells. People can go into the church and sit on the pews. On the church was a notecard dispenser. The card revealed the creator of the place as a Dragomir Greenwood. 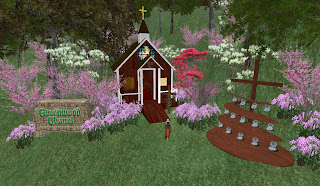 Here I am known as Dragomir Greenwood, on the Internet at large I am BountifulKnight, but at home and church, I am simply George. So why am I in Second Life? When I saw a preview about it on a television show, I had a very strong feeling that if people were coming to this place, then Christians needed to be here too. I determinied that I would come, learn about it and build a prayer chapel here... and so I did. Secondly, I saw some potential here to earn some income to support my family. As of the moment, I'm still in the beginning stages of that venture having learned some lessons the hard way, but it is beginning to show some promise. As the apostle Paul made tents to earn his own keep, so I make things here in SL.


An interesting Biblical build on the Grid.

“May God bless and keep you and draw you close to Himself that you may live in His abundant Love.” - George (Dragomir/BountifulKnight)