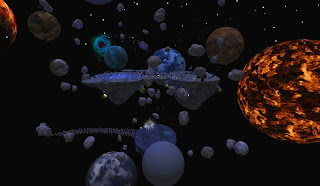 The Inspire Space Park has been around in Second Life for at least a few years. But it’s a location that continues to draw crowds every day. The park doesn’t represent a real place in space or in science fiction, but is more of a place of the imagination.

Upon getting there, change your environment settings to Midnight to get the best view of the space surroundings. The place may take a while to rez, as there are always many people here. Sometimes you may need to try twice or three times to enter. Even at odd hours, there are still a number of people around. But once everything comes into focus, visitors are rewarded with a visual treat.

Those arriving at the entry point will find themselves on a large asteroid’s flat surface. Smaller asteroids float nearby. Further away, planets and stars can be seen in spectacular views. A haze conceals the ground view, and from where you are it might as well be a nebula cloud. The easy music in the background adds to the atmosphere of the place.There are a few seats nearby one can relax on, including a circle with meditation poses. There is also a bridge of stones to another large asteroid. One of the fun things about the place, you can hop to some wandering poseballs via green teleporter across the asteroid. Getting on one, you float around, slowly tumbling in orbit. One can do it alone, or with a friend. The park makes for a great place to take a date and quite literally sweep her off her feet, and slowly drift among the planets and stars in each others arms.

In the past, there were also teleporters to nearby locations. They’re probably still around, but I didn’t see them in more recent visits. One is a drive-in theater, the “Inspire Beach and Drive-in” at Shinda (105, 189, 26), near the highway. It used to have a 1950’s look, but more recently the tailfinned classic cars were replaced by space-age skycars. There is also a space-club, the “Inspire Dance Planet” in the Butsu sim at (217, 214, 1546). When I dropped by some time ago, it was a space-age club with bright neon colors. From outside, it looked like a star. Someone told me other larger planets and stars had hidden surprises inside. 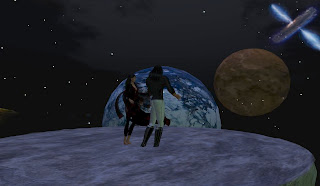 There are occasional events held at the space park. Cypress Rosewood has on his website a film of him performing there. On a more recent visit, there was a particle show. The place was so full of particles, a friend had to leave due to an overheating graphics card.

The Inspire Space Park is a beautiful work of art, a stellar dreamland.

The entry point is at Shinda at (34, 211, 1559). The okace is owned by the Virtual Life Media group, and was made by Earth Primbee, Grafx Newbold, and Raphael Cremorne.