Rendezvous – The World of Mermaids 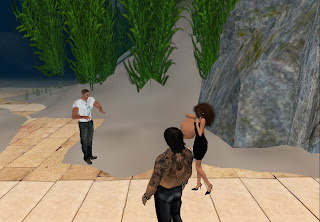 If you’re looking for a romantic setting, far from the crowds, explore the undersea mermaid domain of Rendezvous. Benoit Lednev established five French gay sims and two Wild West, before he incorporated some of his own interests into Rendezvous with help from his friends.

“This is the mermaid domain and above is the world of sirens. I wanted to do a marine park,” said Lednev, as I and musician Lars Mistwalker received a personal tour of this colorful corner of Second Life. “I was in the Navy and I love animals. This park is the one sim most like me.” 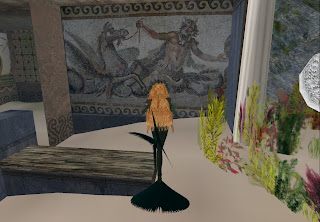 Those interested in morphing into merfolk need only click on the outfits provided free of charge. The park consists of a welcome area with a Roman tavern, the Ulysses Neptune statue and a mosaic theme that depicts a scene of Ulysses, where the hero is chained to resist the songs of the sirens. The classic Neptune comes from Pompeii art. The sounds of whales communicating and the motion of the waves surround you.

“Next you can ride the octopus or seahorses. There’s also a cave with romantic places to cuddle, areas where you can dance and homes for lovers,” said Lednev through his translator. “My greatest challenge was locating different types of fish to the area.” There’s also a Roman arena where the spectators are fish. He considered adding Roman animations of fighting but knew it would take away from the romantic qualities of the sim. He would love for both straight and gay couples to explore the depths of his and his friends’ creation. 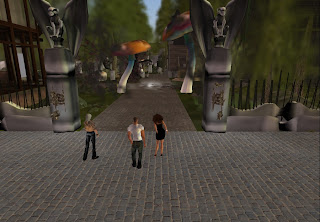 The tour of the sim ends at the statue of a mermaid. Above Lars and I get a preview of a town inspired by Halloween. We are teleported to Salem Village and immediately get goose bumps on the arms of our real life avis. The eerie atmosphere is expertly captured as one enters a haunted house. Hollywood directors would love this virtual representation that you’d never want to live in. First of all, you’re greeted by a zombie that thinks you’re dinner. Inside there’s a talking Ouija board, a séance table, an empty rocking cradle and ghosts singing patty cake. When the girls ask why don’t you play with me, you’re ready to run out the door.

Netera Landar
Posted by Bixyl Shuftan at 6:00 AM