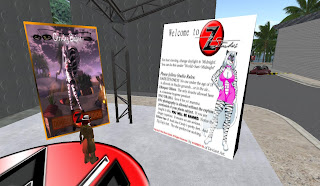 “The Hideout” is really the nicknames of the nightclub there, the sim also being called “ZZ Studios Zin City.” But it has a number of locations. Next to the landmark I was given at Static Nightclub (113, 119, 25). to the north was a zombie maze. To the west of that was a "Strip Mall" with some goods for sale, none at the time I visited were adults-only items. Next to that was the movie theater. Further west of that at the edge was the nude beach, with a fishing pier to the southwest. to the east was a city park full of trees, with a number of cuddle spots here and there.

Around the north, south, and west edges are urban buildings, with both cuddle spots and secret hideaways where couples can do more than just cuddle. On the south was one noticeably tall building, the new Club Stripes, where one could dance to music, or watch the poledancers. The tallest of the buildings is the ZZ Studios office building at Static Nightclub (224, 92, 25). It was there ZZ Studios owner Cindy Babii invited me over to talk. 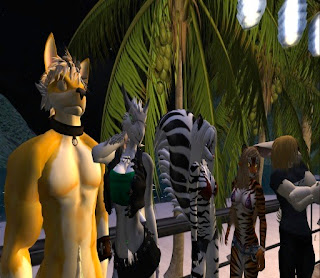 Cindy commented she couldn’t help but notice the new office building was larger than the entire grounds of her company’s first location in Second Life. She told me that she had been offered the sim about a month before. Since then, she had been busy setting up the place, “working on a 17 hour day,” with help from her team, “Kehf, Rhin, Kris and Kaebora, couldn’t of done it without them.”

There were a few pranks going on, “You missed the battle I had with a tank from my rooftop.” Cindy told me about a German WW2 tank that was rezzed, and began moving about creating mischief, “tank drove up to my front door.” She then whipped out a huge anti-tank gun shown in the interview from months earlier, “he drove to the beach trying to get a shot on me after I bounced his tank all over the place.” The huge gun was never used after that, “just me snipping people with my nerf gun.”

Although Cindy was willing to play around with the tank driver, one thing she takes seriously is the issue of photography. No photographs of avatars within Studio grounds are permitted without the permission of the subject (or by Cindy). The penalty is being banned from sim grounds. 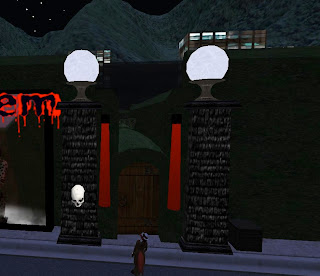 Cindy also brought up the zombie maze. I had given it a try earlier, with a couple others. Free shotguns are provided upon entry, though a variety of weapons can be used. We made our way in, battling numerous zombies and an overgrown spider. Finally we made our way to a manor. Going inside, there was an arcane symbol drawn on the floor, and after some moments there was a flash of light over it, and several demons emarged and attack. Fortunetly, 2 shotguns plus an automatic were enough. Then the spirit announced it had been freed, and offered the players a gift. I got one good only for girls. Cindy told me there were over twenty prizes available, some “custom made by the studios builders,” including “a huggable Thundertank.”

And what of the old ZZ Studios place at Falcon Valley? Cindy told me it was not going to be renewed, “I’m going to miss Falcon Valley.” And recently, the quarter sim it once took up was wiped clean of all objects.

Cindy had plans for the sim’s future, near and in the coming months, “We are working together to make the best furry place in SL. ... We wanted to get some things set, and now that were here we can change things.” She planned to build a bathhouse, “I remember the one a lot of furries hung out at,” thinking it might have been at Furnation, “I think this one closed down.” The zombie maze wasn’t just a one time thing, but there would continue to be holiday-themed and other special events throughout the year. For instance in November, she planned a turkey shoot.

“You ready to be blown away?”

*Addition* The ZZ Studios zombie maze is now listed on the Destination Guide, under the name "Z Mayhem."
Posted by Bixyl Shuftan at 6:00 AM