From Friday October 14th, to Sunday October 16th, Luskwood, one of the oldest communities in Second Life, celebrated it’s eighth anniversary. At the Lusk Tree and nearby Perry Amphitheater, the residents celebrated with music events, and a couple gifts. 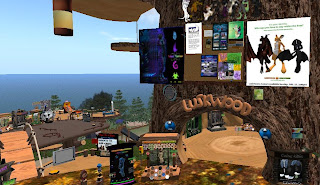 At eight years old, Luskwood is the oldest "Furry" community in Second Life, and among the oldest across Second Life reguardless of genere. Besides being the location of a social area that always seem to have at least a few people over even in odd hours, it's also the location of the first company of avatar makers, Luskwood Creatures. Because of it's longevity and strictly enforced rules against lewd behavior, Luskwood is often the first place in Second Life science fiction and fantasy fans head to after being told about it by friends. Due to it's close proximity to a newcomer entry area, it's also the unintentional first social area of many others as well. Although a few newcomers are a bit intimidated by the residents' non human appearances, all are welcomed except griefers.

Luskwood's celebrations began with what was likely their most noted event, an hour of the musical duo Jaycatt Nico and Frogg Marlowe, better known as “Jaycatt and Frogg” or just “F & J, “ playing on the stage near the big tree at 7PM SL time. From the stage, they played several songs, Jaycatt on the piano and Frogg on the guitar. From the seats, both their mostly human-looking regular crowd and the furred Luskwood locals cheered them on. Afterwards, they talked a little with the audience, Jaycatt jumping down from the stage. Founder Michi Lumin had a little something for him: a “LW8B” (Luskwood 8th Birthday) baseball hat and T-shirt. 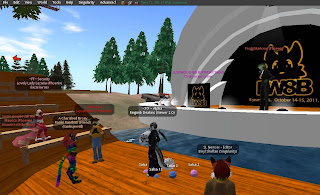 Michi Lumin: We'll likely have stuff on and off all weekend, most of it tomorrow, but thanks as usual F & J. for. doing this for so long. (smile)

Jaycatt Nico: It's been a pleasure.

Reignick Deakins: Glad to hear you every time.

Maurice (maurice.mistwallow): Frogg and Jaycatt should make a sing along blog.

Jaycatt Nico: We love playing here, it's kind of an honor for me. Hehe. ... I normally don't look good in a hat, but this one does better than expected.

Ranlei Random (ranlei.jewell): It's a cool cat hat, so it looks cool on a cat.

Michi Lumin: We kinda made it at the last minute, (grin) people wanted something to wear, heh. 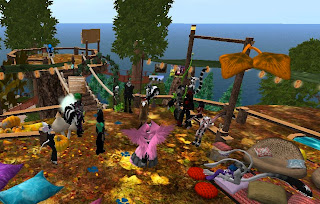 Following Jaycatt and Frogg, Burr Lehane DJed for a time at the Big Tree. On Saturday, live singer Keeba Tammas performed at the auditorium at Noon SL time followed by guitarist Shannon Oherlihy at 1PM. at 3PM, it was constant DJ music by local residents, such as Luskwood member Chippingham Millions. There would be one more music event on Sunday.

In the past, anniversary events at Luskwood would sometimes remain crowded to very late at night. Although late, the Friday and Saturday celebrations did not quite go as late as some. This was anticipated by founder Michi, “This year's birthday probably wont be as eye-exploding as the other years just because, well ... when we hit 10 years, *that'll* be a big one. (grin)”

Luskwood got some praise at the event, a Ranlei Jewell sayin, “I love Luskwood and everything about it. I rarely feel welcome in any one spot for long. So Luskwood’s a haven.” Michi responded, “We do appreciate it guys. We know Second Life is big and, people come through, come and go and stuff, I just hope we have helped some around the grid. And we'll keep doing this as long as we can. ... I think Second Life is growing again a bit; maybe not in population but I think the communities that are here are becoming more solid and meaningful. ... It goes in circles, communities are organisms, they consist of people, people come and go, it takes time for new people find their place in community, so it ‘breathes.’ ... Body count isn't everything though. And, time and place for different things. Sometimes folks are in the mood for head pounding action, sometimes not.” DJ Burr joked, “Sometimes they’re just in the mood for ... (pause) nevermind. (grin)” Ranlei added, “Fads come and fads go. Clubs grow and fade. But communities thrive.”

With the anniversary celebrations over, things at the Big Tree return more or less to normal, as a social area that can be a little quiet, but one is sure to find at least a small group even at odd hours.

“Even if you've got another place that's your home now, you’re always welcome to come back.” - Michi