More Halloween Haunts on the Grid

There is just so much Halloween fun going on the Grid, there just isn’t enough time to see it all, let alone write on it. 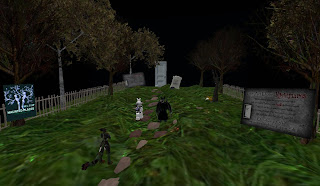 Although haunts are fun to see alone, sometimes the best trips are taken with friends. And one my friend Jasmine Dawn found out about and invited me (and blogger Treminari Huet) to see was “The Art Door Nightmares, at Rendervisions Isle. Near the entrance is a HUD, which the main effect was to distort your vision to make the place spookier, but was probably also needed to hear messages and get prizes.

"Nightmares" was not simply hallways and rooms, but a series of closed rooms accessible by a portal one had to find, which was not always easy. One room had dozens of doors, all alike. Another was an abandoned sanatorium one had to navigate blocked passages and holes in the walls. while looking for the portal door out, there were also a few prizes to find, including a spooky typing animation that went well with my friend’s zombie avatar.The final scene was a graveyard with the names of some of the last people to go through the haunt. The exit led back to the beginning. "Art Door Nightmares" is at Rendervisions Isle (180, 75, 601) 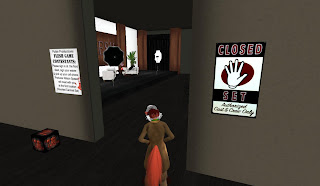 One haunt I kept hearing about was “The Flesh Game.” Taking place in the Pulse sim, one enters the set of a reality TV show, but things are not quite right. To play this interactive horror game, one needs a HUD. If you’re having trouble with attachments due to SL bugs, like I did when I had a chance to see it, the game is incomplete.But for those able to play it, there are chances to get prizes. Several people I talked too had good things to say about this particularly scary game. Plus there was also a thread in the Linden blog about it, with a machinina trailer and several positive reviews by residents.

“The Flesh Game” has a resume of builders behind it, “Developed by the Pulse/Snatch City/Nomine Team,” with the story & plot by Toxic Candy Games (Formerly Vixen Games).To play, go to Pulse (215, 55, 29) 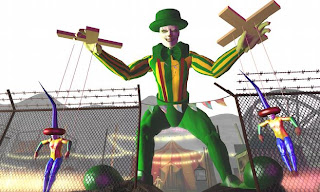 Another haunt I heard of was the Mulberry Horror. It’s not a new place, but was around last year, Sam Nightfire calling it a truly scary fright. It’s back again, “just as dark and gory.” But there are some changes to the “series of bloodcurdling, horrific sites that are so terrifying, you wish you brought a flashlight.” The place has it's own website as well, describing the haunted orphanage with the spirits of "unwanted" children, the abandoned penitentiary with it's ghosts of the most twisted and deranged of inmates, and other places. To visit, head to Club Holland (10, 182, 31).

For more haunts, check out the Destination Guide on the secondlife.com for more. You can also check the Linden Blog for “The Best in Second Life Halloween.”