In January, the Cartoonimals sim, noted for it's virtual critters, amusing gadgets, and other fun items available for purchase, was in danger of closing. In mid-February, I heard the sim had been saved. A buyer had stepped forward and took the place under her wing. 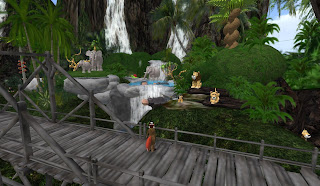 Dropping in to take a look, the place had been changed a bit. Much of the sim was bordered by cliffs and trees, including some picturesque waterfalls, and there was a stretch of beach with crashing waves. And the layout of the attractions and vendors had been rearranged some. But it was still basically the same place, with their critters and whimsical goods still up for sale. Near one waterfall, an elephant stood in the water and hippos were swimming. At the beach, seals were jumping out and back into the water.

While looking around, I noticed a couple people nearby in a building and went over. And there was Duggy Bing, the builder of the cartoonimals and the old owner of the sim, and Ima Flanagan, the new owner of the place. Ima greeted me with a joke, "Hi Bixyl! Lovely avatar you have there. Be careful ... Duggy might make you into a tip jar." After some initial laughter, Duggy Bing told me, "It's Ima's sim now." "I did a bit of rearranging , but not to difficult when you have these great creations to work with. I purchased it , hope to save it. Hate to see this leave SL." 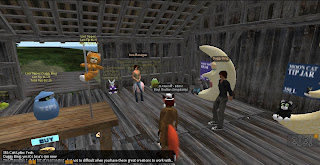 The two were currently working away, Duggy saying, "We're trying to get the stupid messed up vendors to work. The transfer messed things up." "Makes for extra work," Ima told me, then leaned closer to whisper with a grin, "Of course they came back with my name on them. … shhh, don't tell Duggy."

Part of the reason Duggy had sold the sim was he was increasingly busy in real life, "lots of projects." Asking him if there would be any more of his products, he answered he was, "taking a break. It will be a while."

I asked Ima what plans she had other than giving the sim a new look and the vendors straightened out. "There will be a large freebie store," she told me, "not the usual minor items, but many things people need to get started in SL. There will be more stores, but I hope to keep it on this sort of theme. I am not a fan of a sim full of buildings. This is a joy, because these items, play well with landscaping."

I asked them what reactions they heard of the sim up for sale and it's purchase. Ima answered, "One woman dropped by, she gave me an article her friend had written about the sim, and Duggy selling it. She said she didn't want the sim to go. She had a look about and was pleased with the changes. That was good to hear. Loyal fans of sims are sometimes unnerved with changes. She was pleased and was off to tell her friend the sim survived the change."

Duggy Bing was happy at how things turned out, "I'm delighted that Ima Flanagan agreed to take over Cartoonimals sim. She is a longtime freind, and a creator who has built some marvelous environments. She's the perfect person to not only maintain Cartoonimals, but also reinvent it as a whole new experience for SL residents to explore and enjoy." Ima considered it fortunate for her that she was able to get the sim, "I'm the lucky one." 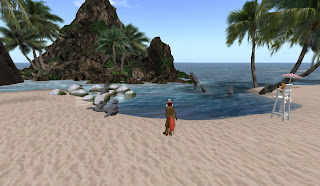 Talking a little more, Ima did have some plans for a social center where people could hang out. After saying goodbye, I looked around a little, and away from the main area saw a small deck next to the beach, animated by waves crashing onto the shore, and the silence interrupted by bird calls.

And so the sim built around Duggy Bing's whimsical creations continues under new management, and with a slightly new look. It should be interesting when Duggy is ready to resume making new goodies once again.