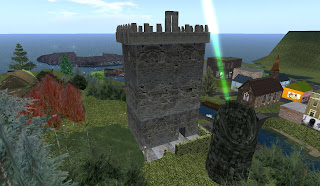 For those who haven't had enough of St. Patrick's Day, or feel like a trip to see something Irish, one place to go to is Castle Blarney. And yes, the place is home to Second Life's own Blarney Stone. The build is located at O'Hare's Gap in the Wilde sim at (150, 110, 33).

For those who don't know, Castle Blarney, about five miles from the town of Cork Ireland, is a popular tourist destination. People go there to kiss the Blarney Stone. Legend has it whomever kisses the stone will be granted the gift of gab (or be "full of blarney"). A scroll near the stone (and the teleport point to upstairs) states the following from Irish bard Francis Sylvester Mahony: 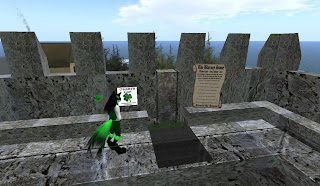 "Tis there's the stone that whomever kisseshe never misses to become eloquent. Tis he may clamber to a lady's chamber,or become o member of Parliament. A noble spouter he'll sure turn out, or an out and outer to be let alone. Don't try to hinder him, or to bewilder him,for he is a pilgrim of the Blarney Stone."


Getting to the Stone is simple enough. One takes a teleport to the top of the castle, walk over to the stone, and clicking on it to lower one's avatar to bend down and kiss the Stone. If one teleports back down and exits the building on foot, one gets a reminder that a certificate of one kissing the stone is available. One clicks on a sign near the doorway. 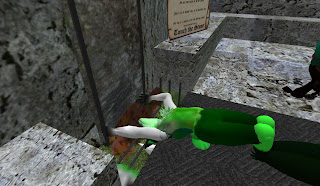 The real Blarney Stone besides being a popular tourist attraction is the subject of legends and even modern fiction. Wikipedia mentions one legend of the builder of the castle being involved in a lawsuit appealing to the queen of the fairies for help, and is told to kiss the first stone he sees in the morning. He does, and wins his case. He then takes the stone and makes it part of the parapet of his castle. Another legend holds the Blarney Stone is actually part of the Stone of Scone or Coronation Stone used in the coronation of monarchs in Scotland and later Great Britain. Another was of Queen Elizabeth requesting an oath of loyalty to retain the land, and the castle's owner responded with subtle diplomacy and promises. Elizabeth proclaimed he was giving her "a lot of Blarney."

The ritual of kissing the stone once needed assistance from someone to hold the kisser's legs while he or she lowered himself, as it was possible to fall from the height. A "Sherlock Holmes" radio program had the sleuth investigate a death in which a man fell while trying to kiss the stone. It turned out his boots had been greased and he slipped from the assistant's hands. Today, hand rails and protective bars make kissing the Stone much safer.

For anyone going on a date for two to the castle, there is a nearby village to stroll about in as well as the countryside. Or one can teleport to Dublin and head to the Blarney Stone pub. Whether or not kissing the stone can make one better at talking up to making a casual date to a hot one has yet to be determined.
Special thanks to Jasmine Dawn/Orasine.