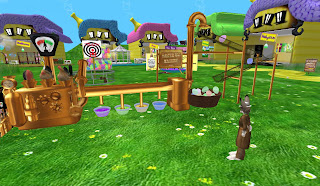 I was able to see a few Easter events this weekend. There were a number of small events, mostly egg hunts of some kind. But the biggest show was probably at "Easter Town."


"Easter Town is a holiday destination that dips you in colorful happiness, visual wonders and experiences sweeter than a chocolate bunny. Ten talented designers have come together to sell an eclectic range of original items. Combine this with egg hunts, peep races and other holiday activities, and Easter Town is an panoramic explosion of holiday joy."

Dropping in, it took a few minutes for most everything to rezz due to the crowd there. What got my attention about the people around were the several child avatars around, "Look, the Easter Bunny!" Hopping around in a circle were a "BugsBuny Resident" and a "BabsBuny Resident," in avatars resembling the cartoon characters. I never found out if they were part of Easter Town, or a couple alts made by a visitor for the holiday. By clicking on the "Bunny Hop" cube in the middle, one could join them.

The place itself had a cartoonish style, with the stores made with crooked windows and colored roofs. There were also a number of whimsical exhibits, such as an Easter egg machine that cranked out colored eggs factory style, and one of the Easter Bunny after apparently having over-indulged on his candies until he had a bellyache.

There were a number of freebies around, such as a bouncy ball one could sit on and bounce around on. There was also a freebie "egg avatar," which looked strange and hilarious with eggs with human heads walking about. There was also a basket for an egg hunt going around on the sim. Looking around, I found only one egg.

Some attractions one had to pay to play, such as the Peep Race. The stores themselves had a number of Easter-related goods for sale from clothes to jewelry and more. But one didn't have to spend money here to have a pleasant time. The freebies and cartoony atmosphere made the place well worth a visit.