One of the things I love about SL is its ability to expand the reach of the real-life world.  Glendale Community College, a small college located in a suburb of Phoenix, is using SL in just that way.  It is reaching far beyond its geographical limits through its facility at Mountain Preserve, GCCAz (74, 159, 34). 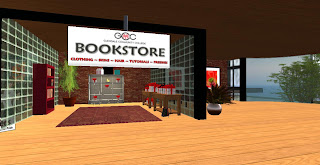 There are two parts to the SL Glendale Community College.  The Mountain Preserve site is a typical student center with a bookstore, coffee bar, and some comfortable seats for crashing and studying.   The Bookstore has some freebies to help newcomers, such as skins, shoes, hats, and other items.  There may even be a few things that older residents have missed.  I picked up a small stack of books for $5L to make my study look like I use it.
Outside, the area is a restful retreat.  It has a nice fountain, flower gardens, and a great ocean view.   There are a few other buildings that may be used as classrooms, too.  The large Communications Lab was locked, but there were candles burning inside, and it was nicely decorated. 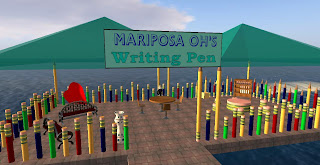 On the beach was Mariposa Oh's Writing Pen.  The Writing Pen is the creation of one of the real-life educators at Glendale Community College.   It’s a fun place to get inspired to write.  Colorful pencils form a fence around the patio that keeps the student writers from diving into the water for a dip with the dolphins.   Mariposa Oh has been a SL resident since 2007.


The second part of the college is an interactive Spanish village, located at La Plaza, GCCAz (65, 90, 24).   La Plaza is the creation of SL resident Calisto Encinal, who is James T. Abraham, Ph.D.  in real-life.  His profile states that Dr. Abraham is a professor of Spanish at the RL Glendale Community College. 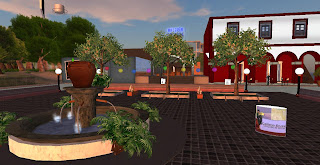 The Plaza is a colorful, fun place to practice Spanish or simply enjoy the culture.  In the center of the Plaza you can pick up a HUD to help with all of the features of La Plaza.  The colorful buildings are based on the types of shops that would be found in a typical Mexican city like San Miguel de Allende.  There’s a pharmacy, a restaurant, a market, a bank, and a hotel.  In each location there are signs that give out information or let you play learning games with the Spanish vocabulary.     I thought the pharmacy was the most difficult to use because the vocabulary of symptoms and illnesses is hard.  The market was much easier for me.  Be careful at the bank.  If you don't write the correct Spanish word for “money,” they might call la policia. 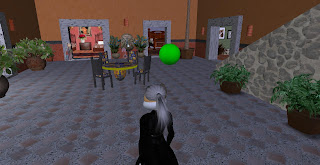 “Mi Casa es Su Casa” is the most ambitious of the builds created by Calisto Encinal/James T. Abraham.  The large house is labeled with the Spanish word for most of the items located inside.  It asks you questions about the items, too.  In order to progress through the house, you need to write the correct Spanish word in the chat. The green ball in the center of the house controls the games.
The Plaza and house are a great use of SL to teach a foreign language in a fun and entertaining way.  Dr. Abraham received a grant to build Mi Casa Es Su Casa, and he was able to expand it while on a sabbatical.