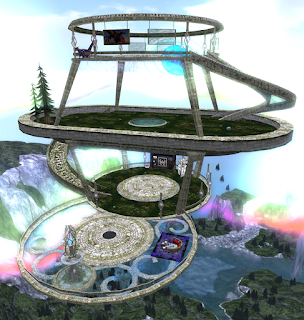 Recently at club Cutlass, we had a big Dj spinning tunes. By big we mean, he was a huge dragon, named Geerkil, that could barely fit in the club. Sha told Geerkil that Katzu had recently done an article about dragon sims, in the Newser.

Geerkil asked her to extend his invitation to Katzu to come visit and report on his own favorite, new dragon realm, Ever Wing, on the Commune sim in the far NW corner of the grid. On hearing the news, Katzu buffed all his claws and horns, picked up and rubbed a local bunny under each arm, and flew off to Ever Wing. His report follows.

The landing point at EverWing is a large, flying, three level platform, which is known as the Lounge. This is also where the dragons have their big social gatherings. The Lounge can hold many dragons, much larger than myself and it even has a set-up for DJs. I noticed the sim was playing Geerkil's music channel and that added to the pleasure of the adventure. 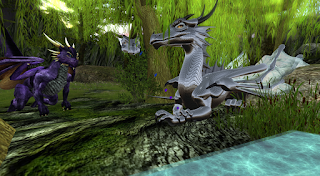 In the center of what I called the dance floor, there is a teleport with five destinations on the sim. I tried all of them and was amazed at how big one sim can look. Each destination is at a different altitude on the sim. Each area is rich in mountains, trees, waterfalls and lakes, but thanks to "off sim" backgrounds, look like the scenery continues in eight sims surrounding you. So far, the music and scenery alone are making this a great place for a dragon to stretch his wings.


At one level I spotted a pair of large dragons, stretched out by a lake. Being new here, I approached with caution. They welcomed me and, when informed I was writing about the sim, were open to answering my questions about the local dragon life. The dragons each have a human size, which they use when being more efficient, building things. What do they like to do, in their spare time? The shiny metal dragon explained that they all liked tweaking their dragon av mods. This fits right in with all the furries, back home. As we talked, he worked on his latest head. It was kind of like watching Sha, building at her workshop. I seem to have been there at dragon dinner time, as each of them excused themselves in pursuit. I took off to view every bit of the place that I could. One of the things I've observed in my dragon adventures leads me to a new theory. We have all noticed that time seems to run at a different speed in SL, from that of RL. I think dragons have a whole different speed of time. I'm not sure if it's faster or slower, but.....dragons.....do.....not.......scurry.....very..........fast. 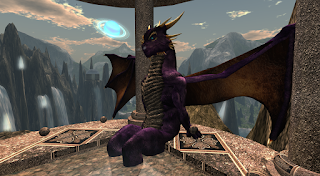 Every area I visited was beautiful. Rather than repeat the same list of superlatives, I will warn of the one, minor mishap that I encountered there. I was flying in one of the lower areas and turned flight off to land. My aim was off and I landed in water. After seeing how nice everything looked, above water, I decided to walk about below the surface, to see if the designers carried the details there. I found a cave entrance and decided it was only natural to explore inside. Well, it turned out to be closed to the public and a security orb sent me back home. Lesson learned, I went back to EverWing and explored some more.
You don't have to be a dragon to enjoy EverWing. The atmosphere is very relaxing and the scenery provides countless backdrops for photos. This is one LM that I will use many times.
Commune (116, 217, 259)
Your scaly friend,
"Katzu"
Posted by Bixyl Shuftan at 6:00 AM