Blast From The Past - Bleu Ruse Cafe 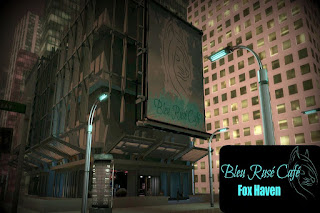 Back when I used to work at Fox Haven, there was a little cafe called the Bleu Ruse Cafe which was owned by Arcee Redclaw. It was a nice place to sit and chill and a great alternative to the bumping night-life of the club on the same sim. There were live performances and DJs, but it was much more relaxed than your typical Second Life club. The hosts were actually bartenders. The decor and atmosphere reminded me of a southern restaurant or bar and the staff were very hospitable. It all had a southern hospitality vibe to it. I loved hanging out there and I missed it so much that I asked Arcee to put a mini version of it on my current parcel. The cafe itself went through many alterations over the course of nearly three years and at one point there were two of them; one at Fox Haven and a bigger version on the emergency responder roleplay sim called Rochester. 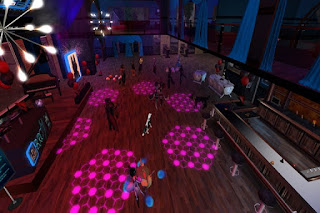 I had a chance to sit down with Arcee and talk to her about her previous ventures with her cafe. When asked what inspired her to start Bleu Ruse Cafe she told me that it first came about because of an opportunity at Fox Haven. “When I first joined the community of Fox Haven there were a few empty buildings which the staff offered up for personal storefronts or places to relax. I’ve always wanted to run sort of. . .a cafe or small lounge, so I took the opportunity to do so. I turned it into a small lounge where people could play Second Life instruments or DJ and it grew from there.” She says that the growth of the cafe was thanks to community involvement. The French naming scheme originated from her French background. “Bleu Renard Cafe was a bit. . .weird. . .so I went with Bleu Ruse Cafe since it rolled off the tongue better. So, in a way, it’s ‘Blue Smart Cafe’ when translated properly.” The color scheme was inspired by the blue fox avatar that she originally used at the start. She still has the avatar saved in her inventory to remember things by. 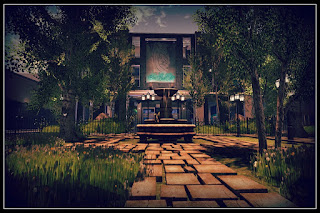 When asked what she liked most about running the cafe, she told me that it was the connections that she made. “I met many of my closest Second Life friends through them finding their way to the place or through the ones who helped it to grow and thrive. I would have never imagined meeting all these folks. Every time Bleu Ruse Cafe is brought up, people tend to have fond memories of the place.” She feels like she did her job at making a fun and relaxed venue and I would have to agree. “BRC grew in a way that was unimaginable and astounding and it was never because of the amount of funding that I put towards it or the hours I spent remodeling. It was the patrons and the staff that made the place come alive.

It was a community, of sorts. From Ace Redclaw being my Security, Midnight Galaxis being my General Manager, and Raff aiding me with the DJs; it was thanks to them and the loyal patrons that BRC lasted as long as it did. With the closing of Fox Haven as well as Rochester, Bleu Ruse Cafe closed with them, but it’s memory as well as a smaller form on my parcel lives on today.