Opening of Sansara Embassy, and Tour 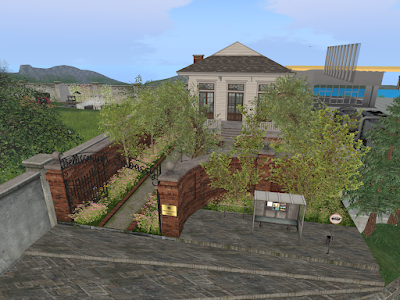 The Embassy at Sansara opened at 12 noon with the ceremony of the handing over of the Key by Abnor Mole and his almost usual speech. The Honorary Ambassador. Yukiko Yeshto took the key and immediately took over the regions with a bang! 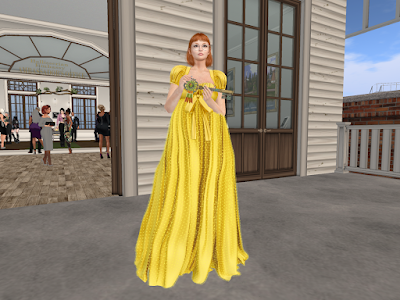 Her words,” Sansara is the oldest mainland continent with a rich history, many diverse places to explore, and active communities of which some exist since the early days of SL. Those of you who know me already, know me also for my hosted tours. Which all comes from one of my biggest passions: exploring.” Later when I spoke with her she was already planning a horseback tour for February. 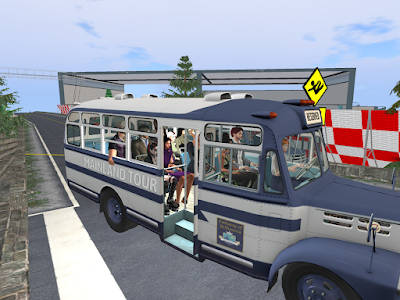 There was not a usual formal party, which I love of course since I get to wear one of my gorgeous gowns. Fortunately we were warned in advance, so we did not wear formal gowns and tuxes. Out front of the embassy on the road were three buses to take us for a riding tour of the area. I did wear a dress with heels however and realized as we went on our way it was not the best choice. 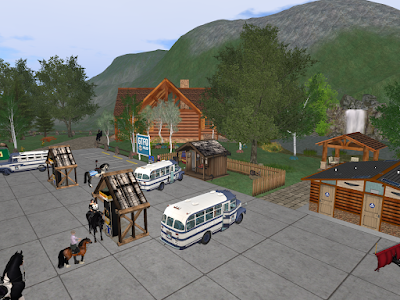 Yuki is a marvelous driver and knows the routes so well. She took off going not too fast and the other buses with their drivers, BÓÒ (Boo Rojyo) and Ambassador Freddie Harrington (Madonna666 Resident who were driving the other buses tried so hard to keep up with Yuki. I assume not being as familiar with the routes it was not easy keeping up.We made rest stops several times to get visa stamps for our passports as we crossed region after region. Good thing some grabbed snacks too. The usually 20 minute ride took almost an hour to complete. It was so much fun! 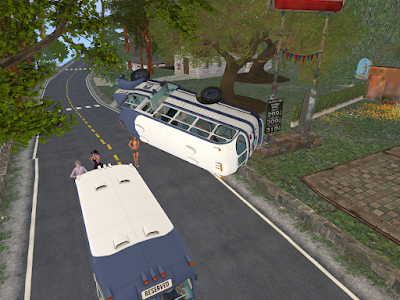 I rode on two different buses as we went along so experienced several crashes both of drivers and buses! There was a lot of chatter and laughter and no real injuries. There was a mounted contingent with us, and one cart pulled by a horse driven by Eliza Exeter (Ravynmaniac. 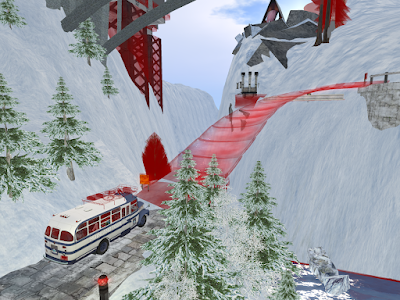 Our final destination was the snow areas of the continent. To get there took courage on the part of the bus drivers and also the equestrians. At one point we had to cross an invisible bridge . I really must go back to see who was the creator of this disaster maker. (I did and it was Garden Mole!!!) Several people fell into the deep ravine below but were saved. Half way down the side of the ravine was a giver of Gospel Tracts. I can see why. 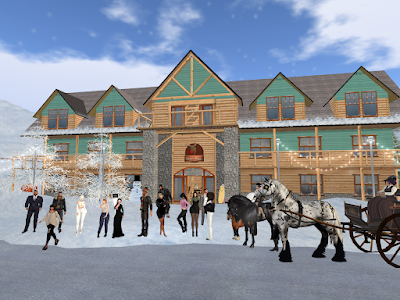 We reached our final destination, the Chalet Linden . Once there those of us who survived the harrowing journey dismounted machine and horse and stood to have our pictures taken in front of the Lodge. Then we walked over to the lift that took us to the top of the mountain. 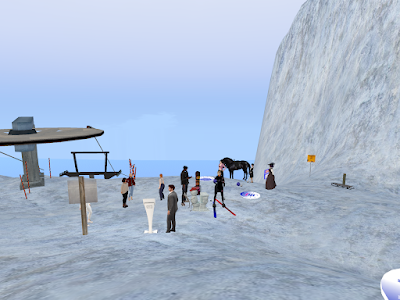 Now I wished I did not have my heels and dress on so quickly added leggings and boots . Here we picked up our last visa stamp and said our thanks to this brave new Ambassador. She is so good to take us on this long tour. I put on the free skis and took off down the mountain. I come here every winter to the Chalet and ski and skate in the area. It is a wonderful area.

To visit this latest Embassy take this bus. It is safe!!! http://maps.secondlife.com/secondlife/Hennepin/182/15/110