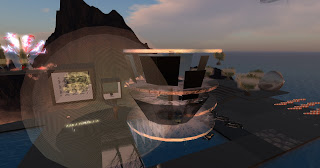 When I logged in recently using Emerald, an interesting photo appeared along with a tempting note: “Visit Syncretia”. Clicking on the button was like rolling the dice, but I’m glad I took a chance.

Syncretia, located at Syncretia (134, 213, 21), is an interesting mix of futuristic steampunk, colorful particles, and Mother Nature. When I first landed there, it began raining. This was different and interesting because there aren’t too many sites in SL that rain. But no worries -- I was ready with an umbrella that I had been given at a recent event.

The sim is the playground/classroom/home of Alpha Aurer. In real life, her counterpart is a professor at Sabanci University, a private university located near Istanbul, Turkey. In the past Aurer has used the island as a sandbox for her students, and she intends to continue doing so in the future. She has done a great job of bringing in a lot of unusual items into her world. Some of the items she has created, while others are purchases, finds, or gifts from friends. 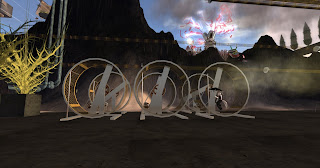 The first part of the site is the most interactive. A series of golden Hamster wheels made by Arcadia Asylum invites you to "help power the SL grid". Fun! After a bit of exercise, I left those to check out some other items that were at this end of the island. I avoided the green "stationery nuke", which didn't appear to do anything but was nevertheless intimidating to this peace-loving Foxette.

At the northeast corner of the island I climbed into an Old Cargo Crane, also made by Arcadia Asylum. The view was fantastic. Getting in and out was a bit of a trick, however. Let’s just say it involved a lot of sitting, flying, and ultimately a dip in the water before I landed back on dry land. I was glad I was exploring alone!

A little further back on the site, there are floating platforms and lots of plants and animals. I found two animated swans floating in the water and Alpha’s horse, Gamma, standing nearby. Lots of hydroponic plants decorated the area, too. 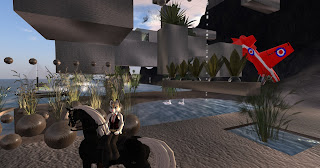 I couldn't resist "boarding" the Red Fox Arrow plane that had nosedived into the ground nearby. When I clicked on it the option of “Board” appeared, so I did. Suddenly I was upside down inside the plane—which is a place you only want to be in SL. This build was made by Fox Tweak and owned by Wolfgeng Hienrichs. Wolfgeng’s profile message says, "Sorry if I left my plane on your property. I probably crashed. Especially if your parcel is full and on a simborder...". You have to love a sense of humor in SL. I laughed, too, until I discovered that I really couldn’t get out of the plane. Wolfgeng! Suddenly I "died" and was automatically returned to my home. Another first for me in SL.

But this reporter is not so easily defeated. I soon returned to Syncretia, determined to get my story.

At the back of the sandbox there were more planes, including some more crashes, but also a nice yellow Piper Cub-type build. There were lots of particles here and some wind turbines. A series of steps led to some futuristic buildings, too. I could see what appeared to be a couple of residents, but I couldn’t get either of the residents to make contact through the chat. Perhaps there was a language issue or maybe they were hard at work. I didn’t want to interrupt any high-level learning, so I didn’t go inside any of the buildings. Instead I walked around Syncretia, viewed the colorful particles, and enjoyed this creative and fun location.