During Press Day, I had a chance to take a short guided tour of some of the exhibits of the Second Life Ninth Birthday area. So I joined up with a group that included Saffia Widdershins of Prim Perfect/Designing Worlds, and Ginette Pinazzo, noted for organizing the Zindra Expo, whom publishes the Zindra news blog. 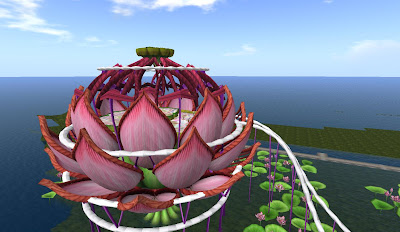 "Hi Bixyl," Ginette greeted me, "Welcome to the Lotus Lounge." Saffia offered me a press pack, and I took note of my surroundings. We were inside a huge flower blossom, in the northwest part of the birthday area, in the "9" that was in both the DreamSeeker SL9B Iwa, and Dziewiec sims (check the map Here). The Lounge itself would host some live music events the following day. 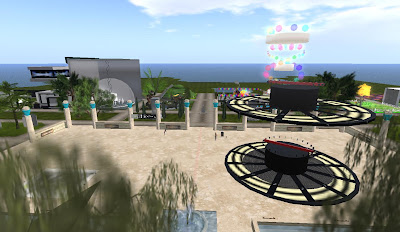 From there we traveled to DreamSeeker SL9B Devet  where the west half of the Welcome hub was, the east on the Nove sim. There, I found a HUD that could teleport me to each sim at the SL9B region, often at specific parts of a sim (north, south, east, west). Thinkerer Melville wrote of the HUB structure (the black cylinder), "The Hub offers you landmarks to remote destinations affiliated with SL9B.   Stand on the inner part and see the entire set. Each destination shows as a sign above a black walkway (but only if you are close to the central hub.  Look for a landmark button on the walkway." 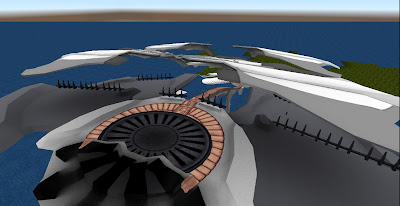 Next was the Lake Stage in Frolic, which Saffia told me, "this stage is completely mesh." Unfortunately as the picture to the left shows, my Singularity viewer wasn't able to process the graphics. The picture above is courtesy of Daniel Voyager. Frolic is one of two water sims at the SL9B area. Ginette told, "and of course, being stage, plenty of events here." "The schedule is now appearing on the blog," Saffia added, "Thanks to Crap (Mariner)." 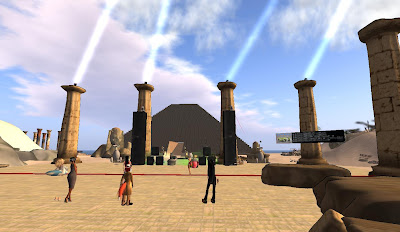 Next was the Egyptian Stage at Shindig, the other sim in the Egyptian area being Kittycats SL9B Partytime to the south. Ginette told, "now this is a great area, and it also will be an area where the Treasure Hunt events will start from. Of course, there is a stage and events here." David Abbot commented, "I've spent a lot of the last week here - it's amazing. ... The hunt is set up to run over a week - with one clue being released per day. They'll be posted on the blog and a notecard version will be available at the Happy Hunting stand. It's set up as a diary, written by a 1920s explorer who... well, he gets a little confused by the sound system for starters..." 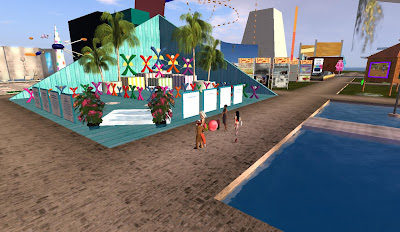 Lastly, the group headed to Jamboree, which Ginette called, "just one of countless areas in SL9B that is filled with very well done exhibits." We appeared next to the Virtual Ability exhibit. 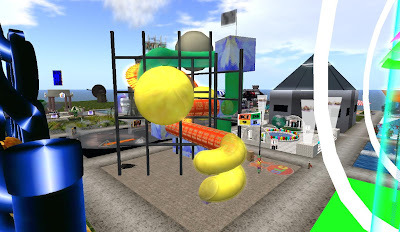 A little further away in Jamboree was the Second Life Kids plot, which was made up of an avatar-sized jungle gym. 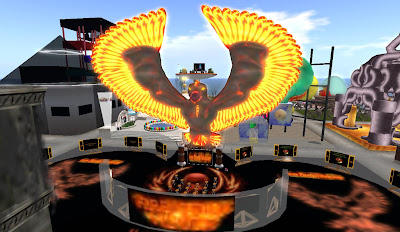 And the exhibit from the Phoenix Viewer team. The main feature was of course an animated phoenix which moved it's head around and flapped it's wings a bit. There was seating there, which gave the impression of discussions to be held there later.

Ginette's final words before we parted were full of praise, "This is a potential turning point, in my mind anyway, for Secoond Life, if the residents do it right. And I really feel they will."

Callie Cline of KittyCats commented, "it's been exciting!!! To see the community charge full ahead and pull this off, with no drama that I've seen, really great support, enthusiasm, and a 'can do' attitude has been so great to witness. I'm floored by the amazing pool of resources, talent, patience that the community has."