Going About the SL9B

This week has been a busy one for me. Events in real-life have taken up much of my time. But I still have a little time to check out the Second Life Ninth Birthday area. On Wednesday June 20th, I took a look at a few exhibits around. 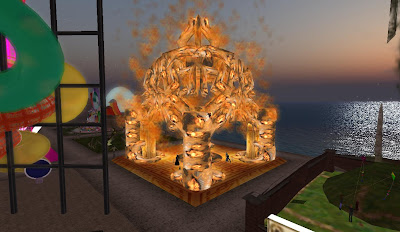 Earlier on Sunday June 17, I had a look at the Jamboree sim. Going about on the 20th, I heard about the Burn2 group having an exhibit there, and it was set on fire every sunset. So when I heard it had been set ablaze, I headed over. 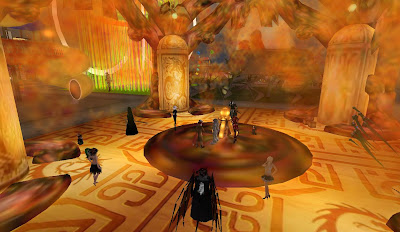 Burn Temple: Greetings, (name). The Temple burns each Linden night shortly after sunset, approximately 11:30, 3:30 and 7:30 a.m. or P.M. [SLT].  The temple reappears in daylight. Please take a gift. Listen to the stream.  Let the temple sing to you.

Two gifts were available for visitors. Crap Mariner, as the "Prim Reaper" was there, "I hope you had insurance," lighting his cigar with the flames. One unusual feature was the temple didn't play music at random. but gave each avatar "his own" song and played it. 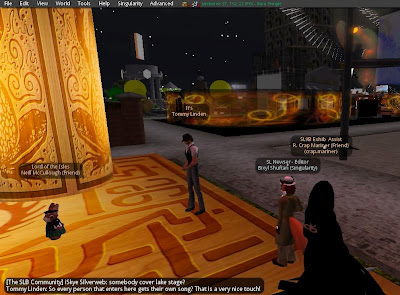 To my surprise, among the green and yellow dots on my radar, there was a blue one. And soon the others saw him too, "Ohhh, a Linden." And a Tommy Linden walked over, "What is going on here?" Toady Nakamura answered, "This is the burning temple. It incinerated each 'Linden' night, and then vanishes 'til sunrise, when it reappears. We are trying to light the world on fire for SL10B." Tommy Linden looked around, "Interesting! It is very nicely done! ... So every person that enters here gets their own song? That is a very nice touch!"


I asked Tommy Linden, "How are things at the SL9B?" "Things are great!" he answered, "I am enjoying checking everything out when I have time." "Did you have anything to say to the readers?" "Um, nope, just that everything I have seen so far has been so beautiful! Everyone did such a great job on their builds!" "Any builds that stood out in particular?" "All of them, I couldn't really pick one over the other, each one is unique in its own way and worth seeing."


Later on, the Burn exhibit was mentioned in SL9B group chat, and when it was mentioned Tommy Linden was there, one girl blurted, "Oh, emm, gee! He is hot!" She then paused, followed by, "Did I say that?" and clapped her hands over her mouth.

Looks like despite the bad press the Lindens have gotten, at least one is still getting complements. 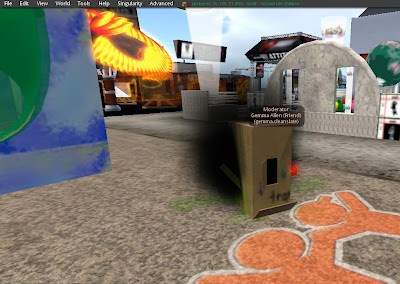 Following the Burn2 exhibit, I saw Gemma Cleanslate by the Second Life Children (SL Kids) exhibit. She had been very busy as a volunteer, and was relieved someone else was writing something about the Birthday during the festivities. Our attention was drawn to the cardboard "transmorgifier" left by the SL Kids, which offered to turn anyone going in into a kid avatar. So Gemma tried it out ... 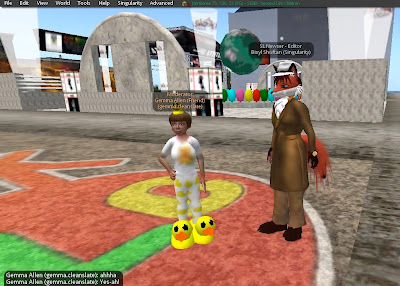 And she ended up changed to "Young Duckie." She had a good laugh over it, "WaaHaHAhahAHA! AhhhhHAhahhAHhahHAH! haha!"

After a few minutes to relax as a kid, it was back to virtual reality, and she had to go back to her Greeter duties. And I headed to the Auditorium in the northeast corner of the SL9B region in Negen. 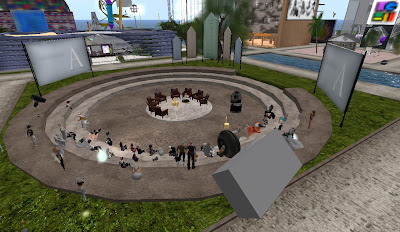 At the Auditorium at 12 Noon on Wednesday, Qarl Fizz, the former Qarl Linden was taking questions about his Mesh Deformer and mesh in general, as well as other subjects, from Saffis Widdershins and the audience. 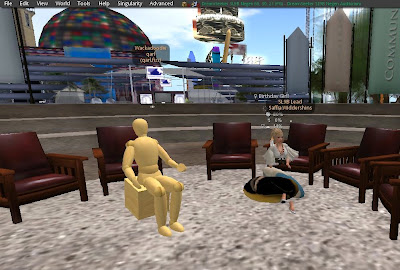 Asked about "Kickstarter" style fundraisers to get cash infusions for projects (one that made the news earlier was "Jazz Paws" from Raglan Shire), Qarl stated he liked the concept, but "I feel there'll be blowback when projects start to fail." Talking about his working with Linden Lab as an independent, he told that he just couldn't get them to do certain things. He did like working with Third Party viewers as they were more willing to experiment with new techniques. Still, "I could kind of understand why Linden Labs was reluctant … every time they changed something, there was a 50-50 chance people would get upset." He commented they might feel a little scared and intimidated by the community of residents, "outnumbered and they have more money."

"Second Life isn't Linden Lab at all," Qarl commented, "It's us. If they shut down tomorrow, we'd move somewhere else."

Of Qarl's simple wooden puppet appearance, someone in the audience asked if people offered him textures. He laughed, and answered it's happened a couple times.

Asked about his future, Qarl answered he was looking for something else to "catch my fashion." In the meantime, he was giving classes.

The SL9B continues on to Sunday evening to the late night fireworks. On Monday, there will be no more events. But the exhibits will be up for a few more days for those whom were held up by real-life events earlier, or residents who find the lag from so many avatars to be just too much.