By Grease Coakes
Second Life has endless ways to make use of a sim. You can have a rocking dance club, or others use a sim to hold prayers and build an ashram or church. Native Americans use a sim just to hang out at and express their culture and heritage. Another way to use a sim is for fun filled combat. Had a bad day at work? Blast your friend’s head off with a submachine gun, or even better use a bazooka. 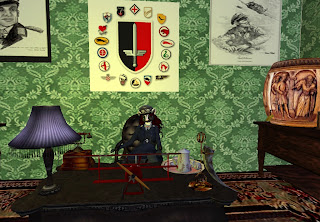 Vickster Khun created a combat area in a sim owned by her, New Bastogne, which recreates a World War II environment based in France during German occupation in 1944. Nydia Tungsten and JessicaBelle Dayafter gave me a tour of the sim in a 1940’s armored car. When I first warped into the sim I saw a realistic room like a 1940’s office. Walking out, I was in an underground bunker. Jessica was a Lt. Colonel and Nydia was an under officer as a 1st Sergeant. Nydia played as her attaché being the driver while Jessica explained everything.
As I was in the back seat I saw destroyed buildings and old posters and cafes in giving the player or myself a historically accurate and terrible war like environment. The builders behind the sim did a great job in creating a realistic World War II recreation. In fact Nydia ran into an old style lamppost on purpose and it actually fell over and the same with chairs and table on an outside café. 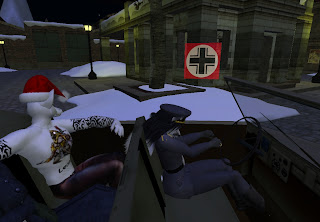 There are also sewers to go underground if you wanted to be sneaky and not be in direct combat. The goal of the sim, or rather the combat, was to capture flags and change them to your faction or nation. But of course as a combat sim you need firepower to overwhelm those nasty Germans, or you could be playing as the Germans trying to take control of Europe.

Nydia and JessicaBelle showed me where to pick up weaponry and a uniform so I’d be ready for battle. When I got the hang of it, I shot Nydia "killing" her by surprise. Sadly for me she came back and killed me several times going around the sim in fun filled combat. The combat scripts you put on only give you 25 hit points and allow you to put a flag above your head to show you’re an American or another allied nation. The low hit points add realism to the combat sim. Instead of taking 20 bullets before you die you can only take a shot or two before you die and respawn. To not be offensive the German sign is a red field with a cross, not the infamous Swastika used in Nazi propaganda. 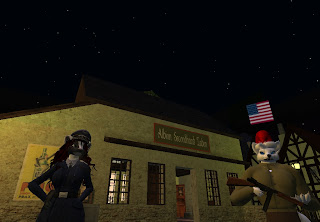 A SMG isn’t for you? Well good news, there’s more. Unlike the first person shooter "Team Fortress 2" where you can pick a class to use certain weapons you stick with the basic rifle, however you can still use bazookas you just don’t start with full ammo like the solider in TF2. You have to pick up ammo crates to load your bazooka. That way not everyone is going around German occupied France with a bazooka you have to earn it by grabbing the ammo crates.
There are also vehicles to use as well to blast other players. You can grab a tank or even a fighter plane to blast away with. The tank gun made holes in the ground with a fiery after-effect and a sound effect of voices yelling German commands to fire. The plane itself was tricky to fly and I crashed into the sim next door. I had to laugh at myself in good fun.
JessicaBelle Dayafter wanted to show off the sim she likes roleplaying in and she wanted to vent some frustration at a group of people abusing the sim by bending the rules and not playing fair. Like Blizzard’s game "World of Warcraft," lots of players picked one side overwhelming the other faction. The game loses fun when this happens, in Jessica’s words. In fact when I brought up WoW she mentioned a lot of these unfair players may be also WoW players.
JessicaBelle Dayafter: “And all too often people would not use common sense of fairness. Like if you are fighting 3 enemies, coming over with 12 soldiers and 2 tanks is wayyy overkill, and totally unfair.”
Also people can become abusive getting too seriously involved in the sim. JessicaBelle Dayafter told me,  “Going back to the topic at hand of insults (sort of), another thing that drove many people off, is certain people take their RP waayy too serious, and bordering on being down right offensive/breaking rules of conduct set in place by LL.”
As an officer, a Lt. Colonel, JessicaBelle tries giving orders, however her orders are often ignored by the other players. So by those upset by the cheating players she suggests going to LL to complain. Part of the problem is however is the managers and owner of the sim aren’t always sure what to do and her suggestions fall on deaf ears. I used the analogy of the NFL how when refs make bad calls against the home team you’ll hear boos resounding from the stands.
JessicaBelle Dayafter, "Some examples of shenanigans: spawn camping gathering large a large amount of troops, and waiting within line of sight or right outside the spawn areas, so anyone trying to re-enter battle gets massacred. A lot of it too was slinging insults to each other in combat, and not in a playful/meaningless way."
Sounds like some people want to ruin the game for others and bend the game to their will beyond reason and cheat. Which is sad when instead of enjoying the WW II sim in a fair way, they made the sim not fun anymore. This is just common sense or something you learn as a kid that other people do not like it if someone else cheats or plays a game whether a video game or a board game in an unfair way. Or if someone is winning by roll of the dice or just good shooting not to take offense and be a sore loser. That’s something to be reminded of in the holiday season when fairness and kindness show good holiday spirit.
Check out the WW II sim when you get the chance readers of the Second Life Newser I had a fun time goofing off with Nydia and JessicaBelle.  That’s certainly part of the Christmas season just having fun.
Grease Coakes