By Grease Coakes
When people think of Easter a lot of people think of the Easter bunny and chocolate. For religious and spiritual people the death and rebirth of Jesus comes to mind. What Shockwave Yareach of the sunweavers had in mind was one of his fun mazes. Instead of you eating colored eggs from those egg coloring sets you played with as a kid, Shockwave thought what if the eggs ate you? 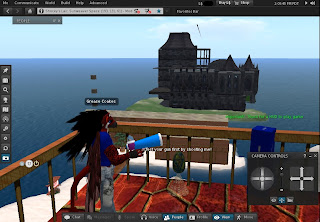 Shock to celebrate the Easter season instead of making Easter bunnies created an excellent maze based off the "Alien" movies with Sigourney Weaver. When you warp to the LM that Shock gave out in the Sunweavers notice, you see a massive building shaped like a long rectangle. Click on the nearby square to get your HUD. There’s an egg outside the maze to shoot at to make sure your gun works.
Picking a gun at random, I found a plushie gun I bought year ago and forgot about. I told Shockwave this and here’s what he had to say: "Kill them with cuteness!"
Apparently it works with the HUD on I get a message saying you have slain this egg it cannot harm you as I hit the dangerous egg with a plushie. When you open the door I hear the star trek sound from whenever the holodeck doors open. The inside of the maze looks realistic as if you’re in a science fiction movie or reading a book. 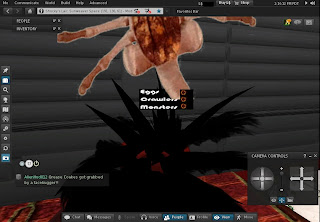 Don’t be fooled however. Even with my deadly plushie gun in hand this maze is no mere walk in the park. Like the NES game contra one hit you’re dead the same is true for Shock’s maze. I’m walking around the maze lalala ... AHHHHHHHH FACEHUGGER!!! And your avatar goes back to the start of the maze with a facehugger on your screen losing your score. Shockwave himself said his wife was getting on him in real life for yelling in terror as his wolf avatar got killed in the maze.
The maze is cheat proof too if you try to walk in without the HUD the door won’t open. So walking around the maze with no HUD to not experience death is a no-no. I said then the maze wouldn’t be a challenge. 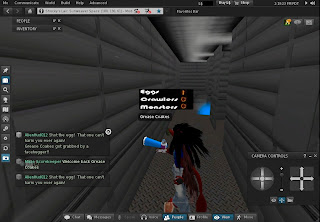 Shock said it’s fun to build in Second Life as to build a real life maze would be way too expensive. I commented that it’s very easy to buy a furry avatar for 800-900 Linden. In real life you would have to build one yourself or pay someone a large sum of real money to build a fursuit to walk around as a furry in real life.
Shock may not have a Hollywood budget in real life to make the next Aliens movie, but he certainly did a great job making a great maze to entertain the Sunweavers or anyone else who likes shooting things. Next time you eat or paint eggs this Easter season be careful that it doesn’t explode and hug your face like when I visited Shock’s fatal Alien maze.
Shocky's Lair, Sunweaver Space (191, 135, 61)
Grease Coakes
Posted by Bixyl Shuftan at 6:00 AM