While on another assignment for SL Newser a few weeks ago, I met Froggy (sanfroggy) a SL photographer whose home is located in eLab City.  She invited me to tour the city, which is located at eLab City West (103, 141, 33).  Froggy took the photographs that accompany this article. 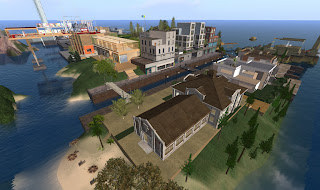 SL resident Professor Lax, who in RL is Professor Thomas P. Novak, started eLab City as a research project to study behavior in virtual worlds.  He conducts his RL academic research at the University of California at Riverside.  The eLab City project began in 2008, and it soon involved over 5,000 SL residents as visitors and participants in the research.    To create the city, he contracted with SL developers to create two regions where a true community of living, working, and playing could be conducted.   Professor Lax, through his RL persona, wrote that “...eLab City’s primary functions were to be a working laboratory and a mechanism for building a subject pool of participants for academic research studies.”
Although the research project has ended, eLab City remains as an interesting urban/university site to explore.  A good beginning point is the eXpress kiosk located at eLab City West (103, 141, 33).    When the research was going on, SL residents could sign up for study panels if they wanted to take part in the research project and earn some Lindens.  Since the research has ended, ignore any of the signs about signing up.  But do step inside the eXpress building and pick up a free messenger bag that is hanging on the wall.  It’s a stylish and free souvenir, and it’s filled with some freebies. 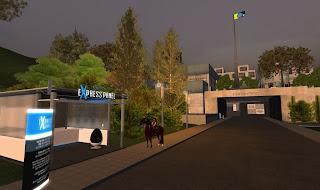 From this point you can get a view of the river and many of the buildings that make eLab City a realistic and fun place to explore.  Inside Building E is the student lounge.  A little grimy, with out-of-date mags, games that don’t work, and a snack shop with lousy service.   Just like I remember my college student lounge.  If you need an old computer or desk, you can pick up a copy of one here for free.
If you go out the back door, you can walk down to the river or explore some of the buildings and shops.  Although there appears to be some things to buy, many of the shops are decorative only now that the research has ended.
On the street level you can borrow a car to drive.  Or take a walking tour.   Since the site allows flying, it’s fast and easy to tour.  There are also a lot of interactive maps that show key locations in eLab City.   A built in teleport system provide quick transport, too.
Like all good cities, eLab City has apartments, shops, gardens, a theater, a library, and places to meet and work.  The Library and Theater can be found at eLab City East (136, 83, 22).   The Library has some interesting note cards about companies that had been in SL in the past.   I was especially sorry to learn that I had missed the Ben & Jerry sim.   I bet they gave out great freebies.    Another display shows books and movies that have a presence in SL and offers a teleport to them. 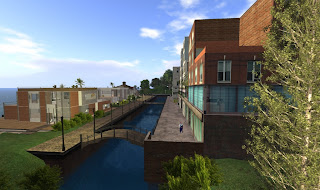 The apartments can be found at  eLab City West (84, 115, 25). The apartments were originally built for the RL students/SL residents who were working on the research project.  The buildings were labeled Building A and Building B.  One of the interesting things that Professor Lax discovered was that the students/residents “quickly displayed a sense of ownership. For example, when the first set of student residents moved in, they changed the name from the non-descript ―Building A‖and Building B --to ―Oceanside Suites North and Oceanside Suites South.”
Most of the office buildings are empty, although they are quite detailed and contain conference rooms, auditoriums, visitor centers, and other space.  An exception to this, however, is the Design Center, located at eLab City East (44, 143, 28).   A collection of animated art work by Peter Stanick, titled “Virtual Virtual”, is on display here.  A note card by Stanick explains the origins of this collection.  “... I decided to put together a program that basically took all of my existing images and generated an animation from those images. ... Basically that program produces an animation, but a secondary function of that program is that it does produce secondary images which are part of this exhibition here at eLab.  And ...what we're dealing with here is a series of images that are really produced on the computer and shown online and therefore exist in a virtual reality before they become an actual reality. ... so what we have is a virtual reality within a second virtual reality of the eLab project.” 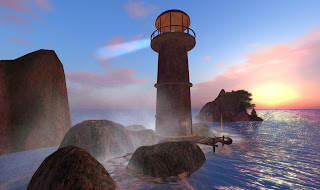 There are many other sites within eLab City East and West to explore.   Unfortunately, the third sim, Northwest Island, is not going to remain.  It can be found at Island of the Lost - NW, eLab City Northwest (16, 129, 30), although how long it will be there is not known.  It was not part of the original plan.  Unlike the rest of urban  eLab City, it is a nature lover’s delight.  There are miles of rocky coasts, and plenty of sea life.  Orcas and sea lions can be found at NW, eLab City Northwest (104, 226, 21).
As to the future of the original eLab City, Professor Lax told me that he is “exploring some ideas for using it in new academic research projects.”  The research is on hold at the moment, but Professor Lax said that  eLab City East and West are funded through 2014.  “SL remains unique in its combination of a dedicated user base, outstanding collection of user generated content, and a functioning virtual currency,” he said.  “For me, these three factors make SL very useful for academic research on user behavior in virtual environments.”
He stated that he is “interested in connecting with like-minded others who might be interested in forming a research community centered around eLab City.”  He pointed out that “it could serve as a virtual campus for a community of Second Life researchers who are looking for a common home in which to explore ideas. “
Grey Lupindo
Posted by Bixyl Shuftan at 6:00 AM