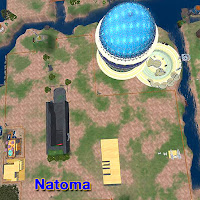 Natoma is a sim that I have visited many, many times, and if you are a content creator, you may have been there often yourself. I was a bit concerned about completing this article, because, of all the first 16 first sims, Natoma is the only one that is always full of residents.

Natoma has an illustrious history that is marked by several prominent landmarks that have been on the sim since the Alpha days of 2002. The Statue of the Man and the Alberto Linden Gate (October, 2002) 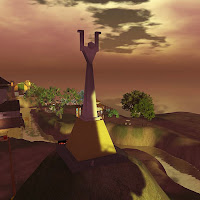 The Man Statue dates back to July of 2002, making it the oldest structure in Second Life™. It is a remnant of the Alpha stage of development when SL was called Linden World. Over the years, the face of Natoma has changed a lot. It once was home to the Welcome Area (The Newbie Corral) and Avatar Central. Avatar Central was owned by the Lindens, and provided a space that allowed any residents to drop items for sale.  Avatar Central is long gone, and the Welcome Area has been moved to other sims. All that remains of that build is the Arch D’Linden, which is the build by Alberto Linden that sits in front of the Ivory Tower Library of Primitives.

The Ivory Tower Library of Primitives 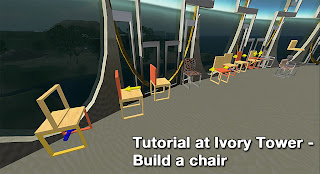 My first days in Second Life™ were characterized by “newbiness” of historic proportions. I had not been a gamer, and I came in with the podcaster rush of early 2006. The minute I saw that I could create content I was hooked. However, I had no idea what to do or how to do it. Someone told me that there was a place I could go to learn how to build, and that’s when I paid my first visit to the Ivory Tower Library of Primitives (ITLP). At that time it was on the sim of Noyo. It moved in June of 2006, shortly after my first visit.

I will never forget that it took me a whole long day to complete the tutorial on building a chair. Completed, the chair looked a bit more like a broken table than a chair, but I was very proud. However, the proudest moment at the Ivory Tower was when I met Lumiere Noir, the creator of the ILTP. His avatar was like the old Spy vs. Spy character from Mad magazine. He was friendly, encouraging, and committed to making sure that all residents knew how to build. Although he doesn’t spend much time here, he drops in from time to time to say hello. Much of his duties are handled by an avatar named Avi Arrow.

Actually, there are no residents living on Natoma. That is, except for Luke Lorentz, who is 9 years and 9 months old, and has a small parcel on the western edge of the sim. According to the denizens of the ITLP Sandbox he has not been around in many years, despite messages left on his profile. The Ivory Tower regulars…the Dwellers, would love to see this parcel come up for sale, but it remains untouched.

The Ivory Tower Dwellers are a group of people who seem to be at the Sandbox on Natoma at all hours. I know they do leave for a bit, because I have met them at Linden and Sculpt Studio Office Hours , but they really prefer hanging out in the shadow of the exquisite Ivory Tower, socializing, playing, but above all building, building, building. Most of them are friendly to newbies and oldbies alike. When I wrote about Minna you met Kennylex Luckless, who spends most of his time on Natoma. Another person who is usually fiddling with prims on the sim is Jack42 Meredith. Jack has always been so friendly to me that I knew he would talk to me about Natoma. I asked him how he came to spend most of his time here: 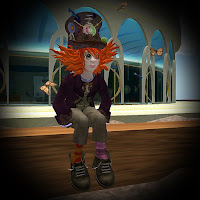 “I first came to Natoma to go through the self-paced lessons in the Tower. I did not know anything about building, and I started at the bottom of the Tower and worked my way up to the top. It took me about two weeks to complete, working a few hours a day. It is a must if you don't know anything about building. After that, I just used the sandbox next to the Tower and I have hung out here every since.  The best thing I learned was building tricks that make building easier with short cuts. I have always directed newbies to the Tower; if they never have done any building. They always seem amazed. Also, I have donated my premium tier for land to Minna with ANSI (Soderstrom) to  try to keep Minna looking nice. I come back to Ivory Tower because it has information in the Tower if you need it while you are building. The people that run it are very good at building, and are usually here for advice. And…it’s a good hangout spot when it’s not laggy.” 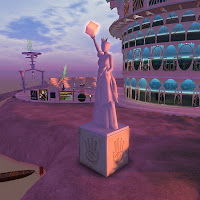 Another denizen of Natoma is Marcov Carter. You can see his work all over the place on Natoma, and he is very generous with his freebies. I especially love his Toony Throne, which he will give you gladly, if you ask. His version of the Statue of Liberty, lofting a box prim on high, stands in one corner of Natoma, greeting residents from all lands.

Throughout Natoma, and Minna, Clementina and Zoe for that matter, the name that is mentioned most often is Avi Arrow. Avi is the point person for the maintenance of these sims, and I was able to track her down for a short interview:

SLNewser: As I traveled around Natoma, Zoe, and Clementina many residents mention your name. How is it that you came to be the administrator for these areas? 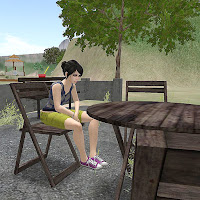 Avi Arrow: Lumiere Noir, creator of The Ivory Tower Library of Primitives (ITLP), befriended me my second day on the mainland here in Natoma and I’ve been here ever since.  Five weeks later Lumiere sold me my first parcel in Zoe. Literally, 15 minutes prior to this I purchased a first land parcel elsewhere and sold it three hours later.  Thus began my land business.  Eventually, I acquired most of Zoe and Taber, and a substantial part of Clementina.  These properties I considered my “home” properties.  Some of these properties, including parcels in Natoma have been, subsequently, donated to the ITLP land group which now manages the majority of these properties among others in Minna and Tehama.  My relationship with Lumiere is being one of close, dear friends, and partners.  We are partners in that we share most everything with each other as it relates to the properties I mentioned above.  Lumiere donated the bulk of the Natoma property to IToP group when he first formed this group with Ryan Linden.  Lumiere's natural inclination is towards creating and teaching.  I am also creative and I enjoy instructing, however I have a natural talent for managing people and property, so it just progressed that I ended up managing the properties and the group while Lumiere focused primarily on curating, teaching, and creating.

SLNewser:  Please tell me a little about how you learned about SL, what it was like for you when you were new, and what was it that kept you here?

Avi Arrow: I began building in virtual environments in 1996 in Active Worlds.  A friend I met in 2004/2005 in Active Worlds brought me to Second Life™.  I basically came here to continue with my building, but soon found other interests (as mentioned above), which are mostly what have kept me here.

SLNewser: sense that you have a commitment to keep SL beautiful. Can you tell me about that?

Avi Arrow: I was most effective at improving or restoring certain areas of SL back when I was buying and selling land. I could absorb smaller parcels—often ad parcels into larger ones and consolidate properties, often at considerable added expense.  (ED note: If you don’t remember the blight of ad farms look at this link: http://15timez.blogspot.com/2007/04/ad-farms.html ) My motivation for doing this was not always altruistic, though, as it was often the case I did it to protect or improve my own investments.  More to the point, and try not to roll your eyes, but I believe the land in here has soul just as it does in real life, mother earth and all that.  There are living memories here that are associated with the land and I believe these memories carry over and linger.  The old beta sims are sacred.  I love legacy.  What most people do not really think about is that what has transpired virtually here in SL is actual human history.  I think it important to protect as much of this as possible.

Well, I am not rolling my eyes at all. I believe that the old sims are hallowed ground, or I would not be doing this series. Thanks, Avi, for your thoughtful words, and dear readers, do take the time to visit these sims. Second Life™ is about to become ten years old, and that is history.