Visiting Down Under: SL Australia

Recently I took a trip to SL Australia, located at Australia (165, 82, 28).  This sim is owned by a group of Australians who wanted to have an Aussie meeting place, as well as a place where people from other countries could come and enjoy life down under.   They have created a fun as well as informative site. 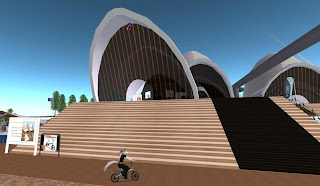 One of their notecards states that Australia is the sixth largest country in the world.   Like its RL counterpart, SL Australia is also very big, with lots of unusual things to do and see.     There’s a lot of free transportation to help you get around, including a monorail, bicycles, jet skis and more.
I started out at the Sydney Opera House, where I also found information about the Sydney Harbour Bridge and some other landmarks.   From there I biked across the plaza to the stores.
The shopping area is small, but it had some unusual stores.  “Stellar”, located on the corner sells, among other things, both drapes and vampire ears.    Another unusual store is “Dingo Mojo” where you can buy Aussie plants, including an Aussie Beer Tree that gives out bottles of beer.   They also sell lorikeets, cockatoos and other Australian birds. 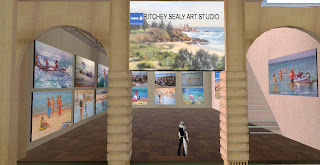 Located in the middle of the shopping area is Ritchey Sealy Art Studio, which is owned by a RL Australian artist.   In SL he is Ritchey Jacobus, and he has been a resident for over 6 years.  His studio is very large and filled with paintings of Australian beaches, the sea, and some towns.    They are all for sale at a very reasonable price, $50L.   My favorites were of life in Moruya, a town that I had never heard of but looks like an interesting place.  When I visited, Jacobus also had paintings on display behind one of the monorail stops at Australia (175, 6, 47).  Here there were paintings of other aspects of Australian life, including kangaroos.  It’s always interesting to see a RL artist come into SL, especially when the subject matter is different and as well done as these paintings are. 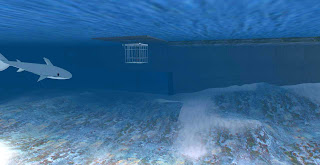 In RL the Great Barrier Reef is located on the northeast coast of Australia and is home to exotic sea life.  In SL Australia you can rent scuba equipment from a dive shop located near Australia (37, 96, 22).   I rented their equipment for $20L for 10 minutes, which was plenty of time for me.   Although the coral and plants were pretty, I saw a Great White Shark that sent me topside.   But for braver residents, the equipment can be rented for longer periods of time.   When the HUD is worn, gauges and other instruments appear.   I have never used scuba equipment in RL so I don’t know how authentic this HUD is.   But it was fun, at least until I saw the shark.  Inside the dive shop is a stylish wet suit that is a freebie, whether or not you rent the scuba equipment.
Jet skis are available for free so I hopped on one to tour the harbor.     While I was touring I spotted a diving cage exhibit that looked interesting and a 7 Seas fishing area located at The Shed, Australia (75, 180, 21).   I stopped to fish long enough to catch a Common Green Clownfish and an Uncommon Ultra Violet Mutant.   But I decided to save the diving cage for a future visit.   I had had enough of sharks for one day.
I stopped by the Dingo Bay Hotel, which appears to be brand new.   There were plenty of tables and chairs, a dance ball and lots of room to use it.    No one else was there when I visited, probably due to the time difference between my RL location and RL Australia.   There’s a sign where anyone who is interested can get notices of upcoming events. 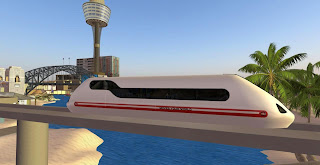 My vacation time was nearly up, but I wanted to ride the monorail before I left.  I climbed the steps to the platform and waited for a train.  It came quickly, but I had trouble getting into it.  I slipped between it and the railings on my first try and landed in the harbor below.   I climbed back up and waited for the next train.  This time I boarded by going directly into a seat instead of trying to walk into the train car.  This approach worked perfectly.  The monorail is great.  It shook and made noise just like a real train.  It goes pretty fast, and you can get a quick overview of the site.
I rode the monorail around a couple of times without any problem.    As I rode, I could see that there were many other places that I will have to return to visit.    I plan to do that soon.
Australia (165, 82, 28)
Grey Lupindo
Posted by Bixyl Shuftan at 6:00 AM